TALENTED young agri-leaders from Australia and New Zealand are being urged to apply for the 2019 Zanda McDonald Award, which opens for entries on Monday.

The prestigious annual award for young industry stakeholders carries an impressive prize package worth more than $50,000. 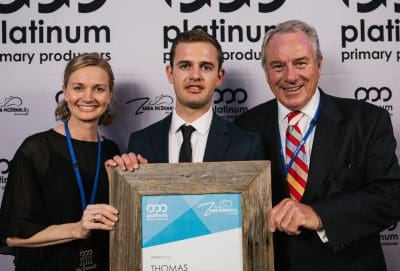 Now in its fifth year, the award provides the winner with an all-expenses paid trans-Tasman mentoring trip, $1000 cash, a place on Rabobank’s Farm Managers Course, and access to the Platinum Primary Producers (PPP) Group – a network of over 150 influential agri-business men and women from across Australasia.

Chairman of the Zanda McDonald Award, Richard Rains, said the award provided a fantastic opportunity for young agricultural leaders to further their career and their personal development.

“The mentoring package is quite spectacular. It is tailored to the recipient’s needs, and provides them with a great insight into some of the best farms and agriculture companies on both sides of the Tasman, through the PPP network. This delivers huge opportunities for the winner, and can really help take their career to the next level,” Mr Rains said.

Applications are open from Monday, to individuals aged 35 years or younger, and close on Friday 24 August.

Thomas Macdonald (no relation) is the current award-winner, and was crowned with the title at the annual PPP conference in Taupo in March this year. Mr Macdonald is the business manager of Spring Sheep Milk, in Taupo NZ.

“It’s been a real privilege to win the 2018 award. I’ve already made some great contacts, and am really looking forward to learning how their businesses tick, and the ways I can incorporate these learnings into my own career.” he said.

During the Australian leg of his mentoring tour, he will visit PPP members including the McDonald beef cattle operation in North Queensland, which is run by the late Zanda McDonald’s parents and wife Julie, managing about 180,000 head of cattle.

Zanda McDonald was a prominent identity in the Australian beef and livestock industry and a foundation member of the PPP Group. He died in April 2013 at the age of 41, following a tragic accident on his Queensland cattle property. Launched in 2014 by the Platinum Primary Producers (PPP) Group, this award was born out of mate-ship and respect for one of agriculture’s natural leaders.

The PPP Group is a collective of over 150 of Australasia’s most influential rural leaders, representing over 12 million hectares (28pc) of farmland across the two countries and over 20 million livestock units.

The award is open to passionate and determined individuals under the age of 35 years who are currently working in the agri-business sectors of either Australia or New Zealand, and who demonstrate natural leadership ability.