Dingo control no harm to wildlife 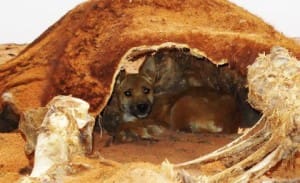 A dingo shelters in a cow carcase in northern South Australia.

Limiting the dingo and wild dog population has no negative effect on wildlife, according to new research.

A study from the Invasive Animals Cooperative Research Centre (IA CRC), Biosecurity Queensland and The University of Queensland shows that control methods such as baiting does not harm the wildlife population, or give an advantage to other predators.

“We found the fox and feral cat populations do not get out of control when you bait dingoes and wildlife declines just don’t happen,” he said.

“Some scientists and groups advocate the banning of dingo baiting in an effort to safeguard wildlife, believing that dingoes keep down the numbers of middle-sized predators, thereby protecting wildlife.

“Our research results from several large predator control experiments show current baiting programs in the rangelands do not lead to declines in wildlife.

“The lethal control of dingoes had been predicted to harm wildlife populations by releasing fox and feral cat populations from the suppression of dingoes. This does not happen.”

“If lethal dingo control was harming wildlife, then we would expect to see less of them in places where dingoes were subjected to baiting,” he said.

“We found that there was just as many, or more, wildlife in the places where we did bait dingoes.

“These results are reassuring about the ecological outcomes of predator control in our pastoral ecosystems.”

This work is part of an ongoing series investigating the responses of predators and prey to dingo and wild dog control across Australia. Other published works can be found in the journal Ecological Management & Restoration.

The research report published in the Frontiers in Zoology journal is a collaboration between the IA CRC, Biosecurity Queensland, University of Queensland and the South Australia Department of Environment, Water and Natural Resources.