Eight young urban consumers and seven young members of the red meat industry headed to Queensland recently to get a glimpse into the Australian paddock to plate journey.

After visiting a farm, a feedlot, a meat processor and various butchers, the participants took part in an intense 48 hour ‘jam’, working together to challenge the way Australians produce and consume beef.

The initiative is designed to help bridge the gap between agriculture and the wider community.

Rindicates that 96 per cent of Australians living in metropolitan areas have little understanding and familiarity of the Australian beef and lamb industry [i], yet the average Australian eats about 30kg of beef per year [ii].

‘My assumptions were completely blown out of the water’

“My assumptions were completely blown out of the water,” 29-year-­old Melbourne fitter and turner, Joshua Polley said. 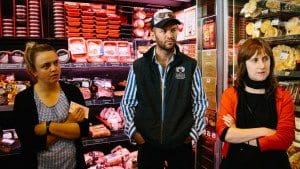 After visiting the processor he commented on the attitudes of the people working in the industry, saying; “They’re not completely desensitised to what they’re doing. They do have respect for the animals but they also understand the necessity for getting meat out there to the public.”

“It’s just been incredible to be able to talk to people face-to-face, and really see that people care,” said Tim Eyes, Farm Manager from Wyong Creek on the NSW Central Coast. “We know that there is this minority of people who are worried and we can help them on that journey, so it’s very inspiring.”

“Opening your industry up to people who have never seen it before can be daunting, but it’s extremely valuable, and it ensures that consumers can make informed decisions about the food they purchase,” MLA’s Community Engagement Manager Jax Baptista, said.

“The BeefJam has really cemented the fact that transparency and being open and honest about what we do as an industry is so important to build trust in the community.”

“So many of us live in cities where we are distanced from our food and the people who produce it,” YFM’s Communications Manager, Helena Rosebery said.

“One of the key goals of BeefJam was to facilitate understanding between the participants, no matter if they were a producer, consumer, meat eater or non-meat eater. When we got them in one room together, we were amazed by the level of connection, discussion and the sense of shared values,” said Ms Rosebery.

Mrs Baptista added; “Collaborating with YFM on BeefJam has been invaluable for MLA and the insights will be used to ensure our community engagement program, Target 100, remains relevant.”