Fancy some squid ink with your burger? 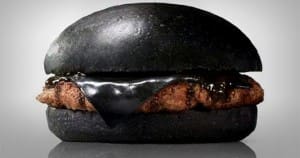 Welcome back to the darkside. Burger King in Japan has re-released its now famous black burgers for a third time after their hit limited-period introductions in 2012 and again in 2013. The Kuro Diamond and Kuro Peal burgers feature ingredients including black garlic sauce coloured with squid ink and a black bun and sliced cheese coloured with bamboo charcoal. As one journalist put it, the black-coloured burgers look like they were stolen straight from Darth Vader’s lunchbox. “The black burgers sold extremely well because of their visual impact, but people continued to come back for them because of their taste,” a spokeswoman for Burger King told Japan Real Time following their release this week. She added that the bamboo charcoal was safe to eat and “adds a nice aroma to the bun as well”. The Kuro Pearl and Kuro Diamond will be made available until early November. The simple Kuro Pearl burger, which has a bun, cheese, patty and sauce, will be available for ¥480 (A$4.95). The deluxe Kuro Diamond burger, which adds a splash of colour to the darkness with the inclusion of tomato, lettuce, and onions, will cost ¥690 (A$7.13).

Meating the needs of the elderly

Deakin University’s Centre for Physical Activity and Nutrition Research (CPAN) has received funding from Meat and Livestock Australia (MLA) to study the effects of protein (lean red meat) and exercise on muscle and cognitive health in older adults.  It will be the first study to investigate the combined effects of resistance training and increased dietary protein in the form of lean red meat on muscle mass and strength as well as cognitive functions like attention, memory, the ability to problem solve, reason and learn new information, in adults aged 65 years and over. “Age-related muscle wasting and a decline in cognitive function have both been implicated in the development and progression of many chronic diseases, including musculoskeletal and neurological disorders such as osteoporosis and falls as well as dementia,” said Professor Robin Daly from CPAN who will head the study.  “Over the next 40 years it is estimated that nearly 25pc of the Australian population will be aged 65 years or over, and so there is a pressing need to identify safe and effective community-based strategies that can simultaneously optimise muscle and cognitive health and function in the elderly.” The findings will provide the basis for more precise evidence-based nutrition and exercise guidelines for the management and prevention of age-related changes in muscle and neural health as well as cognitive and memory function in older people.

A research team from the Australian National University in Canberra has successfully replicated one of the crucial steps in photosynthesis, opening the way for biological systems powered by sunlight which could manufacture hydrogen as a fuel. “Water is abundant and so is sunlight. It is an exciting prospect to use them to create hydrogen, and do it cheaply and safely,” said Dr Kastoori Hingorani, from the ARC Centre of Excellence for Translational Photosynthesis in the ANU Research School of Biology. Hydrogen offers potential as a zero-carbon replacement for petroleum products, and is already used for launching space craft. However, until this work, the way that plants produce hydrogen by splitting water has been poorly understood. The team created a protein which, when exposed to light, displays the electrical heartbeat that is the key to photosynthesis. Co-researcher Professor Ron Pace said the research opened up new possibilities for manufacturing hydrogen as a cheap and clean source of fuel. “It’s the beginning of a whole suite of possibilities, such as creating a highly efficient fuel, or to trapping atmospheric carbon,” Professor Pace said. For more on the research click here

NSW Farmers is urging the NSW Government to match the Queensland Government’s $30,000 in-drought support measures for transport assistance and water infrastructure. NSW Farmers’ drought spokesperson Sonia O’Keefe said the impact of drought had continued beyond June when many of the state assistance measures concluded. NSW Government assistance, like the transport rebate and water infrastructure grants, had been a huge help and it was important they continue, Ms O’Keefe said. “The Premier has now seen the impact of drought in the North West and visited a property where drought preparedness work had been carried out,” Ms O’Keefe said. “We urge the State Government to match the Queensland Government’s in-drought support measures. They are not only appropriate but are also widely supported by rural and regional communities in NSW.”

An historic Central Australian cattle station has received a $45,680 tourism infrastructure grant from the NT Government to diversify its business by offering privately guided salt lake tours and paper making workshops. Curtin Springs Station is a million acre working cattle station 100km east of Uluru-Kata Tjuta National Park. It was the home of the first wayside inn in the region and has been privately-owned by the Severin family since 1956. It has a store, licensed pub, accommodation and camp sites for the drive market which accounts for around 300,000 people annually. The Severin family have been instrumental in the early development of Uluru as a tourist destination.  The grant will be used develop walking tracks and paper making projects that will offer new and innovative tourism experiences for travellers en route to Uluru, whilst maintaining the viability of a working cattle station and boosting the Central Australian economy. The Curtin Springs walking tracks will be strategically located for visitors to experience the pristine salt lakes that form part of the Kalinga Paleodrainage system and the base of Mt Conner. The paper production project uses handmade paper from native grasses believed to be unique in Australia.  The production process will pay homage to the pastoral history of the station by utilising the Old Abattoir.  The diversification of the Severin’s station has been possible by the Giles Government’s reforms to the Pastoral Land Act (NT), which came into effect on 1 January 2014.  The grant is part of a $1.3 million pool of NT and Federal funding for tourism development and infrastructure.  The station is contributing more than $37,000 to develop the two new products.

Export opportunities in the beef industry will be a hot topic at this years ‘Ag in the Asian Century’ conference when exporter Richard Rains addresses delegates. Mr Rains, who sits on the National Advisory Board for the Australian Export Council, will focus his discussion on the pitfalls and opportunities to be found in Asia in the world of beef exportation. The conference, an initiative of the Toowoomba and Surat Basin Enterprise (TSBE), will be held in Toowoomba on October 1 and 2, and Mr Rains will join a leading group of speakers offering invaluable insights into Australian export opportunities. To view the official program and register, visit http://www.agintheasiancentury.com.au.