Will McDonald’s US ‘fresh only’ strategy impact Australian beef exports?

FOOD service giant McDonald’s is on track to transition all 14,000 of its US burger outlets to a ‘fresh only’ (never frozen) offer on patties used in the chain’s flagship Quarter Pounder and other signature range burgers. 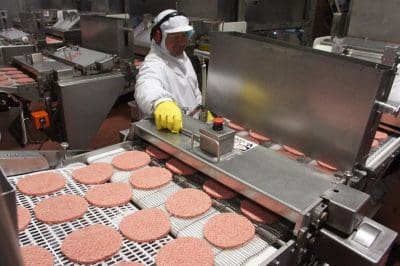 The move has raised some concerns that it could impact on Australia’s trade with the global food service company, because almost all of Australia’s manufacturing beef sold to the US is in frozen form.

The emphasis on fresh (never frozen) burger patties has been a marketing trend in the US burger restaurant industry for some time, and largest player McDonald’s is the latest to engage.

But the jury is still out on how what impact, if any, the move will have on supply.

The fresh beef patties are now available in 3500 McDonald’s US restaurants, and will be rolled-out into all 14,000 restaurants in the US by the end of May. The program covers three Quarter Pounder burgers and Macca’s Signature crafted recipe burger range. All other beef burger patties will continue to be manufactured using a combination of chilled and frozen raw material.

McDonald’s first announced its plan to switch to fresh beef from frozen for the specified burgers in March last year.

The move was the most significant change to McDonald’s system and restaurant operations since launching the all-day breakfast, McDonald’s USA president Chris Kempczinski said earlier. As a result, McDonald’s is changing its distribution process due to shelf-life challenges, and franchisees are reportedly purchasing new refrigerators and containers to store the fresh patties, as well as tweaking preparation lines to isolate raw chilled beef from other ingredients.

Over the past two years, the company had been listening to its customers and evolving its business to ‘build a better McDonald’s’, Mr Kempczinski said, and chilled, never-frozen patties on some burgers was part of that.

The chain’s use of more fresh beef is unlikely to have much impact on the price of domestic 50CL beef or domestic and imported 90CL beef, US trade observers have suggested.

“McDonald’s will continue to use frozen beef in all of its other beef burgers,” one analyst said.

The move would please customers who wanted ‘less processed’ food, but it would make supplying the company’s 14,000 US restaurants much more complicated, the Wall Street Journal said.

McDonald’s is facing increasing competition from fast-casual chains, which have gained ground among customers willing to pay more for meals they see as higher quality – and fresh-only claims are part of that.

“McDonald’s is a burger company and there’s no more important place for it to focus on than improving the quality of its food,” Mr Kempczinski said.

While the likely volume of beef involved would be significant, there were plenty of other very large US burger chains (and even McDonald’s itself, for other parts of its menu range) that continued to rely heavily on Australian frozen trim, an Australian export meat trade source told Beef Central.

McDonald’s uses about 450,000 tonnes of ground beef each year in its US operations. Australia is a substantial contributor to that, accounting for around 120,000 tonnes (2012 company figures) of either manufacturing beef or patties sold into McDonald’s operations outside of Australia. The US is the largest of those destinations.

“I don’t think this marketing move by McDonald’s will matter too much to Australia,” the trade source said.

“If McDonald’s buys less frozen manufacturing beef out of Australia and New Zealand, it also means they will buy more fresh in the US. That in turn means some other guys will move into that space, buying Australian frozen. It may be a different end-customer, but I don’t think it will affect Australia too much.”

But he suggested the decision should not be taken lightly, and only time would tell whether demand and price for Australian lean trim was impacted.

“After all, these are some very big numbers. McDonald’s represents around 4pc of all beef consumption in the US; and within that, the Quarter Pounder (and associated burgers impacted by the decision under the signature range) account for about 30 percent of McDonald’s beef burger turnover.”

“Multiply that by 14,000 stores, and the dumb math suggests that, yes, it is only a single burger, but it still represents a tremendous amount of Australian meat that has to go somewhere else.”