What does second-half of 2016 offer for Aussie beef into the US?

WILL the inevitable shortage of Australian grinding meat over the next six months caused by chronic undersupply of slaughter cattle push our imported beef prices into the US higher?

NZ beef supplies are expected to seasonally decline in July and August, and Australian slaughter, as reported in our weekly kill reports, has been sharply down over the past two weeks, reflecting in part improving moisture conditions in key beef producing states.

US Customs Bureau figures illustrate the impact that reduced Australian kills are now having on rates of import, with calendar year to date entries from Australia as at June 27 at a little over 135,000 tonnes, down more than 31pc on the 197,000t shipped over the same period a year earlier.

Analysts say imported beef is expected to trade at a premium to US domestic in August and September, but not necessarily at higher prices from current levels.

Imported 90CL manufacturing beef was reported on Thursday at A601.4c/kg CIF, but was down marginally in US$ terms due to currency movements to US202¢/lb CIF.

With limited beef supplies from Australia and NZ on the US imported spot market, prices for most beef products  were slightly higher, especially for lean cuts and for slightly fattier trimmings – reportedly as a result of good competition from alternate buyers in parts of Asia.

“It has become quite difficult to ascertain the CIF value of imported beef given that NZ volume has started to really decline and some of the offerings from Australia are way outside where the US market is currently trading,” Steiner Consulting reported in its latest weekly imported market report prepared for MLA.

“There has been a lot of conversation among US importers this year about the potential for a dramatic decline in Australian beef availability if moisture conditions improve,” Steiner said.

The last couple of weeks had provided a reminder of that potential. Parts of NSW, Victoria and Qld received 25-50mm of rain and slaughter numbers show a significant fall-off even from the slaughter levels we saw in May. For the two weeks starting 17/6 and 24/6, Australian slaughter averaged 128,369 head, down some 25pc from a year ago and also 12.7pc lower than the May weekly average.

The decline in Australian cattle slaughter comes at a time when NZ slaughter also seasonally declines. New Zealand numbers are reported with a three-week lag, but Steiner estimated that current weekly kill across the Tasman is around 45,000 to 48,000 head, compared to a May weekly average of around 80,000.

“We are in a very different supply environment and this will be reflected both in terms of shipments to the US market and prices.” 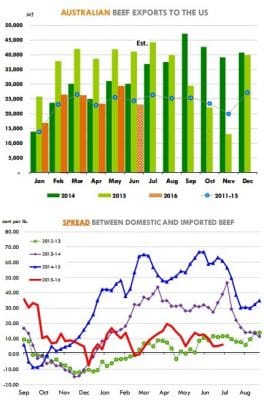 The two charts published here illustrate these points. Australian beef shipments to the US in May were 29,325t, 30pc lower than a year ago. Imports of 90CL beef from Australia in May were 6376t, down about 3451t (-35pc) compared to a year ago.

With Department of Agriculture results for exports in June yet to be released, Steiner anticipates Australian shipments to the US in June to be below 23,000t, down 44pc compared to last year. If 90CL beef volumes follow the same trend as the last few months, it would imply US imports of 90CL beef in June were just 4800t, down almost 4000t compared to a year ago.

“Consider that a full truckload of 90CL beef is around 18t. In other words, June imports from Australia are down by the equivalent of some 220 loads. And this is only for 90CL beef,” Steiner said.

“The decline in overall imports from Australia this year is down by the equivalent of some 1000 full truckloads, a pretty dramatic decline considering that a significant portion of the imported beef coming into the US does not get in the open market (bought directly from Australian export processors).”

Premiums for imported over domestic US likely, but competing proteins a factor

“It is this extreme shortage of product in the spot market that we think will drive a premium of imported beef to domestic later this summer and into the fall,” Steiner said.

The second chart published above shows the current spread of imported to domestic prices, a spread that will likely disappear as the shortage of imported product starts to become more acute in July and August, Steiner said.

“Does the premium of imported beef to domestic imply higher prices for imported beef? Not necessarily. We think that imported beef prices in the US will still be anchored by the overall price level for lean grinding beef in the US,” it’s latest report says.

“The main challenge for lean beef in the US is that prices remain high relative to the price of competing proteins. Even as lean beef prices are down significantly compared to a year ago, the ratio of that price to the price of chicken breast is near all-time record highs. And it’s a similr story with pork.”

“Higher US cow slaughter later this year and low prices for competing meats should pressure US domestic grinding beef prices lower this northern hemisphere autumn, and possibly imported beef prices as well. This needs to be considered when discussing the potential premium of imported beef to US domestic product,” Steiner warned.

“Domestic cattle supplies are slowly expanding and this implies limited price inflation risk for beef retailers and foodservice operators in the next six months. Some items, however, could see significant volatility depending on promotion activity and export demand.”