BEEF harvested from older breeding animals has traditionally been consigned to lower-value muscle meat and trim markets, but a bold new brand program is looking to celebrate the unique qualities of beef from better-performing slaughter cows.

The recently launched Vintage Beef Co brand program is already gaining some traction with retail butchers and chefs who want to offer something different on their menu or shopfront sidewalk chalk-board.

“Ultimately, the brand is about value-adding these type of cattle and taking them out of the commodity sphere where they might just be used for lower priced export jobs or for hamburgers,” HW Greenham managing director Peter Greenham Jr told Beef Central. “Increasingly, chefs are looking for interesting products add to their offering, and Vintage Beef Co answers this call,” he said. 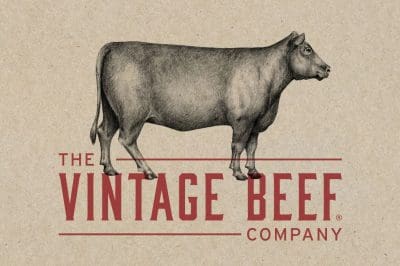 Greenhams has been working with Sydney’s famed Rockpool Bar & Grill for the past three to four years on the program’s development, using the term, Cape Grim Vintage. Other high-end restaurants like Stokehouse have taken trial runs of 20 or so Robbins Island Wagyu cows at a time, mostly the loin cuts, for dry-aging, where the product is offered as a house special – here today gone tomorrow – and treated as something ‘unique.’

“Initially, we didn’t develop the brand with butchers in mind, as the preconception of cow beef in the trade can be fairly negative,” Mr Greenham said. “Side by side, yearling meat and quality cow beef can be very different to look at, with darker meat colour and yellow fat on the older grassfed cows, which requires a degree of consumer education.”

“But now with more consumers understanding that creamier/yellow fat is not something to be worried about, we (and the butchers) can concentrate on promoting the product as one with a strong flavour with more savoury notes,” he said.

Two of the foundations to the program are sourcing cattle with the right genetics and feed history, and a robust grading system.

“We have found that with rigorous MSA grading, we can knock out the darker meat colour bodies and get to a point where the product being marketed under the brand exhibits a nice ruby red colour, and also has some great marbling,” Mr Greenham said.

Vintage Beef Co is being produced through Greenham Tasmania (Smithton) and Greenham Gippsland (Moe) meatworks from British breed beef cows (no dairy cows involved) that are at least five years of age (average is about 8-9 years, having completed their breeding life), or from Robbins Island Wagyu beef cows (ranging from 9-15 years of age). 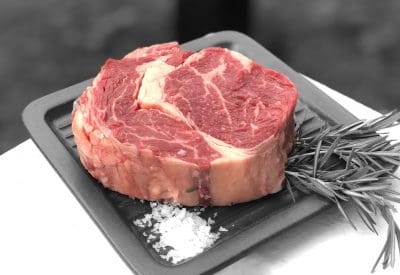 All of the product is 100pc grassfed including the Wagyu, and certified by the third-party audited Greenham ‘Never-Ever’ program. Carcase weights are around 300-350kg.

The product is sold under two grades, based on marbling score: Reserva for MB2+ carcases and Galiciana for MB3+.  About 500 of these type of cattle are processed each week through the Smithton and Moe plants, with perhaps one third of these making the top Galiciana grade of marbling score 3+.

To optimise tenderness and MSA grading performance, the cow beef program employs tenderstretching in the chillers instead of conventional Achilles hanging. Tenderstretching promotes better eating quality in the hindquarter cuts, particularly in the striploins and rumps.

The Spanish references in the carcase grades mentioned above pay homage to the Spanish industry tradition of producing beef from older animals, often ten years of age, called Galician Beef.

In fact to some exhibitors’ surprise, a striploin harvested from an eight-year-old Spanish animal received a gold medal in this year’s World Steak Challenge in London (see earlier Beef Central report), against a field of entries mostly 12-30 months of age.

Vintage Beef Co product is said to be most similar to the Vaca Vieja (old cow) beef from the Spanish/French Basque region in flavour, but the fat coverage/surface of the Australian product is deeper which protects the loin muscle (rib eye, porterhouse etc) during the dry-aging process.

“We are the only product from the Australian beef supply chain with a comparable depth of flavour (due to access to high quality pastures year round) to the European product from older cattle,” Greenhams says in briefing notes to customers.

The other style of Galician Beef as made famous by Bodega El Capricho’s José Gordón is different, as he raises his oxen (steers) on a special diet of grain and grass for more than ten years.

“Whilst that style is incredible, Greenham’s Vintage Beef will have a clean, minerally grassfed flavour with savory notes,” the company told customers.

While much of Greenham’s considerable success in the Natural Beef brand segment through its Cape Grim program focused on the ‘Finisher story’, Peter Greenham said it now saw the opportunity, through the Vintage Beef program, to further develop the ‘Breeder story’ as well.

“We already have relationships with hundreds of high quality breeders who sell us runs of quality finished cows,” he said.

“The idea on the new Vintage Beef website (currently under development and expected to be launched in early 2019) will be to hone in on individual cattle breeders, who can tell their stories, their practices and their breeds and involve them more than they been to date, in the end-product,” he said.

Greenhams has the ability to segment certain runs of cows from an individual producer entering the Vintage Beef program and sell them into larger restaurant groups as ‘specials’ so the farmer story can be carried through to the end-consumer.

“The restaurant has something unique, the farmer can get a plug and the consumer can learn about and try something new,” Mr Greenham said.