US BEEF exporters have mounted a strong case for the waiving of Japan’s Safeguard market protection mechanism, which from today will see tariffs for the next eight months on US frozen beef heading to Japan rise from 38.5 to 50 percent.

As a result, US exporters for the next eight months will pay a 50pc tariff on frozen exports to Japan, while Australia pays just 27.9pc. 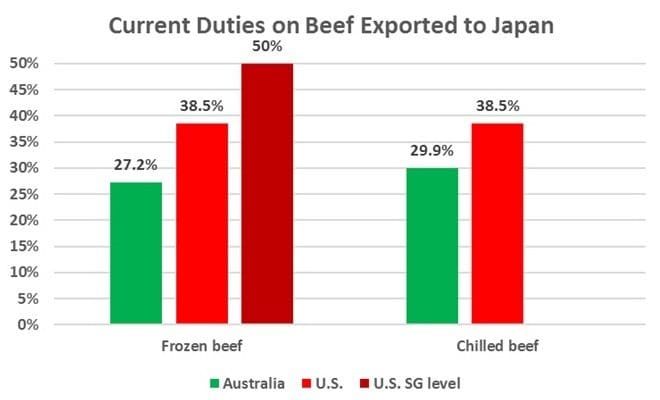 Tariff levels of Australian and US frozen and chilled beef entering Japan, with the safeguard impact presented on frozen for the next eight months in dark red.

In a detailed response after Friday’s announcement, the US Meat Exporters Federation has mounted a vigorous campaign arguing that Japan’s safeguard mechanism is inappropriate in today’s context, because the recent sharp rise in beef exports to Japan:

US Meat Export Federation president Phil Seng said USMEF would work with its partners in Japan to mitigate the impact of the safeguard as much as possible.

“We will continue to pursue all opportunities to address the safeguard situation by encouraging the US and Japanese governments to reach a mutually beneficial resolution to this issue.” 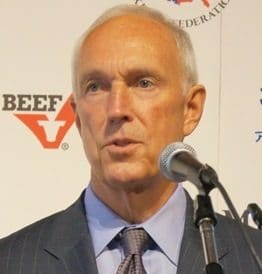 He said the safeguard triggering would not only have negative implications for US beef producers, but would also have a significant impact on the Japanese food service industry.

“It will be especially difficult for the gyudon beef bowl restaurants that rely heavily on USDA Choice grade short plate as a primary ingredient. This sector endured a tremendous setback when US beef was absent from the Japanese market due to BSE, and was finally enjoying robust growth due to greater availability of US beef and strong consumer demand.”

There was still potential to further increase imports of beef into Japan this year, Mr Seng said. “Japan’s beef consumption has been growing this year, due largely to the increase in imports of US beef, and strong consumer demand for US beef.”

The implications for US beef exports were significant, because US frozen beef now faced an even wider tariff disadvantage compared to Australian beef, Mr Seng said.

“The duty on US frozen beef imports will be 50pc, while the duty on Australian beef will remain at the current rate of 27.2pc, as established in the Japan-Australia Economic Partnership Agreement. The snapback duty of 50pc will apply to frozen imports from suppliers that do not have an economic partnership agreement (EPA) with Japan, which are mainly the US, Canada and New Zealand.”

USMEF argues that conditions have changed since Japan established its quarterly safeguards in 1994, and the growth in Japan’s imports this year had not adversely impacted Japan’s domestic beef producers.

“Prices for Wagyu carcases and Wagyu feeder cattle are down from the record highs of last year, but are otherwise the highest in recent history,” it said.

Japan had also moved away from the quarterly safeguard mechanism in its recent trade agreements. Through the JAEPA agreement with Australia, Japan transitioned from quarterly safeguards to annual safeguards, which are much less likely to be triggered. The snapback duties on Australian beef have also been reduced, minimising any potential impact on trade. Japan also agreed to similar terms in its economic partnership agreement with Mexico and in the Trans-Pacific Partnership (TPP), USMEF said.

It pointed out that the US dominates Japan’s imports of frozen beef short plate, a popular cut used in gyudon beef bowl restaurants, which appear on every street corner in Japanese cities.

Short plate, in turn, accounts for the majority of US frozen beef exports to Japan.

“The US industry is able to provide large volumes of Choice grade short plate for use in Japan’s gyudon beef bowl chain restaurants. On the other hand, most of Australia’s frozen beef exports to Japan are grassfed manufacturing beef, but also some grassfed and grainfed frozen briskets, rounds, and other cuts,” USMEF’s statement said.

“Japan has a clear preference for US short plate over Australian brisket/short plate,” it said. “Even though imports from Australia essentially tripled while imports of US beef were still facing BSE-related restrictions, Japan’s total brisket/plate imports from Australia at their 2012 peak of 54,000 tonnes were less than half of the volume imported from the US in 2003 (125,000t).”

“After the lifting of the 21-month cattle age restriction in early 2013, Japan’s imports of US frozen short plate quickly rebounded, and this year would have likely set a new post-BSE high (exceeding 90,000t). At the same time, brisket/plate imports from Australia dropped by half from the 2012 peak, and this year were on pace to total somewhere around 25,000t.”

“The 50pc snapback duty will impact more than 15pc of Japan’s total beef consumption and the higher duty rate will be passed on by foodservice to consumers and/or will result in smaller foodservice utilisation of US beef in their menus due to the inability to offset the higher price,” USMEF warned.

It was not yet clear how much of an impact the higher duty will have on US beef exports to Japan, but it would ‘certainly add costs and dampen demand’ in the largest growth market for US beef – at a time when larger US production is expected in the second half of the year, and thus the need for even greater export growth.

“Meat and Livestock Australia recently raised its production and export forecasts for this year, and thus Australia will be poised to capitalise on the duty differential, although their product is generally less preferred and it is unable to supply the large volume of Choice grade short plate embraced by the Japanese foodservice sector,” USMEF said.

“In this sense, the higher duty is a setback to Japanese beef consumption (which remains below pre-BSE levels) with the potential to reduce short plate prices received by the US industry.”

Effect will be seen across Asia, and the US

USMEF’s statement said there was a chance that demand in other Asian markets such as Taiwan, Hong Kong, South Korea and the Philippines could help limit downside price pressure, but Japan was by far the dominant market for US short plate. So any slowdown in Japan’s imports was going to have an effect in the US market (including on 50CL fatty trim) as well as across Asia.

“It is also not clear how many end-users will be willing and able to shift to chilled US beef, given the associated higher costs and timing/shelf life implications,” MEF said.

At this point, the separate chilled beef safeguard, which currently operates based on pre-BSE 2002/03 import levels, is not at risk of triggering. But if the higher duty on frozen beef causes importers to shift toward chilled product, this risk may increase later in the year, MEF warned.

The safeguards apply only to chilled and frozen muscle cuts, therefore imports of US tongues, skirts and other variety meat will not be impacted.

US versus Australian beef values

US beef values dropped below Australia’s in 2016, reflecting the shift to larger US beef production and herd-rebuilding underway in Australia, MEF pointed out.

“But adding the respective frozen duties of 38.5pc (US) and 27.2pc (Australia) narrows the price gap; and when the 50pc duty is applied to US, US frozen short plate becomes more expensive than Australian brisket,” it said.

“Raising the duty on US from 38.5pc to 50pc is an effective price increase of 8pc and brings the US price 1pc above the price or cost of Australian brisket. It should also be noted that Australia’s prices could ease further in the coming months, as production increases above year-ago levels and exports start to normalise,” MEF said.

Japan had been importing more US beef across all categories, but the growth had been the most dramatic for chilled.

“It will be critical to not trigger the chilled beef safeguard, but there is certainly risk of triggering late in the calendar year, especially if importers shift more business to chilled,” MEF said.

“Short plate and brisket cuts also make up the largest share of US chilled beef exports to Japan, but we have also seen dramatic growth in imports of chuck, clod and round cuts, as well as loins. Australia is still a larger supplier of round and loin cuts, but chilled imports have slowed this year, as the US has become the dominant chilled supplier.”

MEF also raised exchange rates as an issue, pointing out that the A$ had been strengthening over recent weeks climbing from US76c to US80c on Friday. The Japanese yen had been trading in a relatively narrow range vs. the US$, but is weaker than last year even though the yen strengthened back to US112c last week.

“Thus the stronger A$ will only partly offset the widening duty difference. And overall, a weaker yen plus a higher duty on US frozen beef increases the cost of US beef to Japanese consumers,” MEF argued.

As agreed to in 1994 in the WTO Uruguay Round, Japan maintains separate quarterly import safeguards on chilled and frozen beef, allowing imports to increase by up to a limit of 17pc compared to the corresponding quarter of the previous year. The duty increases from 38.5pc to 50pc when imports exceed the safeguard volume.

Japan’s frozen beef imports from the US in the 2016 Japanese fiscal year were lower than in previous years, thus the growth in imports during this first quarter of the current fiscal year exceeded 17pc, driven in part by rebuilding of frozen inventories and strong demand for beef in Japan’s food service sector, USMEF said. The most recent quarter saw strong growth in imports from all of Japan’s main beef suppliers.