Growing demand in China for beef has seen Australian beef exports to the market increase almost 60-fold over the past decade, fuelled by a significant increase in the number of affluent households and demand for premium quality imported beef. 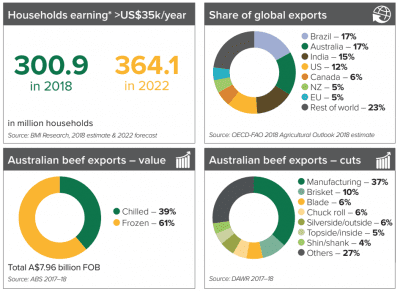 The market is one of several analysed in detail in Meat & Livestock Australia’s (MLA) updated online global and domestic market snapshots released this week.

MLA’s Market Intelligence Manager, Scott Tolmie, said Australia is consistently one of the top beef, sheepmeat and goatmeat exporters globally, however, fierce competition in the international marketplace continues to intensify.

“The growing competition highlights Australia’s need to be even more focused and targeted in key destinations and underlying this will be expanding knowledge of these markets and insights on their consumers,” Mr Tolmie said.

“The updated market snapshots give producers access to in-depth insights into what is driving demand for red meat and Australia’s high quality product in global markets and domestically.

“Australia supplies red meat to over 100 countries and with trade heavily influenced by changing consumer demand in those markets, it is important red meat producers have access to detailed insights.

“The snapshots are designed to provide producers with a better understanding of the markets their products go into, so they are better informed when having discussions with their supply chain partners and making decisions about their own production and on-farm investments.

“Knowing the consumer and operating environment in key markets is critical to ensure the right product is being sent to the right market.”

The snapshots cover eight key markets for beef and sheepmeat, including Australia, North America, Japan, Korea, Greater China, South-East Asia, the European Union and Middle East and North Africa (MENA) region. The goatmeat industry is covered by a global snapshot, which was released in March this year.

Each market snapshot provides a brief, easy-to-read and up-to-date summary covering:
Key consumer insights and future trends
Growth areas across both the foodservice and retail segments
Competitive context and market access
Performance of Australian exports for the latest financial year.

“Opportunities also exist for Australian red meat to enhance its profile in the United States, on the back of growing demand from consumers for products that are more natural, healthy and better for the environment and the welfare of animals,” Mr Tolmie said.

Sheepmeat has continued to see growing demand across a number of Australia’s key markets, including the US and China, but also in smaller markets, such as Korea.

Mr Tolmie said lamb consumption at foodservice has underpinned the rapid growth of Australian exports to Korea in recent years, with the growing popularity of lamb barbecue/skewer products and Japanese Genghis Khan-style restaurants.