IT may come as a surprise given the amount of media attention given to the vegan movement in recent times, but global beef demand, rather than being in decline, is not only growing, but growing rapidly. 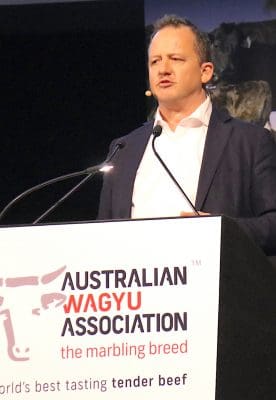 “Despite what you may think when you pick up the newspaper, global beef consumption is consistently increasing, and it is forecast to continue increasing at a greater rate than we can supply,” MLA’s regional manager for Japan and Korea, Andrew Cox, told last week’s 2019 Wagyu Edge conference in Adelaide.

While good news for Australian beef producers, it was also important to understand that prosperity would not simply fall into the industry’s lap.

It is no secret that Australian beef is facing intensifying competition from other well-organised beef producing nations, particularly in Asia which took 73pc of Australia’s beef exports last year.

The US has also now recovered almost all of the pre-BSE market share it held in Japan and Korea, with 41pc of US beef exports going into those two markets alone last year.

Apart from beef from other countries, Australian beef also faces strong direct competition in Asia from lower-priced pork and chicken, and the growing availability of alternative protein products such as plant based ‘meat’.

Volatility is also being driven by slowing economic expansion in key markets such as China, trade frictions from the ongoing US-China tariff war, and the uncertainty caused by the emergence and spread of African Swine Fever.

More specifically, opportunities for premium beef producers such as Australia’s Wagyu industry are being fuelled by rising consumer affluence in those cities and the trend towards “conspicuous consumption”.

Another specific trend driving increased demand for premium Australian beef is the explosive growth of outlets serving Japanese cuisine across Asia and globally.

“When affluent consumers in Asia seek to have Japanese cuisine, they seek to have the best quality and that is where Australian Wagyu comes in,” Mr Cox said.

“These are areas which have really helped Australian Wagyu to proliferate across Asia and I think will continue to do so.”

Australian beef also benefitted from the high levels of integrity in which it was held consumers in Asia and indeed globally, which actually created opportunities for Australian beef in the age of activism.

“Consumers are telling us globally that they will buy products that support their causes, it is one of the demand drivers,” he said.

“As consumers become more affluent, increasingly they seek to buy products that support their causes.

“I think Australia is in a good position in this area as long as we demonstrate continued integrity and continued improvement across these social values.”

Another trend of importance and relevance to Australian beef in Japan is the decline occurring in the country’s own cattle herd, and the growth in its exports of Wagyu. Japanese meat trader and Beef Central contributor Bully Kohno told the conference that the Japanese herd has decreased to 3.85 million head in recent years (see chart below) for a variety of reasons. 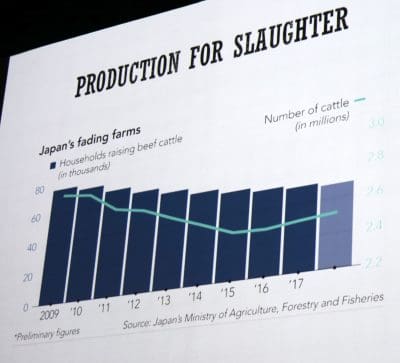 These included the rising age of cattle producers, the high cost of calves to buy to put on feed, the high price of feed, high labour costs, and weaker demand for Japanese Wagyu among Japanese consumers due to high retail price, and the trend towards leaner meat, which was seen as healthier.

As part of this trend some Japanese Wagyu producers were shifting their production from a higher marbling A5 carcase to an A3 carcase (which equates to marbling score of around 5).

At the same time the Japanese Wagyu industry has been working hard to grow its overseas markets, exporting 3500t last year.

Mr Kohno said Japan’s export program was benefitting from efforts by the Australian Wagyu industry to develop international demand for Wagyu over the past 30 years. He said Japanese Wagyu and Australian Wagyu competed at different points of the market and opportunities existed for both countries to work together in future to develop win-win market outcomes for both.

Most of the 3500t of Japanese beef exported last year was very high priced premium Japanese Wagyu which sold mainly into fine dining restaurants in Taiwan, Hong Kong and Singapore. 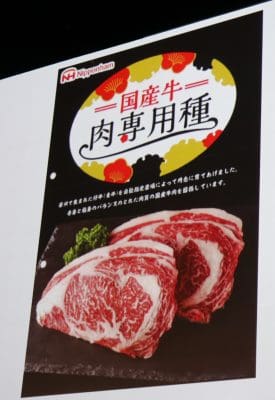 he combination of Japan’s own declining production and its increasing export focus was also opening more opportunities for Australian premium beef in Japan.

This was not just in the form of boxed beef but live cattle, exported as steers and then fed in Japan, before being processed and sold as Japanese beef, as illustrated by the advertisement at right.

“This is an area of growing demand in Japan which is only held back by quarantine space,” Mr Cox explained.

“So in the future in Japan there’s still tremendous opportunity for Australian beef whether it is boxed or live.”

Mr Cox said a future challenge for the Australian Wagyu industry is to clearly differentiate its product from other Wagyu, US Prime and long-fed Angus beef in an increasingly competitive overseas market landscape.