CLAIMS made by ‘parochial Tasmanians’ that their beef and lamb is among the best in Australia can now be clearly supported by statistical evidence, figures presented at a producer form last week suggest. 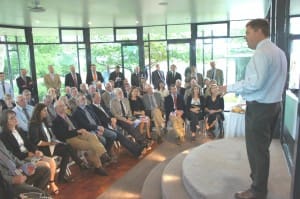 And based on index data collected across more than two million MSA cattle over the past 12 months, Tasmania is clearly at the apex of the Australian beef eating quality pyramid.

“The MSA Index is a true measure of the eating quality of a carcase, based on breeding and producer management inputs, completely free of any processing intervention, delivering a national industry benchmark,” Dr Ball said.

“The Index allows Tasmania to compare itself with other states, or an individual Tasmanian producer to compare his or herself with a neighbour, other districts or states, or nationwide. Alternatively, they can compare their own cattle killed this week with those killed a week, month, or year ago.”

“It’s a powerful tool for the industry to start to grapple with,” he said.

Given the obvious absence of Indicus genetics, and complete abstinence from HGP in the Tasmanian supply chain, it was perhaps not so surprising that the region excelled in carcase quality compared with other parts of Australia.

While the MSA index’s theoretical range goes from 30 to 80 points, the ‘real’ range seen in cattle presented for MSA in Australia goes from about 50 and 75 (the higher the better).

Dr Ball said the top 5pc of MSA cattle in Australia, for example, were now capable of delivering MSA Five Star cube rolls, which were ‘unbelievably good pieces of meat.’

“It just so happens that 20 percent of Tasmanian cattle presented for MSA can do exactly that,” he said.

Because there was considerable variance in breed type, use of HGP (55pc of cattle presented for MSA have received at least one implant during their life), the indexes varied quite widely from region to region. The average Index number across Australia is 56.77 units. The top ten percent of the herd is above 61 points.

“For the first time we’ve been able to show what the average eating quality merit of the Australian beef herd is,” Dr Ball said.

“What I can also tell you is that the nationwide industry has lifted its performance by 1.5 units over the past five years. Australian beef eating quality is tracking up, and we now have a good metric to qualify that.”

“In non-implanted cattle we see a bell curve from index figures in the low 30s to +70. I get really excited if I see an animal with an index figure above 70, and there are some of those evident in the non-HGP graph,” he said.

Broken down by States, here are the averages for MSA Index performance:

“Anything above an index score of 60 is in the top ten percent of performance in Australia, and 90 percent of cattle in Tasmania are doing it – so why wouldn’t you underpin a brand system with that fact? ” Dr Ball said.

“My challenge to Tasmanian beef producers is, if you are not above 60 MSA Index points, then you’re not trying hard enough in the key areas of genetics and management – it’s as simple as that.”

“For JBS and its southern supply chain partners the challenge is to get every Tasmanian animal they can over 60 points. That’s exactly where they need to be, and the region has the capacity to achieve it.”

Ossification recorded in Tasmania was actually a little higher than the national average, but marbling was 68 points higher than the average across all Australian MSA-graded cattle.

While the top Tasmanian animal recorded on the index last year had an index number of 71, equally importantly, there was somebody who had a beast scoring just 41.25.

The Tasmanian MSA index distribution in fact showed that 90 percent of Tasmanian MSA cattle presented were above the national average (mean) of 56.

“You have an absolutely fantastic story to tell down here,” Dr Ball said.

Blowing some industry myths out of the water

He suggested the arrival of the MSA index would help blow a few myths surrounding eating quality and MSA compliance out of the water.

For example, the Tasmania data showed there was nil difference in eating quality between heifer and steers in the Tassie region, when adjusted for all the effects.

“The other big myth surrounds the fact that people say it is really hard to produce MSA cattle across the yearly cycle,” he said.

“The Tasmanian MSA Index across all 12 months shows there is more variation within months than there is between months. You can produce better than average quality cattle right across the yearly cycle.”

With regard to improving MSA index performance in southern production systems, Dr Ball said it was all about two attributes: reducing ossification and increasing marbling.

“Producers can drive ossification down by getting 400-day weights up via Breedplan, and getting earlier maturity; and selecting bulls for more marbling.”

“If you (Tasmanian MSA producers) are not getting MSA marbling scores in the 350s to 400s, you should be looking at that, and it applies equally to all breeds. Again, there is more marbling variation within breeds than there is across breeds.”

Across broader Australian data, a lot of stakeholders thought grainfed and grassfed were quite different in terms of eating quality, Dr Ball told the audience.

“There’s a whole heap of variation there, and it is a myth to say one is better than the other. It’s up to the processor to capture that variation and use it in the brand provenance they are providing in expanding into international markets.”

During questiontime, a producer said that given the impressive results recorded by Tasmanian suppliers for MSA index figures, was enough being done to distinguish and promote ‘brand Tasmania’ as a source of premium grassfed beef.

“Has Tasmania been marketed as a separate product from other JBS beef in the brand programs?” he asked.

JBS Southern’s Robert Ryan said JBS promoted ‘Tasmania’ in everything it did within its Great Southern program.

“We have some customers who specifically request the Longford Establishment Number (Est. 195 – the number is commonly seen on carton end-panels and cryovac bags containing primals) when ordering, as a means of guaranteeing that source of supply,” he said.

“In those cases, those customers are often promoting ‘Tasmanian’ as part of the Great Southern brand message, where they want to do that.”

“Different international and domestic customers market the product differently. Some are keen to use the ‘Tasmanian’ grassfed identity in their messaging, others prefer to use only the ‘Great Southern’ identity, and still others may use their own in-house brands. Some promote simply that it is ‘grassfed’ or ‘natural’, because their whole business is built around natural foods,” Mr Ryan said.

In a segment like Australian domestic restaurants, customers tended to be very particular not only about using the Great Southern brand, but also the Tasmanian origin, where it was appropriate.

“It’s getting that way more and more in the US food service industry, as well,” Mr Ryan said.

Prt of the reason why Tasmanian-sourced supply was not ‘partitioned’ more within the company’s Great Southern/MSA programs was that having a broader scope brand that also draws on mainland southern Australian supply meant JBS could access much bigger customers and retailers.

“Our capability in having broader scale brand programs is in being able to handle those bigger clients, that smaller suppliers may struggle with, and value –adding items in the carcase.”

The exception to the above comment was the King Island brand, which was an existing, region-specific brand established well before JBS bought the Tasman business.

“It was part of our commitment to King Island to continue the brand identity after we closed the plant, and we continue to do that,” he said.

JBS brand supply chain manager Mark Inglis said even before the company launched its farm-assured MSA brand programs, it realised that the quality and management of cattle being produced in Tasmania just ‘absolutely matched’ what the company’s customers were wanting.

“The Farm Assurance program really just put a more formal template around what a lot of people were already doing,” he said. “We actually already had a really good basis to start from.”

Mr Inglis said the MSA Index indicated that cattle entering JBS’s the Great Southern and King Island grassfed brand programs were in the top ten percent of all eating quality cattle in Australia based on the MSA index.

“And that includes grainfed,” he said. “That’s a huge pat on the back for all those producers supplying these programs.”

Dr Ball said one of the big points now being better understood was that consistency within brand lines was just as important as the overall mean result, in underpinning the success of brands.

It was one reason why JBS was adopting the MSA Optimisation model, a fantastic tool to manage variation within their brand lines.