Selling the sizzle key to butchers’ future, says Perth’s Apprentice of the Year TWENTY year old Chris Lukaitis, the Australian Meat Industry Council’s 2017 apprentice of the year, says ‘selling the sizzle’ is the key to success for independent butchers in an increasingly competitive retail marketplace.

Chris was announced as the apprentice of the year at AMIC’s national gathering in Tasmania recently.

He works with legendary Perth butcher and meat advocate, Vince Garreffa at Mondo Butchery and Deli in the Perth suburb of Inglewood.

Chris is in his third year of training, and is due to complete his apprenticeship in June.

“Growing up in a large Greek family, food has always been my passion,” he told Beef Central.

“I was working in customer service in a pharmacy after leaving school, and saw an opportunity to move into retail butchery, combining my strong interest in food with serving people,” he said.

“As Vince has taught me, successful meat retailing is not about simply selling meat, but selling the sizzle, and putting a smile on customers’ faces in what they can do with the product,” he said.

“There’s great satisfaction in giving them something they can take home and prepare and cooking for the family, allowing the group to sit around and have a laugh, and eat good food.”

“As independent butchers, the customer service aspect is just so important, compared with supermarket retailing. We try to provide a lot more of an experience for customers – whether that be discussing menu or food preparation ideas, or simply talking about the footie,” Chris said.

“It’s about relationships, and many customers genuinely look forward to coming into the butchery during shopping.”

“It’s the point of difference for good independent butchers, which we’re renowned for. It’s about relationships, and many customers genuinely look forward to coming into the butchery during shopping.”

While Chris enjoys the customer interface side of the butchery business, he equally gets satisfaction out of breaking down a side of good quality yearling beef behind the scenes. “I’ve always had a passion for good customer service, and basically my aim is to put a smile on their face, before they walk out the door, and give them a product they are confident they can do a good job on in the kitchen. It’s a rewarding feeling.”

Asked how much of a challenge red meat retailing was in recent times, as wholesale prices have risen, Chris said it depended on the type of clientele and the local demographic.

“I’ve worked in three different sites now, each with different local income levels and spending power. Each has to be treated differently, marketing what best suits the clientele in the area, based on cuts – especially as prices are high.”

Part of the way of the future for butchery could be in diversifying offers away from simple ‘trays of red and white meat’, Chris believes.

“In our Mondo Butchery shop at Inglewood, for example, we also have a delicatessen. I think more butchers will seek to do this, in different ways, so the customer will come in not only to buy their fresh meat requirements, but also other items. In our case we sell pasta, we sell sauces, we sell pre-cooked meals. Convenience is becoming increasingly important – taking it to the next step.” 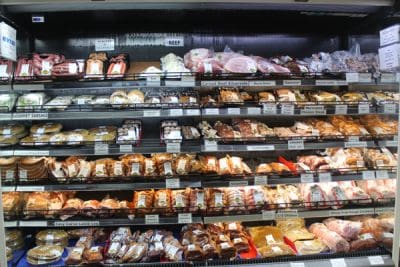 Packaged and processed meats on display in the deli section at Mondo Butchery. Click on image for a larger view.

“Doing those little things that supermarket retailers can struggle with is part of the answer.”

But it made it hard when supermarkets are selling meat at a price that in some cases butchers cannot even buy into the shop at.

“For us, specialisation, convenience and gourmet value-adding is the key. But by the same token, it’s good that every butcher shop is trying to do slightly different thing, in the value-added area, providing their own signature.”

Chris said he had learned a great deal in attending the recent 2017 AMIC national gathering in Tasmania, and a similar event in Queensland in 2016.

“All of the apprentices who competed got a lot out of it, in the ability to network with other top butchers and learn along the way,” he said.

Runners-up for AMIC’s 2017 national butchery apprentice title were Ben Floyd from Rode Meats in the Brisbane suburb of Stafford Heights, and Reece Jeffree from Bruce’s Meats in Mitcham, South Australia.