THE writing could be on the plate for Australia’s first pop-up fully 3D-printed restaurant.

And beef and lamb and will be on the menu, if Meat & Livestock Australia has anything to do with it.

MLA supported the successful 3D Food Printing Conference Asia-Pacific at Monash University in Melbourne on May 2, which explored red meat opportunities for the technology.

“While results and feedback from the event is currently being collated, the conference generated significant interest within Australia and internationally, particularly around the potential opportunities for the red meat industry to utilise 3D printing technology.”

Mr Lee said there was “early interest” in a pop-up 3D-printed food restaurant company to come to Australia.

“This would include a lamb dish and all other consumables – even the plates, tables and cutlery all being 3D-printed,” he said.

MLA is in preliminary discussions with the company, which has not been named, but it is not Food Ink, which has already launched a 3D-printing restaurant in the United Kingdom.

Food Ink – an initiative that brought together architects, artists, chefs, designers, engineers, futurists, industrials, inventors and technologists – launched the world’s first 3D-printing restaurant in London last year, providing a “one-of-a-kind gourmet experience in which all the food, all the utensils and all the furniture are completely produced through 3D-printing in an immersive futuristic space”. 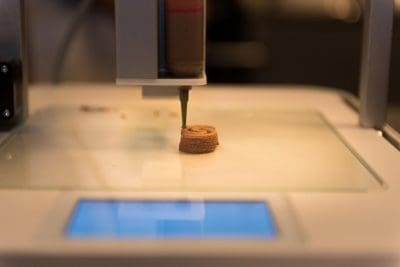 “For example, in the aged care sector, 3D printing provides an opportunity for the red meat industry to offer high protein and nutritious meals that can be presented in various shapes and sizes, and more appetising than the traditional pureed food.”

“This is a sector that has not necessarily been open to traditional red meat products due to issues around chewing and swallowing whole cuts.”

Mr Lee said the MLA Donor Company was now actively seeking expressions of interest from industry to partner with in the 3D printed technology space.

“Identifying the right usage and occasions for 3D printed meat, the target market and the business model innovation required to deliver will be key activities.” He said MLA was seeing a number of innovations in response to the “designed for me” and “personalised nutrition” trend and would consider the benefits for 3D printed meat products, made with 100 percent meat and with softer texture and perhaps also with inclusion of vegetables, could be a great opportunity for kids snacks and also for aged care.

“We have also seen Michelin star chefs begin to use 3D printers for creating amazing deserts and confectionary – this also is an exciting area for chef inspired 3D-printed meat canapés and tapas.”

Mr Lee said MLA was co-ordinating a program with researchers and 3D printer suppliers where proof of concept 3D-printed meat products can be developed on a small scale.

“We have purchased a unit and have been testing recipes and shapes in readiness for the conference and through the MDC, we are keen to collaborate with interested parties to develop 3D-printed sheep meat products,” he said.