One of the world’s largest manufacturers of beef patties, chicken nuggets and other value-added items for global retailers like McDonalds and KFC, has issued an unreserved apology following damning evidence of serious food safety breaches in its rapidly growing China operations. 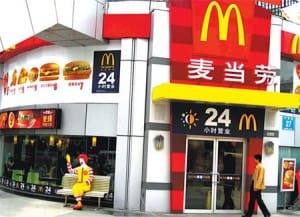 The revelations, which attracted wide media attention in China, come after a string of high profile food safety incidents across the country over the past five years that have severely dented local consumers’ confidence in locally-produced food products.

OSI Group has built an outstanding reputation worldwide over many years for its carefully-managed, systems-based approach to food safety, but the latest revelations are an embarrassing blot on the company’s record of achievement.

The company supplies global fast food chains in more than 40 countries, using a network of manufacturing plants in 17 countries.

In addition to using large quantities of Australian grinding meat in its processing operations across Asia and elsewhere, OSI International Foods operates two large value-adding and further processing factories in Australia, at Blacktown, Sydney and Eagle Farm in Brisbane. Neither is implicated in any way in the latest China food safety episode, discussed below.

OSI International Foods (Australia) produces both raw and cooked meat products including beef patties and meatballs, chicken patties and sausages. Its products throughout Australia and the Asia-Pacific export market.

OSI Group’s China affiliate, which supplies McDonald’s and KFC, was accused in a TV report published on Sunday of using meat that had exceeded its use-by dates, and unhygienic practices.

Shanghai TV aired a seven-minute-long item using footage taken by a reporter who went undercover for two months in OSI group’s Shanghai factory. It showed a batch of chicken breast and chicken skin that had already exceeded its use by date at the time of filming.

The reporter asked, “Is it ok to use them?” and the answer was “no problem.” The chicken was turned into chicken nuggets.

“The rules are dead, and people are alive, that’s simple,” a worker said in the report. “Dead rules and alive people” is commonly used in China to indicate corners have been cut.

The report did not criticise either McDonald’s or KFC, noting instead that OSI, which has production capacity of around 25,000 tons of meat a year in its China factory, was working to deceive the companies’ inspectors.

A clip showed McDonald’s inspection team touring the workshop, while a recorded conversation between workers and the reporter indicated the team wasn’t aware of OSI’s practices.

“We can’t let McDonald’s or KFC know that we add (chicken skin),” the same worker said. “They won’t let us do that. Otherwise, we would lose the contracts. Who wants to do business with you if you break your promise?”

Once the inspection team left the workshop, unqualified chicken nuggets stored in blue bags were put back onto the production lines along with the qualified batch, the video showed.

The report also showed a printed work notice saying, “please help extend the expiration date” on a batch of beef that was already ‘rank’; the expiration was extended for another year, according to the report.

The report also accused OSI group of having two sets of record books, with the video showing a former company inspection staffer in a mask telling the reporter about one set for inspectors and one for internal use.

In a statement issued in the hours after the report was aired, McDonald’s said it had zero tolerance for any mispractices, and strictly abided by all laws and regulations with strict standards for itself and for all suppliers.

“There is no compromise to the well-being and food safety standards that Chinese consumers have come to expect from us,” McDonald’s said.

Yum China (KFC) released a statement saying all OSI-supplied meat products would be removed from its shelves.

Both McDonald’s and Yum China said they may face shortages of some of their meat products.

A statement issued yesterday by the chairman and owner of the US-based OSI Group, Sheldon Lavin, said what happened at the company’s Shanghai plant was is “completely unacceptable.”

Here is the balance of the OSI statement, published in full:

“I will not try and defend it or explain it. It was terribly wrong, and I am appalled that it ever happened in the company that I own.”

“On behalf of OSI, I sincerely apologise to all of our customers in China. We will bear the responsibility of these mis-steps, and will make sure that they never happen again. That is my personal commitment and that of our organisation.”

“For more than 100 years, OSI has provided safe, quality food and is currently operating at the highest standards in 17 countries serving more than 40 countries around the world. So to have this occur at this Shanghai facility violates the tenets of our company and the values we embrace and live.”

“Upon hearing of the Shanghai issue, I immediately sent our best team of global experts from the OSI Group, and more are on their way, to work with the local team to ensure my promise to you today is met.”

“We are very proud of our newest state-of-the-art facility in Henan. It reflects our confidence and commitment in China. We are also pleased that local Chinese authorities have inspected all our other facilities and have found no issues.”