THE latest beef import data for China shows that both Brazil and Uruguay have now moved ahead of Australia as exporters of beef to China.

This is a statistic that highlights the smug complacency that some  Australian farmers and policymakers had about the ‘inevitability’ of Australia securing a major share of booming Asian food imports needs to be urgently cast aside, and some more serious thought given to how Australian agriculture can maximise the benefits available from the Asian food boom, given limited production capacity.

The most recent data on Chinese beef imports highlights that Australia has slipped to third place, behind both Brazil and Uruguay. Uruguay has been competitive for some time (as the following graph to the end of 2015 identifies), but Brazil has rapidly emerged as a major supplier over the past year, and now supplies more than 30% of Chinese beef imports.

China has become the single largest official export beef market for Brazil in 2016. Brazil shipped 71,000 tonnes to China in the first five months of 2016 and most analysts thought this would result in decreased Brazilian shipments through the grey trade (Hong Kong and Vietnam). Surprisingly this doesn’t appear to have affected sales via Hong Kong, which also increased over the same period.

An economic slowdown has impacted overall consumption of beef in China, but demand from a growing middle class has ensured that imports continued to rise. Official beef imports by China increased by a staggering 74pc year-on-year, according to Rabobank’s recent Beef Quarterly Report.

Brazil is now the largest supplier of beef to China, responsible for 31pc while Australia has dropped to third position with 21pc. Uruguay remains the second largest supplier.

Three factors have contributed to the change, Rabobank says. The first is that the Chinese government has wanted to diversify its sourcing options across food and agriculture. The second is reduced supply out of Australia, and the third is the rise in beef availability and favourable currency movements in Brazil, leading to competitive pricing. 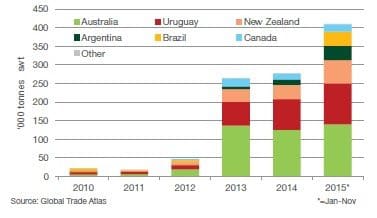 This graph is as much a reflection of the limits on Australian production capacity, as it is an indicator of the emerging ability of South American nations to meet the quality and biosecurity standards required by the emerging Chinese middle classes.

The fact that a number of Brazilian beef processors have been able to gain approval to export beef to China highlights that Australia’s previous competitive advantage as a supplier of ‘safe’, disease-free beef is not something that will be sufficient in the future to ensure that Australian beef exports remain competitive in these markets. These numbers are also a reflection of the fact that South American beef producers have a much lower cost of production and are therefore very cost competitive, especially at present when a shortage of supply has pushed Australian beef prices to record highs.

This should be a timely reminder to all in the industry that, despite the cost and the paperwork associated with systems such as the National Livestock Identification Scheme and National Vendor Declarations, these constitute a very important part of the marketing package for Australian beef – which is at a premium price in comparison with major competitors.

This is also a message that extends much more widely to the full range of Australian agricultural exports to Asia. In the absence of very focused attention to safety and quality at both a national and brand level, South American and Eastern European agricultural exporters will be the main beneficiaries of the Asian dining boom.