That’s an increase of almost 200,000 head on the previous year, mostly driven through existing MSA licensed processors, now 43 in number.

All states recorded an increase in MSA beef grading activity.

Victoria, which historically been slow to adopt MSA systems, is rapidly catching up with other parts of Australia, recording a 30pc increase in numbers to 265,000 head (see graph). That came on top of a 59pc increase in volume the previous year, but both figures were coming off a relatively low base.

Season has little effect on compliance

Even with the difficult seasonal conditions faced by producers in large parts of Eastern Australia this year, MSA producers have managed to maintain their compliance to MSA requirements at 93pc – exactly the same as in 2013/14. 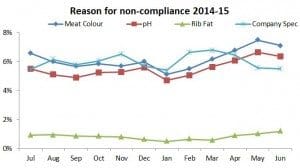 Main reasons for non-compliance – which align closely with previous yearly performance – were high pH and/or dark meat colour. Close to 4.9pc of MSA graded cattle failed to meet the MSA pH upper limit of 5.7, while 5.6pc of cattle presented for grading had a meat colour greater than AusMeat MC 3. As is often the case, some cattle shared both high pH and high meat colour.

There was a slight improvement in the compliance to fat coverage requirements last financial year, typically around 0.5pc of cattle presented, based on rib fat.

The MSA index for beef was also introduced during 2014/15 to provide a meaningful eating quality feedback measurement for producers. All cattle that met MSA minimum requirement and company specifications have a MSA index calculated.

The average MSA index in 2014-15 for all MSA cattle was 57.61 – an increase by 0.84 points over 12 months, a significant improvement in the eating quality of MSA cattle nationally.

MSA producer registrations also continue to grow last financial year, with a 12pc increase in numbers, taking the total number of MSA producers across Australia to 41,973. Of the +4300 new producers, more than 3500 are eligible to supply beef and 2200 specifically for sheep. Producers are increasingly adopting online registration tools with 70pc of all registrations conducted online. 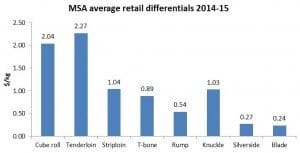 Even with increases in cattle prices this year, the average premiums for MSA continued to grow.

MSA yearling cattle in Queensland received the largest average premium of 40c/kg (compared to 32c/kg in 2013-14) while average premiums of 26c/kg were reported in NSW, similar to the year before.

During 2014/15, more than 2400 producers attended 51 MSA workshops held throughout the country.

An additional 917 retail, food-service, wholesale and supermarket end-users were licensed to carry the MSA trademark during the year, up 33pc compared to 2013/14. There are currently 346 MSA-licensed wholesalers supplying 3330 MSA-licensed food service and retail outlets across the country.

Independent butcher surveys conducted throughout the year by Millward Brown suggested 55pc of 1301 butchers surveyed sold MSA beef and provided pricing information about MSA and non-MSA beef. Ninety one percent of those butchers also rated their satisfaction with MSA beef as good to excellent, compared to 90pc in 2013/14.