The decline was driven by ‘proactive investment’ by Coles, including absorption of rising meat costs within the retail margin, plus growing retail competition, Mr Durkin told shareholders. 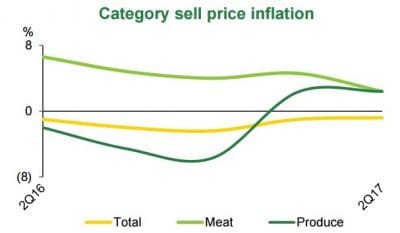 Meat accounted for about 20 percent of the shelf margin impact seen in Coles’ first half result, which became more pronounced in the second quarter (October to December) (see graph).

Red meat is frequently used as a sacrificial loss-leader by major supermarkets, to drive more customers through the door. Woolworths, for example, has recently dropped its already low regular beef mince offer from $8/kg to $7/kg. Competitor Coles has its equivalent 3-star mince this week at $8/kg, while its Everyday (budget) offer is at $7/kg. 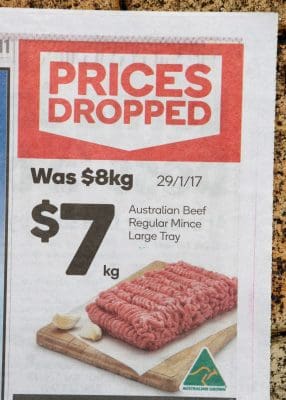 Revenue at $20.056 billion was in line with the previous corresponding period, but when the gains on the sale of Coles’ interests in a number of joint venture properties was removed, earnings declined 6.8pc.

Other metrics including comparable transactions, basket size (average spend per shop) and sales per square metre during the half delivered continued growth.

“The decline in earnings was driven by lower margins following increased investments in customer value, including through the absorption of cost price increases in meat,” Wesfarmers managing director Richard Goyder told yesterday’s briefing.

Significant investment in value, particularly in the second quarter, led to lower earnings despite a reduction in costs, Mr Goyder said.

He said Coles would continue to focus on delivering a strong customer proposition to support long-term growth in earnings and returns.

“In the short term, margin pressures are expected to persist, as the focus remains on delivering customer value in a competitive market.”

Lower food shelf margin is expected to persist through the company’s second half, ending June 30.

Coles online retail sales continue to achieve strong results, with double-digit transaction and sales growth for the first half, compared with the prior year.

In other related financial news announced to the market yesterday, chicken giant Inghams delivered a 14pc increase in profit for the half-year to $51.3m. The company processed 248,000t of poultry for the half year, up 13pc from a year ago, due to strong demand from its supermarket and restaurant customers.

Chicken demand in domestic retail and food service has grown strongly over the past 18 months, as consumers push-back against spiralling beef and lamb prices, and substitute with cheaper white meats.

“As other meat proteins become more expensive, we see growth in chicken, especially over the last period where we have seen customers investing in everyday low prices,” Inghams chief executive Mick McMahon said.