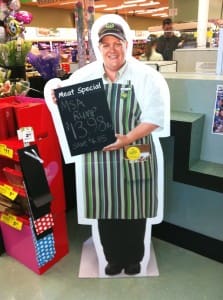 Woolworths’ hold on retail beef market share in Australia has continued to widen in the latest retail survey conducted on industry’s behalf by Nielsen Homescan.*

For the rolling quarter ended April 19, Woolies lifted its share of national retail beef sales to 34.1 percent – its best result in at least three years. The result means Woolies has picked up an additional 2.3pc of the national retail beef market in the past nine months, a strong result in the context of a retail market where movement is often measured in fractions of a percent.

Since January (33.5pc for the rolling quarter), Woolworths has for the first time controlled more than one third of Australian retail beef turnover, by value.

That suggests it is both organic beef sales growth in existing outlets, plus the growing number of new stores, which is driving the company’s retail share performance. Less than two years ago, Woolworths share was 2.7pc less than what it is today, at 30.9pc.

Biggest rival Coles lost a little ground in the latest Neilsen retail survey, accounting for 24.4pc of retail beef sales in the April rolling quarter, its worst result since November last year. After a period of rapid growth in retail share since late 2012, Coles’ performance has eased gently since the middle of last year.

The recent advance by Woolworths appears to have come at the expense of most of its retail competitors.

Independent butchers’ retail share last month was 21.3pc, continuing a gradual two-year decline in share. Butchers have lost 3.7pc of retail share, mostly to the two large national supermarkets, in the past 18 months. Supermarket retail price wars have been a contributing factor.

The independently-owned IGA group logged a 9.0pc share for the March rolling quarter, easing from 9.1pc the previous month, and large 1.3pc decline in total market share since November last year, when IGA was advertising heavily.

Another smaller retailer, Aldi, continues a strong recent growth performance recording a 7.4pc market share in the April rolling quarter, lifting 0.7pc since December, while the ‘other’ supermarkets grouping, including the likes of Costco, independent supermarkets and others, also rose a little to 3.8pc.

For the rolling quarter ended April 19, the Australian fresh meat category (beef, chicken, lamb, pork, seafood) recorded an increase in value of 0.4pc compared to the same period last year. This was driven by a small rise in price (+0.04), coupled with an increase in volume (+0.3pc).

Beef’s value share of overall expenditure on fresh meat protein has decreased by 0.4 percentage points over the most recent quarter compared to the same period a year ago, driven by a 1.7pc decline in beef prices compared with this time last year, despite the small increase in volume (+1.0pc) . Lamb’s value share decline was greater by comparison (-0.88pc), driven by a large fall in volume (-11.1pc).

Value share for most other proteins rose over the same period a year ago, with chicken up 0.55pc (despite a price decrease of 0.08pc), while pork increased in both value and price (+0.81pc and +0.6pc respectively).

In other information of value in the latest Nielsen survey, beef easily retained the highest share of all meat sales against competing proteins, responsible for 36.2pc of all meat sales, up 0.7pc on a month earlier, but almost 0.4pc on a year ago.