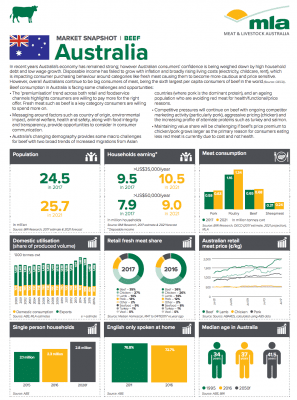 It’s often said that the first rule of business is to know your customer.

A series of reports launched by Meat & Livestock Australia this week give Australian beef and sheepmeat producers deeper insights into what end-customers in 11 key markets are thinking about their product, as well as the trends driving current and future demand.

MLA’s Market Intelligence Manager Scott Tolmie said the reports have been launched to help producers to have more informed discussions with their supply chain partners and to make more informed production and on-farm investment decisions.

“Knowing the consumer and operating environment in key markets is critical to ensure the right product is being sent to the right market,” Mr Tolmie said.

Trends included in the opening February 2018 version of the reports include the increasing interest in steak among consumers in Japan, and the continuing growth of demand for grassfed beef in the United States.

Some examples of information provided on key markets:

Australian domestic market: Australia’s single largest market for beef. Australian consumer confidence is being weighed down by high household debt and low wage growth, causing consumers to be more cautious and price sensitive in categories including fresh meat. However, Australians continue to be big consumers of meat, and the sixth largest consumers of beef in the world.

The ‘premiumisation trend’ at retail and food service levels shows consumers will pay more for the right offer, and fresh meat such as beef is a key category consumers are willing to spend more on.

Challenges for beef include the increased migrations to Australia from Asian countries where pork is the dominant protein, and the country’s ageing population. Older people tend to reduce intake of red meat health/functional/price reasons.

Ongoing competitor marketing activity particularly from pork, aggressively priced chicken and the increasing profile of alternate proteins such as turkey and salmon are adding to the competitive pressures for beef in the domestic market.

Cost is the primary reason for consumers eating less red meat, not health. If beef’s price premium to chicken/pork grows larger it will create competitive pressures.

Beef’s strengths are around its perception of being a ‘trusted quality’.

Overall awareness of beef is high among Australians, with average consumption being around two serves a week (slightly less than chicken). 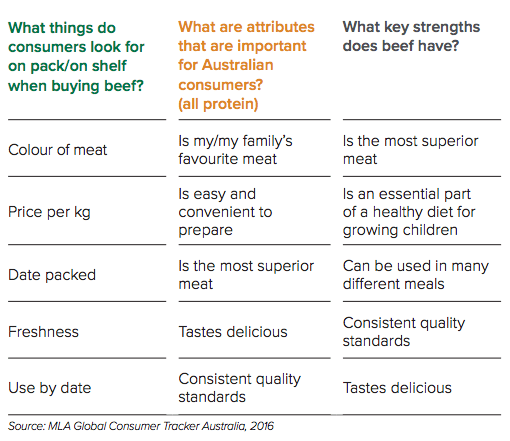 Japan: Australia’s largest export market for beef. Despite an ageing population and declining population, Japan’s affluent and urbanised consumer base will continue to demand high volumes of quality imported beef. However it is facing continually increasing competition from the US.

It will be crucial for Australia to maintain a point of difference, as the mature market status of Japan limits opportunities for significant growth

United States: Frozen manufacturing beef accounts for the largest proportion of Australian beef exports to the US by a considerable margin, but the valuable chilled sector is gradually taking a greater volume share of exports, increasing from 15pc of total exports five years ago to 27pc of total exports in 2017.

Although the grassfed beef retail segment in the US is relatively small, demand for higher value chilled grassfed beef is increasing. Some of the most popular cuts include ground and steak cuts like tenderloin, striploin and rib eye. 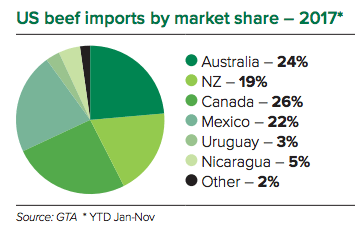 In the retail sector, supermarkets are the main purchase channel for Australian grassfed beef. Limited ‘country of origin’ labelling at point of purchase makes it challenging for Australian product to be differentiated in the sector.

However, shoppers at chain stores which specialise in healthy products such as Trader Joe’s and Whole Foods are more likely to know the origins of their grassfed beef than the average supermarket shopper. This represents an opportunity for Australian beef to increase origin awareness preference. Australian grassfed beef is seen to provide the highest quality steak amongst imported product. 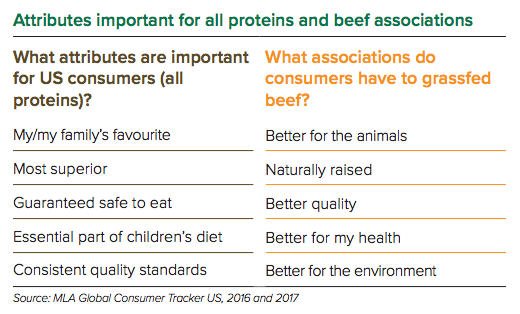 US beef consumption has recovered slightly in 2017 after a period of long term decline.

“In the United States, grassfed beef is a key growth area in both retail and foodservice. Its growing profile in the US has been on the back of strong demand by consumers who perceive it as better for the environment and the welfare of animals, along with it being more natural.”

To see the market snapshots for 11 key markets for Australian beef, click here