Kay’s Cuts: Amazing US price bubble, but is it at risk of bursting? 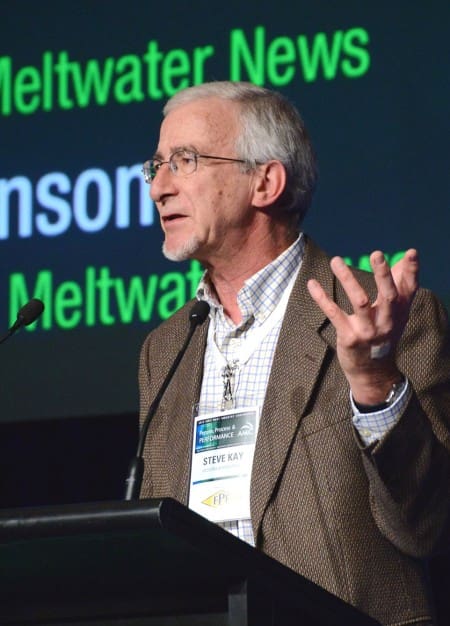 THE record-breaking US cattle and beef markets have everyone agog about what has happened, but also about what might happen next.

Grizzled market watchers (I’m one of those) starting buzzing with anticipation in January when fed cattle prices put in new record highs four weeks in a row.

No one remotely forecast what has happened in the young cattle and fed cattle markets this year.

Prices of US feeder cattle, from calves to yearlings, took a similar trajectory to new record highs.

All these prices are still well over US $200 per cwt and set new record highs again last week. Cattle feeders seem intent on keeping their pens as full as they can and are paying prices for replacement cattle that defy logic.

Cattle placed in July have breakevens that are in the mid-to-high US $160s. Yet the February and April live cattle futures prices are currently barely over US$156. Cattle feeders thus risk losing much of the equity they have earned this year. But that’s the boom-bust nature of cattle feeding.

Prices since then have worked higher each year faster than at any time in industry history. The 2010 price for a grainfed USDA Choice grade steer averaged US $95.38 per cwt. Last year it averaged $125.89, and this year, it might average more than $150. The futures market Monday suggested that prices the rest of the year won’t dip below US $156 per cwt and this was nearly US $7 per cwt discount to last week’s cash prices.

The price acceleration just this year has been breathtaking. The low for the year (US $137.53 per cwt) was set the first week of January. The latest high was US $163.26 per cwt the week before last. That’s a $25.73 advance in 30 weeks. It has left market participants open-mouthed and at the same time wondering when there might be a sharp correction.

That, though, is unlikely to occur unless there is a huge decline in wholesale beef prices. The US beef comprehensive cutout (which includes cuts, grinds and trim) set another new high last week of US $255.78 per cwt. This was the 13th week this year that the cutout has set a new high. But the most startling aspect is that five of those highs came in the last five weeks, when the dog days of summer were supposed to force prices lower.

‘Americans want to eat beef, and retailers know it’

Beef processors have consumers at home and abroad to thank for the market’s remarkable performance.

Now we’re in August, when live cattle and wholesale beef prices normally improve. But with record prices set in July, it’s unlikely the market will rally much this month.

At best, prices might be flat to slightly lower. But there’s little to suggest that wholesale beef prices will collapse.

Beef processors are running at significantly reduced levels to match supply with demand. July’s average cattle slaughter of 580,000 head per week was the lowest for July in years. The only number near as small that I could find was 593,000 head in 1979. Fed steer and heifer slaughter in July was the smallest for the month since 1975.

The wild card is consumers’ response to ever-increasing retail prices. Those prices still significantly lag the record high wholesale prices. The June All beef price of US $5.51 per pound would have to increase to US $5.80 for retailers to restore their beef margins.

That’s a big jump. But the US economy gets stronger every month, as does consumers’ confidence in it. As measured by a monthly index, confidence is now at its highest level since October 2007.

That’s great news for an industry that has to sell the highest price beef and pork in US history.