July shaping up for another boom month in exports to US

APPROACHING the mid-point of July, Australia’s beef exports to the US for the month are shaping up to be an extraordinary 90 percent higher than they were for the same month last year.

The statistic reflects the dramatic turnaround in export trade to the US this year, as the US domestic beef industry continues to face extreme cattle shortage and unprecedented meat prices. 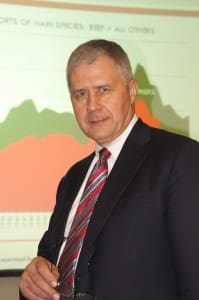 After just 11 days of July, Department of Agriculture trade data shows Australian chilled and frozen exports to the US at 11,553 tonnes. Contrast this with the entire July period last year, at 17,600t.

But in spite of the very large Australian tonnages seen in March, April May, June and now July, prices for Australian 90CL beef into the US continue to climb to unheard-of levels. The market was quoted by MLA on Friday at 528.5c/kg in Aussie dollar terms, about 32 percent higher than this time last year.

US market analyst Len Steiner said this was somewhat difficult to comprehend, given the significant run-up in prices that had already occurred since early June.

The spike in prices was largely driven by very high prices for domestic US product, which caused a number of end-users with the ability to utilise imported beef in their formulas to try and source product in the spot market, Steiner Consulting’s most recent weekly imported beef report says.

As many were finding out, however, spot supplies of imported beef remained very thin at this point, despite very big shipments recently from Australia, Steiner said.

“The issue of volumes is particularly important. Often US buyers assume that because they want to buy multiple loads, they should get a discount that reflects their purchasing power. In a normal market that is well supplied that would surely be the case. But this is far from a normal market,” Steiner said.

Instead a buyer looking to cover ‘big needs’ was likely to have to bid up in order to secure supplies, in a manner similar to having to pay a premium to ‘lure’ product away from other users.

The Steiner report suggested that there was speculation in the market that Australian packers might be holding product back in an effort to support prices.

“With New Zealand’s slaughter season now pretty much over, this implies that Australian packers should be able to better control prices for August and early September needs,” it said.

“At this point, however, we see few reasons to believe this speculation. There is plenty of meat coming from Australia to the US.”

If this export volume materialised, it would represent the largest amount of beef Australia has shipped to the US since the autumn of 2004, Steiner said. 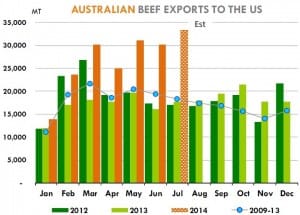 “So if Australia is shipping all this beef to the US, why are importers saying that they are not getting much in the way of offerings? We think a larger portion of imported beef is not hitting the open market, rather it is being shipped directly to US end-users. Also, with domestic lean beef prices tight, most end-users are holding tight to their inventory and are unwilling to sell it off.”

In the past, some end-users would be willing to sell off some imported product in the summer knowing that they could replace it with less expensive domestic beef in the northern hemisphere autumn.

“At this point, that may not be the case given how tight domestic cow supplies have become,” the Steiner report said.

Recently the biggest cow packer in the US announced it would shutter one of its plants due to the shortage of cows available. Weekly cow/bull slaughter has been steadily declining in the US since March, and will likely remain limited through the summer months.

Meanwhile weather conditions have been relatively good and the short-term outlook is for above normal rainfall and below normal temperatures across the US beef regions. This is tends to be bearish for grain prices and bullish for feeder cattle and cow prices.

Pasture conditions remain dramatically better than what was seen in 2011 and 2012.

“Cow-calf producers have all the incentives they need to try and expand the herd and mother nature is providing plenty of help in terms of pasture conditions,” Len Steiner said.

Corn prices for the new crop were currently below $4 per bushel, with speculation rampant that this will be another record crop year. Corn forage supplies should be plentiful going into the winter and so far hay supplies also were expected to rebound compared to a year ago. 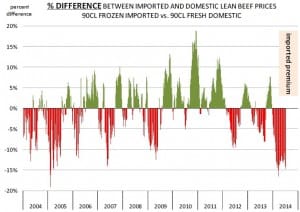 Mr Steiner said domestic lean beef prices currently held a 15pc premium (about US40-45c) over imported beef – a big incentive to try and secure as much imported beef as possible.

“Lean beef is precious at this time and imported beef prices are simply keeping pace with an explosive US domestic market,” he said.