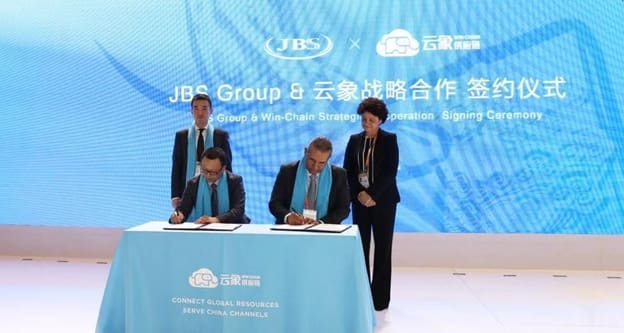 IN one of the biggest meat supply agreements in history, global meat processor JBS has signed a massive US$1.5 billion supply deal with Chinese e-commerce giant, Alibaba.

The three-year agreement, for supply into Alibaba Group’s Win Chain, is worth almost $2.1 billion in Aussie dollars, and is part of a broader A$2.6b supply deal also involving Denmark’s Danish Crown, one of the world’s largest pork producers.

The Memorandum of Understanding was signed during the first China International Import Expo being staged in Shanghai this week, being attended by a strong contingent of Australian meat exporters.

Brazil’s JBS Group is the world’s largest producer of beef, pork and leather and the second largest producer of pork and lamb. JBS is already a significant exporter of beef to China, from the company’s South American, Australian and North American operations. It is unclear at this stage whether supply under the new Alibaba agreement will come from Australia or the US, or specifically from Brazil.

It means Alibaba’s Win Chain is likely to become the largest beef importer in China, at more than 100,000t/year.

MIG director and chief analyst Liu Xiaofeng said the total import volume of Chinese beef had increased from 283,000 tonnes in 2013 to one million tonnes in 2018 (expected), which could be described as ‘explosive’ growth.

“In the big picture, there is reason to believe that China will expand its imports of beef in the future, and will open more countries and plants to meet China’s growing demand for beef,” he said.

Chinese president Xi Jinping mentioned in his keynote speech at the opening ceremony of the China International Import Expo that China’s imported goods would exceed $30 trillion in the next 15 years. As part of a process of fostering imports, he said China would further reduce tariffs, improve the level of customs clearance, reduce the institutional costs of import links, and accelerate the development of modes of new business such as cross-border e-commerce. China would also continue to relax market access, President Xi said.

Win Chain has become an enormous import and export platform for Alibaba, especially in the fresh foods segment. It is driven by data and is a supply chain platform linking upstream and downstream resources to achieve seamless integration between supplier and end user. The company provides processing, warehousing and distribution, supply chain finance and brand marketing to help international suppliers to land in China.

A statement  following the signing of the MOU said in cooperation with JBS, Win Chain would provide JBS with comprehensive solutions for the Chinese market including channel sales, cold chain distribution services, commodity brand co-construction plans, and big data support, to allow JBS’s to rapidly penetrate the Chinese market.

In March of this year, Alibaba announced the launch of its ‘big import’ strategy, and the Win Chain supply chain as the global fresh-harvest platform, and successively reached cooperation agreements with a number of international fresh food suppliers.

Win Chain’s contract with Danish Crown pork, meanwhile, expands an earlier agreement the two sides reached in May. Win Chain will buy the entire production from Danish Crown’s processing plant currently under construction near Shanghai. The 17,000-square-metre plant will produce 14,000t of processed products per year.

Danish Crown has exported pork to China for years, but until now customers have mostly been Chinese distributors and processing companies. Changing consumption patterns in China have allowed the company to execute on its strategy to get closer to the Chinese consumer, the company said.

“The Chinese market is evolving very rapidly at the moment, and there are actually three things happening all at once. First, e-commerce is exploding, with consumers buying the products they want online and having them delivered to their front door only a few hours later. In my view, Shanghai now has the world’s most advanced market for e-commerce,” a Danish Crown spokesman said.

“Next, instead of buying fresh meat at the so-called ‘wet markets’, consumers have started purchasing retail-packed products in the supermarkets, in exactly the same way that we shop in Denmark. Finally, a growing number of Chinese are eating out, similar to the trend we are seeing in the US and Europe. We are now moving further up in the value chain in China, and I see significant potential in this,” the spokesman said.

JBS Brazil was represented at the CIIE Expo in Shanghai by its Friboi and Seara brands; JBS Australia by its Great Southern and Aberdeen Black brand portfolios; and JBS US by its Chef’s Exclusive and Aspen Ridge brands. The brand portfolio focuses on higher added-value products, and products specially designed for the Chinese market. In addition to gaining an up-close view of its customers’ needs and requirements, JBS said it also expected to prospect for new partners and offer solutions for a variety of sales channels in one of the world’s largest markets.