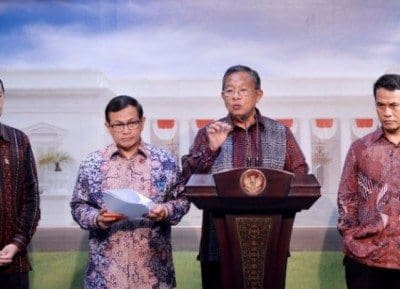 INDONESIA appears to be moving closer to importing beef and cattle from Foot and Mouth Disease affected countries, including India, as it tries to rein in rising consumer beef prices.

The regulation builds on provisions introduced via an amendment to Indonesian animal health laws passed in late 2014.

A number of Australian beef exporters were told by Indonesian importers yesterday that a decree had been passed allowing the import of Indian buffalo meat into the country. Some Indonesian beef customers were reportedly using the information yesterday to try to negotiate cheaper prices on Australian beef.

However, a range of trade sources have told Beef Central in the past 24 hours that while there is renewed noise and strong whispers about the pending trade opening, in essence it is still only talk.

Instigating the latest round of trade chatter was a statement issued as part of a new economic stimulus package issued by Minister Darmin on Wednesday.

The Minister said Indonesia will need to import more than one million cattle this year, and, given its limited options for cattle imports – with Australia its only current supplier – it is now assessing the possibility of importing cattle from FMD-free zones.

A translated version of the Minister’s statement as seen by Beef Central reads:

The government has taken steps to increase the supply or production of beef in the country, such as increasing cattle population, development of logistic and distributions, improvement of cattle and beef trade regulations and institutional approach through establishment of Centre for Local Cattle Farms (SPR).

The Ministry of Agriculture will set out criteria of FMD zone system, as well as determining potential suppliers of cattle/beef products based on OIE risk analysis and regulations.

He added, these efforts require time to develop, and for the time being, import cattle are inevitable to fill gaps. Import cattle can still be done in times of emergency (ie. during disaster events, shortage of meat supply, or when there are rising prices of beef products that could trigger inflation and affect the stability of prices). Import cattle will be only for feeder cattle, and for beef products will only for boneless meat of cows/bull.

This policy is expected to be able stabilise beef supply with affordable prices and increase welfare of local cattle farmers.”

Activating imports of beef, carabeef (buffalo meat) or cattle from FMD-affected sources such as India is likely to take time, however.

Once the regulation is drafted and signed, it will need to be published and implemented.

Under Indonesian Animal Health Law, in the case of livestock imports, a quarantine island would need to be established with the necessary infrastructure before live cattle could be imported.

The Australian industry continues to operate without certainty from its Indonesian trading partner.

The key details of the new regulation will not be known until the implementing regulations are finalised and published. Some sources think the decree relates to meat imports only, while others refer to both meat and livestock trade.

Opening the Indonesian market to a flood of cheap beef or buffalo meat from countries such as India would most likely cause prices to drop significantly for Indonesian consumers. While that would achieve the Government’s aim of reducing inflationary pressure on food prices, it would also potentially devastate many local farmers and feedlot operators.

The potential risk of importing FMD and re-infecting Indonesia’s cattle herd after 40 years of freedom from the disease is also a serious concern for Indonesian cattle producers and for Australia’s nearby cattle industry.

Leading cattle vet Ben Gardiner explained to Beef Central in this earlier article that FMD can be spread via the import of frozen beef.

One trade source who spoke on the condition of anonymity said Indonesia currently presented a very difficult trading environment with Government policy “seeming to change every week.”

Earlier this month cattle importers received a letter advising them that a ministerial decree had been issued imposing a new 10pc value added tax on cattle sales. Two weeks later, in the midst of a butcher backlash against the higher prices caused by the new tax, an Indonesian Minister suddenly announced the policy had been rescinded.

The rising price of beef in Indonesia is driving internal pressure on the Government.

President Joko “Jokowi” Widodo yesterday urged several ministers to take steps to lower the prices of chicken and beef as he began to show more concern over the price increase of both commodities.

“[The issue] has become a major concern and must be dealt with immediately. The President has instructed us to consolidate, specifically the Agriculture Minister, Trade Minister, and Coordinating Minister for Economic Affairs, so that prices can be normalised,” Cabinet Secretary Pramono Anung Pramono said, according to local news outlet Tempo.

Current prices of chicken and beef are now actually higher compared to the Eid al-Fitr period, the newspaper said. Beef is currently averaging about IDR 121,000 per kilogram and chicken is up to IDR 35,000 per kilogram.

Kompas reported beef prices in wet markets in North Jakarta this week at around IDR 130,000 per kg.

The current high prices would appear to be at least partly caused by Indonesia’s sudden decision to cut cattle imports back to just 50,000 head in the third quarter of last year and the flow-on effect that decision has had on reduced beef availability in the market today.

However the Indonesian Government appears to be still placing blame at the feet of a “meat cartel”.

“According to Pramono, the government is currently trying to find the main cause of the price increase while at the same time, trying to find a solution to the problem,” a Tempo article this week said.

“Is it because of the 10 percent value-added tax for food products, or something else?” Pramono said.

“Pramono asserted that in addition to 10 percent value-added tax, another possible cause of the price increase is related to the meat cartel. Pramono said that the President’s attempt to eradicate meat cartel practices has resulted in certain reactions.”

Early reaction from trade sources in Australia suggested if Indian buffalo meat was to find its way into the Indonesian market, the impact would be felt more heavily by Australia’s live cattle export industry than by beef exporters.

Total beef exports to Indonesia last year were less than 40,000 tonnes, a 25pc decline on the 53,000t trade the year before, as part of the Indonesian Government’s renewed self-sufficiency push in commodities including beef. Most Australian beef trade is in lower quality frozen cuts and trim, often used for manufacturing purposes like Bakso balls.

Consequently, any competition from cheap, low quality Indian buffalo meat was likely to have lesser relative impact on Australian beef exports than it otherwise would, Beef Central was told.