How chefs are driving meat marketing and consumer trends WHETHER it is Gordon Ramsay overhauling a modest English café with a foul-mothed tirade or Matt Preston wearing his cravat and using an impressive vocabulary to describe a mouthful of food – the celebrity chef has no doubt become a part of modern culture.

A food industry entrepreneur says the rise of chefs has made them a key part of meat marketing – with chefs being some of the main consumer influencers in the supply chain. 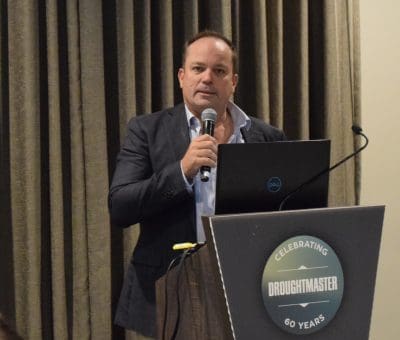 “One thing I have learnt since we started five-years-ago is the importance of chefs, they are the quickest point of market research and feedback,” Mr Brown said.

“They are also very much the celebrities and influencers in the food chain and restaurant owners are desperately trying to get them on board. I heard of a young chef being offered $200,000 to shift restaurants the other day.

“Chefs love farmers too and as they hear you are a farmer, they are keen to hear from you.”

The presentation was exploring the possibility of creating a Droughtmaster beef brand and Mr Brown said the story of Droughtmaster breeders was a good one to tell. He used an example of well-known North Qld breeder Charlie Hawkins – who gave a presentation at one of his company’s events.

“We had 80 chefs in the room, and I brought Charlie along to tell a bit about his cattle, his family, his country and his operation,” he said.

“The next week I had 26 calls from chefs wanting to source Charlie’s beef, even though I said very clearly that we do not have a branded beef product.”

While Mr Brown said chefs were a good way to expose products to the restaurant trade, he said there were plenty of challenges after that.

“The story will get you through the door with chefs, but if it is not a great consistent eating experience they will not come back,” he said.

“That’s the big advantage with the quail, it is the same eating experience every time you eat it. You can also sell the entire animal to the restaurant – you do not have to worry about primal and secondary cuts.”

Mr Brown said price was still an issue for most his customers and meat needed to be competitive.

“I brought an RSPCA free range chicken to Hong Kong and they were all talking about our clean and green virtues,” he said.

“Eventually, they called me back and told me I was $2 more expensive than the Malaysian equivalent – even though they told me they were not interested in Malaysian chicken.

“You see it with beef too, you can get good MSA grassfed cube rolls for $22/kg, which is very competitive.”

“You need to play the long game, we have been operating for five years and this one is looking like the first one we will turn a profit.”