A WAR of words is erupting over definitions of ‘grassfed’ beef used in the Australian domestic market.

At one end of the scale are grassfed brand programs backed by third-party independently audited QA systems, while at the other are supply chains that quite legitimately, under current industry standards and conventions, identify their product as grassfed, while also providing cattle with access to supplementary grain.

In an article published yesterday (more details below), the Sydney Morning Herald claimed Aldi Supermarket shoppers are being charged 30 percent more for prize-winning ‘grassfed’ beef cuts, but suggested the claim was potentially misleading and the medals should never have been awarded.

The heightened sensitivity over grassfed terminology has only really emerged over the past 18 months, as ‘grassfed’ beef has successfully carved-out a niche as a premium product, for which consumers are clearly prepared to pay a higher price.

That price trend has clearly elevated the interest in use of the term ‘grassfed’ as a desirable descriptor in retail and food service segments.

The current industry sensitivity over the use of ‘grassfed’ largely stems from the fact that under current broad industry standards, the term is fundamentally a default for any beef product, whatsoever, that does not align with ‘Grainfed’ cipher requirements.

Essentially, under current AusMeat guidelines, ‘grassfed’ can be legitimately used to describe anything from Brahman scrub bulls caught in Cape York peninsula, to MSA Angus yearling steer grown its entire life on oats near Walcha.

But the fact is that a large portion of beef produced in Australia, that can currently legitimately use a ‘grassfed’ identity, is given access to grain as a production tool, through supplementation or paddock-based finishing systems.

At the other end, lotfeeders object to any reference to ‘grain’ in describing such production systems, for fear of compromising their valuable ‘Grainfed’ industry cipher.

Are there grounds for an additional industry descriptor for ‘grain supplemented’?

The problem with the current terminology issue was illustrated in this recent article on Beef Central, showcasing the magnificent paddock-based grassfed production system developed by Ceres Agriculture in northern NSW, which also relies on grain-based supplementation using self-feeders in the paddock. Ceres turns over more than 80,000 head of cattle in a typical year, making it one of the biggest beef producers in the state. 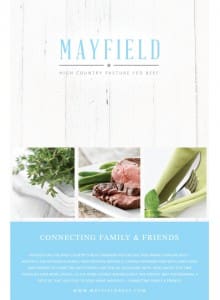 There is no denying the quality of the product being delivered under Ceres Ag’s systems, which is identified in Aldi Supermarkets under its Highland Park grassfed brand, and under Bindaree Beef’s Mayfield brand as ‘grassfed.’

In Ceres’s case, principal Mark Mason has been pushing for years through various industry channels for the formation of a third industry standard, for such cattle.

In a discussion with Beef Central, he displays clear frustration at the lack of progress.

“Ceres has been trying for years to do the right thing, but the industry has not allowed it,” a source close to the project told Beef Central.

For years terms like ‘grain assisted’ and ‘grain enhanced’ have been used as descriptors in saleyards industry parlance. A range of other possible terms have been floated: “Free-range grainfed” being just one. To our knowledge, however, such terms have never been seen at wholesale or retail meat trade level – only for livestock.

But one of the real challenges may be coming up with a terminology that everybody is happy with, from legitimate grainfeeders, to certified ‘nil grain’ grassfeeders.

“The reason why we give cattle in grass paddocks access to grain is to deliver consistent production, 365 days a year,” Ceres’s Mark Mason said.

“Our offshore customers want us to use a descriptor that includes the word, ‘grain’, but we can’t use that either,” he said.

“At the end of the day, we feel product like ours has the benefits of both systems – grain and grass. We developed this system in the 2000s, because of the impact of drought – not to try to deceive anybody.”

“But I’m finding it difficult to get any straight answers from anyone in terms of trying to develop a cipher of industry descriptor that reflects the sort of product we – and large numbers of other Australian cattle producers – generate.”

“We’ve virtually given up on getting some sort of industry standard or recognition – hence why we have now gone out and are developing our own standard with Aldi. We’d like AusMeat to audit the process.”

Mr Mason said he had not put in a submission for the current AusMeat industry language review, but had spoken to everybody from “Agriculture Minister Barnaby Joyce down.”

“We’re certainly not anti lotfeeding cattle – we’ve built a 5000-head feedlot ourselves – and we are certainly not anti grassfed. Whatever system can produce consistent high quality beef is what it’s about. We think there’s a place for all three production systems, and the industry should recognise that.”

In yesterday’s article published by the Sydney Morning Herald, it claims Aldi shoppers are being charged 30 percent more for prize-winning “grassfed” beef cuts, but suggests the claim is potentially misleading and the medals should never have been awarded.

The fast-growing supermarket chain had admitted that its Highland Park-branded grassfed beef products were from cattle given supplementary feed with grain, the SMH claimed.

Under local and international best practice standards, grassfed cattle must never consume grain or grain by-products. Further, they can only graze on cereal crops at the pre-grain stage.

While Aldi’s products are not grass-fed-certified under the Pasturefed Cattle Assurance System, it has entered representative cuts into branded beef competitions, including the prestigious Sydney and Brisbane Royal Shows, that clearly stipulate cattle described as grassfed must never have eat grain, the SMH suggested.

Grassfed cattle farmer Ian McCamley, from Central Queensland, said Aldi’s claim had the potential to mislead customers and hurt genuine grassfed producers. He is one of 290 Pasturefed Cattle Assurance System-certified producers in Australia.

“If it makes the grassfed claim, the cattle should never be fed grain. If they have been, I’m dead against that. It’s not fair on the consumer,” he said.

“Products making grassfed claims need to be genuine and back with a system of integrity. If not then it just tarnishes the grassfed claim.”

Aldi has adorned the packaging of its Highland Park grassfed porterhouse, scotch fillet and eye fillet with show medal logos from the Sydney Royal and Royal Queensland Food and Wine Show. The logos can significantly boost sales and revenue.

Tim Slack-Smith, Sydney Royal’s chief steward for the branded beef competition, told the SMH that a grassfed producer could submit a cut only if the cattle had been fed 100 percent on grass.

“Should an entry be found to have grainfed in a grass class, then they would be penalised … if it was to go through all the way and receive an award and then found to not be to schedule, then the exhibitor would be stripped of their award,” he said.

The Royal Queensland show’s guidelines state the entry must adhere to PCAS principles. Aldi signed a statutory declaration stating it was obeying the guidelines, the SMH suggested.

Beef cattle committee chairman for Brisbane’s Royal National Association, Gary Noller, said if an exhibitor intentionally made a false statement, there could be legal ramifications and consequences under the RNA by-laws.

“If a written complaint is made, then it will be dealt with in accordance with the RNA by-laws,” he said.

The SMH article said Aldi had told customers on Facebook that grassfed cattle could be given grain to ensure their welfare when weather conditions are bad.

“Aldi is fully compliant with all current legal requirements for food labelling,” a spokesman said.

“‘Grassfed’ does not imply that animals are 100 per cent grassfed with no grains at all in the diet. As we have publicly shared, we allow grain supplements when weather necessitates, for the animal’s welfare.”

“Customers are paying a premium for grassfed. We need to give them that guarantee. That’s why they should look out for products with the PCAS logo, meaning its underpinned by a robust system.”

Consumer advocacy group Choice said there is a plethora of confusing claims on beef packaging, such as pasture-fed, bio-dynamic, free-range, and organic.

“These claims tend to carry a premium price tag, so you want to make sure they’re worth the extra money,” said Choice’s Tom Godfrey.