FORMER Australian ambassador to China Geoff Raby has offered concerned farmers some relief but also cause for concern before the launch of his first book in Victoria’s south-west city of Hamilton.

The “realist” former diplomat and economist was in the self-styled Wool Capital of the World to do a Western District launch of ‘China’s Grand Strategy and Australia’s Future in the New Global Order,’ a critique on Australian-Chinese relations and where to go from here. 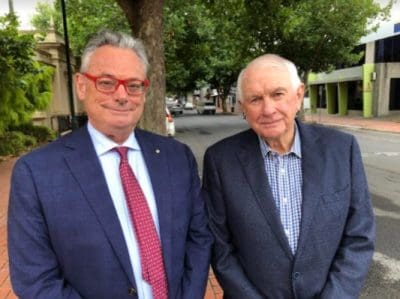 Dr Raby was Australia’s ambassador to China from 2007-11, ambassador to APEC from 2003-05 and ambassador to The World Trade Organisation 1998-01. He was awarded the Order of Australia in 2019 for services to Australia – China relations and international trade.

He told his Hamilton audience that the recent exchanges between Australian Liberal and Labor politicians criticising each other’s position on China as “badges of honour” would make it harder for Australia to find its way back to a normal relationship with the Communist power.

“I think it is disturbing that both sides of politics think so little about Australia’s national interests.

“The narrowness of the debate and the short-term political gain it is directed at, really is deeply, deeply disturbing.”

Despite the fact that China maintains tariffs and other trade actions against Australian barley, wine, beef, lamb, seafood and coal, Dr Raby said some in Canberra still believed that the current state of the Australian-China relationship is “excellent”.

“There are people who think this is how it should be and when I talk about improving the relationship they say ‘he is an old fuddy duddy, he’s from the past, the way we are now is the way we should be’.

“In ideological terms, they see China as a fundamental threat to the Western value system that has to be resisted at every turn and some of them boast about how Australia is leading in that.

“I have no idea as a realist why we would want to lead in that at all,” he said. “I would like, as a realist, for us to be working out what is in our interests and try to advance those interests.”

Dr Raby said despite the state of the Australia-China relationship he did not believe China would impose more economic restrictions on Australian commodities.

“They’ve done what they’ve done and I think their assessment would be that it hasn’t been very successful.

“It has tended to be counter-productive, other nations have tended to side with Australia and so I think you see across the board China stepping back from what we call, wolf warrior diplomacy.

“I think they would like to be in a position where they could ‘kill us with kindness’, but because of what’s going on as you say, it’s not possible for them to start to try a reset,” he said.

He agreed that it was probable the Prime Minister and Opposition leader also had the view that China would not expand its trade measures.

Dr Raby said Australia’s World Trade Organisation actions against China over wine and barley would have to play out before the country would attempt a reset in its relationship with Australia.

“There is nothing with the individual policy issues that the Federal Government is trying to prosecute, it’s how they’ve gone about it, the lack of diplomacy, the willingness, as we have seen in the last week, to weaponise foreign policy, to be confrontational, to even brag how much we are sticking it to China as a badge of honour,” he said.

“That’s not how you conduct the nation’s affairs with diplomacy and big problem is we don’t fully recognise that it is an asymmetrical relationship, we actually do need China more than they need us, and we need to understand that and adopt creative diplomacy.”

Dr Raby said Australia should be protecting its liberal values, by standing up and arguing for them, and need not kowtow to China.

Dr Raby cited incidents like Australia’s constant statements on the potential for war in Taiwan, Mr Morrison’s call for a World Health Organisation investigation into the potential source of the coronavirus outbreak in Wuhan, as examples of how Australia had confronted China in a way “we didn’t need to.”

“We had a steady build-up over a period of time of, if you like, diplomatic sleights, we gave to China publicly.

“Malcolm Turnbull, when he introduced the anti foreign interference law, which is supposed to fight all countries equally, spoke in Chinese and said ‘we have stood up’,” he said.

“That means one thing and one thing only, it’s only about China and that’s how Beijing read it and interpreted it.”

Other like-minded democracies – the US, Canada, New Zealand, the United Kingdom and some European countries — had managed to maintain normal trading and diplomatic relationships with China, while Australia has had no official contacts with China since 2016, he said.

“China’s not behaving well …. but that is the nature of the world we live in. Maybe we could get a bit smarter in how we do things and maybe we could let diplomacy play a bigger role, but we have marginalised diplomacy in this country. We have made ourselves an outlier,” he said.

On the question of what could normalise the relationship with China, Dr Raby said Australia had to first get through the next Federal Election.

“We have to get back to a period where every week, we don’t have the Government demonising China and we have to get much more discipline in government and public commentary.

“And hopefully you will have a quieter period and there may be some possibility of diplomatic outreach,” he said.

Dr Raby later said the problem for Australia is that it is a premium priced market, especially for meat products and wool, and is set to become a developed country within five years.

“I don’t think we are going to have more measures, I think things are where they are and the relationship is as bad as it is, it doesn’t have any further to fall.

“But I have said that before and been proved wrong,” he said.

The current government seems to have great capacity to confound me very time I say, well, how can it get worse?

Dr Raby said China might have thought, up until last week, that a change of government might provide a space for a reset.

“But they would never just reset if the (Australian) government changed, they will take quite some time to be convinced.”

Dr Raby later said he did not expect Australia to initiate a reset in its relationship with China, but thought this was more likely to occur if the United States changed its stance on China.

Hamilton district wool grower and manufacturer Peter Small said China and Australia’s wool trade business was a perfect example of interdependence. He said it was in the best interests of China to keep buying Australian wool, because they needed it for their textile industry.

“I think the wool industry is probably safest, because there are no other options for China for quality wool.”

But he believed Australia was now “so locked in into the US” that it would be impossible for the Australian Government to change its stance on China without the US changing its position also.

“We need to do what we can do in our national interests, but not use our valuable energy in trying to achieve things we have no way of influencing.”

He said China – as the world’s major wool processing country – and Australia as the leading Merino wool producer — were interdependent, which created an opportunity for Australian growers.