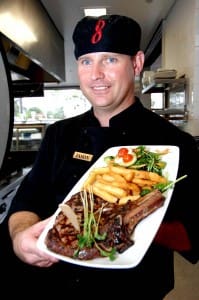 Beef continues to dominate volume and value share in the food service sector, but cuts selection is changing

THE latest annual survey of meat protein use within the Australian food service sector shows that beef continues to hold a dominant position, but there are some changes occurring in cuts preferences and other attributes.

Beef continues to hold a dominant position in the broader food service sector, according to the latest survey conducted late last year on Meat & Livestock Australia’s behalf by BIS FoodService.

In 2013, beef held a 30 percent value share of the fresh and frozen Australian food service market. That was worth $1.75 billion, in a market with total value of $5.8 billion.

Readers should note that the balance of data discussed below does not include the quick-service restaurant segment, because it tends to skew the results too much towards beef.

Breaking the domestic food service sector down by segment, measured by volume, beef performed best in pubs (44pc volume share), hotels/motels (42pc) and function catering (41pc), with its lowest performance in restaurants (29pc), where seafood (23pc) and lamb (23pc) were relatively strong. Poultry was particularly strong in the café segment (36pc by volume), where beef occupied a 39pc share. 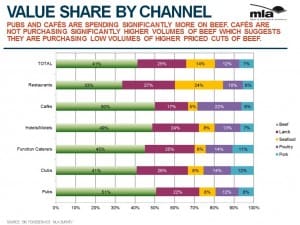 Click on image for a larger view of this chart

Pork was relatively lightly used across the food service sector spectrum, ranging from 14pc in clubs to just 7pc in restaurants and cafes.

Making the same comparisons by value, rather than volume, beef’s share is much larger, in most segments. Pubs were highest where beef represented 51pc of all animal proteins offered; followed by cafes (50pc), hotels/motels (49pc) and function catering 45pc).

The survey showed some big shifts in cuts use since the previous survey in 2012, when measured across all food service users except quick-service restaurants.

In a reflection of the cautious consumer spending patterns that have been widely seen in the past few years, mince has gone past tenderloin/eye fillet as the most widely-used beef cut.

The other, very considerable factor is the way that the ‘contemporary image’ of mince has changed, via premium and gourmet burger offerings in food service.

Two years ago, tenderloins had the highest penetration for beef cuts at 41pc, but they have nevertheless risen further to be present in 58pc of outlets in the latest survey, not far behind mince.

Rising even further in terms of penetration, however, has been rib eye/scotch fillet, which has gone from 38pc penetration in 2012 (second most popular) to 58pc in the latest analysis.

Grilling cuts continue to occupy four of the top five positions, gauged by market penetration, with striploin (third in 2012 at 37pc) rising to 47pc this time (fourth position). Rump followed next, rising from 32pc to 45pc in the latest survey.

Silverside/topside was the first of the non-grilling cuts to feature, rising from 19pc to 32pc in the latest survey, followed by T-bone, up from 21pc to 25pc.

Even secondary cuts like chuck roll (penetration growth from 6pc to 10pc) and brisket (8pc to 14pc) have grown, as speciality food service areas like Korean barbecue and Mexican restaurants and cafes have grown in popularity.

Significantly, all categories of beef cuts (22 items listed) enjoyed greater penetration in the latest survey, compared with 2012 figures. High drought-forced cattle turnoff, producing an abundance of supply and consequent lower beef prices relative to some other proteins, may have been a contributing factor.

In contrast, some lamb cuts lost ground this time, compared with the same survey two years ago, probably due to price. Notable examples were legs, down from 35pc to 31pc market penetration; loin chops and forequarter meat.