FAVOURABLE exchange rate movements during January have so far failed to stimulate any real change in price or demand for Australian lean grinding meat entering the United States.

The A$ has fallen about US3c on rates seen late last year, but imported beef prices have changed little since December. 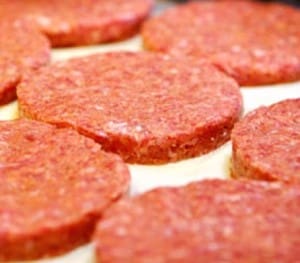 Meat & Livestock Australia yesterday quoted frozen Australian 90CL beef at 559.9c/kg, up 8c on the previous week, but still 95c/kg lower than where it sat this time last year. In US$ terms, this week’s figure was US176.8c/lb, slightly lower than the week before, but 37 percent lower year-on-year.

As reported in last week’s item on monthly export results, there was a huge spike in Australian beef exports to the US in December, due to the impact of the 2015 quota issue. December monthly exports reached almost 40,000t, 27,000t higher than November. Given the shipping time involved, the spike was due entirely to the ability to log December beef exports against the new 2016 US beef quota year.

Offerings out of Australia last week remained limited, as demand in other markets remains strong and slaughter has yet to pick up after the Christmas/New Year holiday plant closures.

“A favourable exchange rate has been supportive of trade so far, but market participants also view other bearish indicators in the market and remain wary of another financial crisis in Asia that could have a very significant negative impact on beef demand,” Steiner Consulting wrote in its weekly imported beef market report issued yesterday.

Imported beef prices were mostly steady to higher this week on limited offers from Australia and still good quantities of lean and extra lean beef trading out of New Zealand.

“Market participants indicated that demand for both lean and fat grinding beef is good and this has helped clean up supplies in the spot market,” Steiner said.

“Memories of the dramatic price collapse are still quite fresh for many, and no one wants to once again be caught in the same situation”

However, there continued to be a lot of lingering uncertainty about market direction in the short to medium term. This has impacted the ability and/or willingness of importers and end-users to take forward positions.

“Memories of the dramatic price collapse are still quite fresh for many, and no one wants to once again be caught in the same situation,” Steiner said.

Adding to the uncertainty is the sharp correction in crude oil prices, which some see as a barometer for macro conditions globally. For now, US market participants appear content to try and book product for short time-periods.

“Some of the market participants we contacted wanted to see how prices develop in February, once the rush of January retail ads subside,” Steiner said.

“Prices for pork and chicken remain extremely competitive at this point and this could limit demand for ground beef in the very near term. The concern among market participants is that if domestic prices weaken once again, it will limit demand for imported beef and lead to product backing-up in warehouses, similar to last fall.”

“However, those holding a more bullish view of the market pointed out that we are in a different point in the calendar. Improving grinding beef demand in the spring and still relatively tight domestic cow numbers should help support domestic lean grinding beef prices. Still, it appears that for the next few weeks US domestic end-users will continue to stay short-bought, focusing on immediate needs and limiting their forward purchases.”

Based on observations, Steiner suggested that the flow of imported beef into the US from Australia had slowed down considerably over the holiday period.

“Very current spot supplies and limited shipments from Australia will likely cause the spread between domestic and imported beef in the spring to be tighter than it was a year ago,” it said.

“As was the case last year, NZ bull slaughter has been front-loaded this year, with slaughter running heavier than normal earlier in the year. Normally bull slaughter peaks in January and then declines sharply in February and March,” Steiner said.

“Because slaughter through mid-December was running about 21pc higher than the previous year, we expect the drop-off in NZ slaughter to be even more significant this year than it was last year. The data made publicly available is somewhat dated but we expect NZ bull slaughter at this time is running around 28,000 head per week.

So far this year, US cow slaughter is running close to year-ago levels. Bull and cow slaughter for week ending January 16 was estimated at 120,000 head, about the same as what it was last year.

US cow slaughter normally moves lower into the spring as pasture conditions improve and the calving season comes to an end. Current forecasts are for cow slaughter to be steady to slightly above year-ago levels through April, but then run above year-ago levels for the summer months. “Still, the supply increases are expected to be in the low single digits as cow-calf operator returns remain quite strong,” Steiner said.

Fed cattle supplies are expected to slowly increase but at this point futures markets are pricing much lower prices than what supply fundamentals imply.

USDA this week once again revised lower its forecasts for US beef supplies and availability in 2016.

In its December report, USDA lowered its production forecast by 0.7pc. In January, that prediction was lowered another 0.3pc (34,000t). The lower production forecast combined with higher exports and lower imports implies that overall US beef availability in 2016 will be about 102,000t or 1pc lower than earlier forecast.

In December, availability was also revised 0.9pc lower. Thus, in the last two months USDA has made some very significant downward revisions to supply projections for 2016, and yet US futures markets continue to hold a very bearish view of fed cattle prices, especially for the second half of 2016.

October 2016 fed cattle futures are currently priced at around $121/ cwt. In early November 2015 this futures contract was trading around $132/cwt.

“To be sure, beef supplies are expected to increase in 2016, with USDA currently projecting domestic beef availability to be up 1.4pc compared to the previous year. But it appears to us that futures at this time are not just pricing the impact of higher beef supplies. Rather, they also appear to be pricing the impact of much lower meat protein prices, sharply lower commodity prices and the potential for a dramatic global slowdown that could disproportionately impact beef prices.” Steiner said.

“The USDA downward revision of beef supplies recognise that while production will start to increase, this is not going to happen as fast as some may have initially thought or hoped,” it said.