The challenge facing Australia’s beef marketing team in Middle East and Northern Africa (MENA) in the next 12 months is to consolidate the sales volumes achieved in the region since Brazil was excluded from the market over a reported BSE detection early last year.

The MENA region represents a one million tonne per year beef import market. 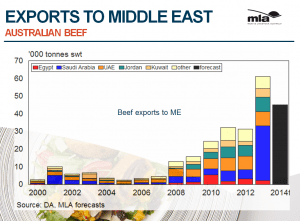 Annual Australian beef exports to the Middle East. Click on image below article to view in larger format. Source: MLA

Indian buffalo meat is the dominant source of bovine protein in the market, accounting for sales of about 500,000t per year, followed by Brazil with exports of around 350,000t to the market.

However, since Brazil’s early 2013 suspension from a number of key markets in the region, and in particular the large Saudi Arabian market, Australian exports have risen to fill the gap.

Then in 2013 exports more than doubled to over 60,000t following Brazil’s suspension, which followed a delayed report of an atypical BSE case in a Brazilian cow that did not enter the food chain.

With expectations high that Brazil will be granted re-entry at some point in the near future, the challenge facing Australia’s beef marketing team in the region is to consolidate the substantial growth Australian beef has enjoyed in Brazil’s absence.

The MENA region is a large and fast growing market and one that has room for many suppliers. The raw figures alone tell the story of the MENA region’s remarkable growth, as Meat & Livestock Australia’s MENA region manager Jamie Ferguson told MLA producer forums in Southern Queensland and New South Wales this week.

450 million people live in 46 countries throughout the region. Several are net oil exporters. The leading markets in the region are home to a diverse range of nationalities with a very young age profile. The average age in Saudi Arabia for example is just 30 years.

The United Arab Emirates has been the poster child of the region’s recent growth, where the population has exploded from 3 million just 10 years ago to 8.5m today. Dubai alone now has more than 500 hotels and plans to build another 80 before the World Expo comes to the UAE in 2020. Its airport, now a major hub, is also expected to overtake Heathrow as the world’s busiest this year.

The consistent eating quality offered by Australian grainfed beef in a market where US product is also still unable to compete due to a BSE detection 11 years ago is another key point of difference leveraged by Australian marketing efforts.

Mr Ferguson said MLA employed a range of initiatives to promote the quality, consistency and safety attributes of Australian beef in MENA, including
Australian-branded labeling and product sampling at point of sale in supermarkets, regular work including culinary schools with new and established chefs, and through a strong presence at the major trade shows such as Gulf Foods, the largest annual trade show in the world. 26 Australian exporters had representation on MLA’s stand during last year’s event.

One of MLA’s most successful strategies in the region has involved its partnership with Egyptian television celebrity chef Tarek Ibrahim, the first Arab chef to received the coveted status of Master Chef from the World Association of Chef Societies.

For several years Mr Ibrahim has been employed by MLA as its corporate executive chef for the MENA region, and in that role he has helped to promote Australian red meat products directly to millions of consumers throughout the region on a regular basis via his work on televised cooking shows.

Mr Ferguson said with more than 80pc of the population in countries like Saudi and the UAE possessing smart phones, awareness campaigns and competitions via social media also played a cost-effective role in MLA’s marketing efforts in the region.

Grainfed product accounted for 19pc of Australia’s beef exports to the region, last year, up from 16pc the previous year, reflecting the growing consumer awareness for the consistent eating quality provided by grainfed beef.

Mr Ferguson said that while Australian product would inevitably lose some market share on price when cheaper Brazilian product is permitted back into the market, MLA would continue to reinforce the eating-quality attributes of Australian beef.

“Our job is to keep meat on menus, and to retain that loyalty of consumers who have tried our product and really liked it.”