India has returned to become the global leader for bovine meat (beef and buffalo meat/carabeef) exports by volume in 2016, according to Meat & Livestock Australia.

Australia was the largest beef exporter in 2015, amid a year of near record production (just shy of the 2014 peak), and strong global demand.

However, shipments have since declined following the departure from drought and early signs of a herd rebuild.

The figure below illustrates beef exports of the four major players during the first nine months of 2016. At a time when Australian exports have been constrained by supplies, US beef exports have increased on the back of quickly growing production, while Brazil has expanded exports following regained market access to China and Saudi Arabia. 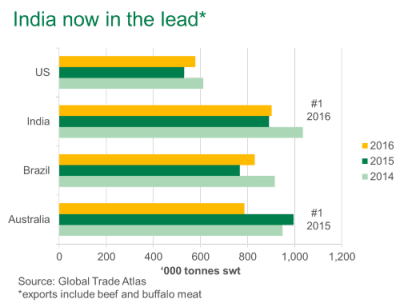 Indian export growth has been underpinned by a 31pc increase in shipments to Vietnam – the supplier’s single largest market, receiving just shy of 400,000 tonnes swt during the January to September period.

As illustrated in the figure below, other major markets for Indian buffalo have recorded mixed results so far this year.

Exports to Egypt have increased 12% year-on-year, to 107,000 tonnes swt between January and September, while shipments to Malaysia have declined 10%, to 96,000 tonnes swt. 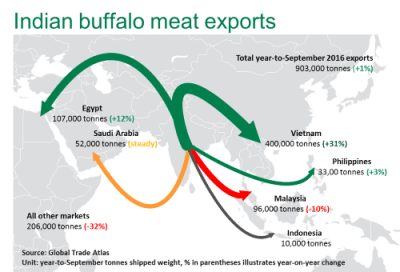 One major development has been the 9,864 tonnes swt (across August and September) exported to Indonesia, with the Indonesian government subsequently issuing permits to import additional Indian buffalo meat in coming months.

Indian buffalo is very price competitive on the global stage, being the cheapest large supplier of frozen commodity beef.