Imported lean grinding beef prices in the US continued their rapid descent last week, measured in both US and Aussie dollar terms.

The indicative imported 90CL cow beef price was US192.5¢/lb CIF on Thursday, down 9¢/lb on the previous week. It’s almost exactly 12 months since the market has been below US200c/lb, market watchers say. Last week’s prices were down about US80c on this time last year, although the plus-side this year is an A$ around US70c, compared with mid-to-high 80s this time last year. 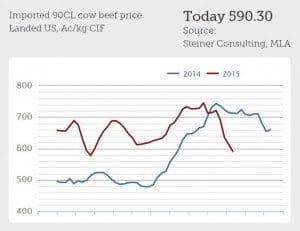 In A$ terms, the 90CL blended cow price decreased A23.8¢/kg last week, to A590.3¢/kg CIF. As can be seen in the image of Beef Central’s home-page graph published here, that’s the lowest level since a brief ‘blip’ in the market in March, but more regularly since July last year.

There are several influences for the rapid declines being talked about among export traders, including earlier buying activity because of what was thought would be an emerging shortage due to quotas; plenty of New Zealand meat on the water; a high cow kill in the US at present; and abundant stocks in cold storage.

Australian export traders spoken to yesterday felt that the recent market trend may be close to bottoming out, however.

“I’d expect we’d start to see a little bit of value at these sorts of levels,” one trader said.

“But I don’t think it’s likely to go nuts. Demand heading into winter in the US tends to get a little quieter. I think it will be reasonably quiet now through to the end of the year, perhaps with a few little ups and downs along the way.”

“It may extend even a touch beyond that. We’re starting to see US buyers only wanting to buy February delivery meat. A lot of users are already reasonably full for January.”

The decline in imported beef values continues to reflect both uncertainty about domestic lean beef prices in the very near-term, as well as expectations that supplies will be large in the next three months, pushing more lean beef into the US market, Thursday’s report said.

Steiner’s chart published below shows the dramatic decline in the price of imported beef from the peak seen last year. The graph shows the fourth quarter in each year shaded in orange, so readers can better see the seasonal tendency during this time.

“Keep in mind, however, that during those years supplies of imported beef were notably lower than what we are seeing currently,” Steiner said. “However, current market volatility is quite dramatic, and likely to trump the seasonal trends in the short term,” it suggested.

US market participants told Steiner last week that they are beginning to see some activity in the market, given the pull-back in prices.

“They also pointed out that speculation about a major spread between product delivering in 2015 and 2016 seems to be overstated. While there is a modest spread, it is not as big as feared. Some packers in NZ are close to filling their US quota for the year and Australian packers also have limited quota, given that only about 16,000 MT has yet to be shipped against 2015.”

However, inventories of imported beef are ample at this point. Markets will likely be well-supplied through the end of the year. At this point early Q2 appears to have more risk in terms of supply availability than early Q1 in our view,” Steiner said.

Australia/NZ slaughter higher in near term

There is a lot of speculation in the US as to what will happen with Australian slaughter in 2016, Steiner suggested. Slaughter in the last two weeks has been higher and it is expected to stay high at least through early December, barring rain.

For week ending October 23, slaughter in Australia’s Eastern States reached 167,102 head, the highest weekly slaughter since the last week of June and only 5pc lower than the near-record levels of a year ago.

“Seasonally, slaughter in NZ is higher in October and November, and we expect weekly slaughter by the end of next month to be a little over 50,000 head,” Steiner said.

One factor that could slow down the seasonal increase in NZ slaughter is the recovery in dairy prices, with recent auction prices significantly higher than in late June and July.

“Still, the expectation is for slaughter to remain heavy in the very near term. Uruguayan slaughter also remains above year ago levels. Cow slaughter there in the last six reported weeks is up 22pc from a year ago.”

“We expect this week slaughter to be 110,000 head and then move to around 120,000 head by mid-November. The seasonal increase in slaughter should bring more lean beef to market and normally the seasonal bottom in prices for domestic lean grinding beef does not happen until late November,” Steiner said.

“In the very near term, the larger US slaughter will tend to pressure prices in the US domestic market and limit demand for imported beef.”