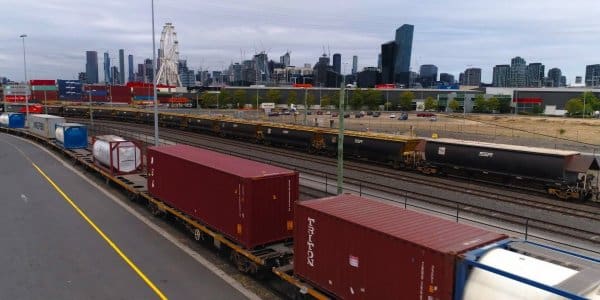 THE SLOWDOWN of China’s supply chain caused by COVID-19 is making its presence felt among Australian agricultural exporters who are scrambling to get enough containers to pack for their global customers.

The backlog in China is having its biggest impact on 20-foot refrigerated containers, or reefers, which are sitting on moored or idling vessels, and at container terminals waiting to be delivered to wholesalers or end users.

Australian beef, grapes and wheat are among the commodities caught in the hold-up as ports inch towards a return to full operation following government-imposed lockdowns in China which are continuing in some areas.

The impact of COVID-19 on logistics has been exacerbated by the spread of the virus accelerating during Chinese New Year.

Apart from quarantining logistics many workers holidaying with their families in inland provinces and away from the cabins of their trucks, cranes and forklifts, it has extended blank sailings from the normal three weeks encountered over Chinese New Year to six weeks and counting.

“We are having trouble getting containers,” Mr Dubey said.

“Some of the vessels we could normally expect have been cancelled.”

Wimpak general manager James French echoed Mr Dubey’s sentiments, and said on top of the impact COVID-19 was having on currency movements, the shortage of 20-footers was making the direction of trading and logistics difficult to predict.

“The main issue of coronavirus is no imports from China, so we’re not getting back the empty containers,” Mr French said.

Wimpak is a major packer and exporter pulses in Victoria’s Wimmera region, and Mr French said the business was “just scraping through” on available containers.

“We’ve had shipping lines not take on any more bookings, so that is going to hold us up.”

“You’ve got to be tentative in what you book when it comes to new business.”

Mitigating the impact of COVID-19 on Australian containerised exports is the relatively small amount of canola, chickpeas and cotton being shipped as a result of the eastern Australian drought.

Along with barley, canola, lentils and wheat, these commodities normally feature heavily in Australia’s dry-cargo exports.

Drought in New South Wales and Queensland has reduced the volume of cotton, grain and pulse exports out of Brisbane and Sydney, and has concentrated the impact of the container shortage on Melbourne, Australia’s busiest container port, and Adelaide.

Anchor Logistics is a Melbourne freight broker and its director and principal Bob Brittles said around 70 per cent of China’s logistics workforce might now be back at work, but COVID-19’s impact on container movements was likely to be felt for months.

“Because of what’s happening in China, the shipping lines have come out with a series of charges, and that might be a peak-season charge for dry cargo of US$50 per container, and up to $1250 for reefers,” Mr Brittles said.

“It all has an effect on Australian trade, and we’re seeing more blank sailings through March and into April.

“If you want to book containers to north Asia in April, you’d be lucky to get something.

“It means there are no imports coming in, and people might be looking at three sailings instead of six to do their export shipping.

“All through the supply chain, there’s quite a deal of stress.”

Mr Brittles said shipping schedules between Australia’s east and west coast and Southeast Asia were not as badly affected by the container shortage and port backlogs.

“It’s east-coast services to China and north Asia that have been worst affected.”

Mr Brittles said continued blank sailings were being seen because shipping companies were opting to idle their vessels in north Asian waters.

“They are idling because of congestion at the terminals, and they are waiting for resumption of normality.”

Latest advice from Australia’s Freight & Trade Alliance (FTA) says an improvement in bookings and vessel loads has been noted, and a return to full sailing schedules, and 90-95pc load capacity by late March or early April was likely.

It has also reported trucking capacity in China’s northern and southern ports being back at full capacity.

“Vessels that have been offline have been used as storage depots for reefers due to the reefer- plug shortage at Chinese ports,” FTA said.

However, a lack of container movements during the blank sailing period may impact exports, especially of fresh produce.

Mr Brittles said availability of containers for exports from Australia should start to improve after Easter, but the lag effect could delay a return to normal for Australia-China shipping until May or June.

“There are developing issues in other major economies that may disrupt normal shipping movements worldwide, and that has yet to play out.”

“For the past three months, every shipping line in the world has had its cashflow disrupted.

“It’s affecting stevedores, trucks, and any business that’s not getting weekly sailings.

“It could flow on to September or October.”

In a statement, Container Transport Alliance Australia (CTAA) director Neil Chambers said  the container shortage was having a worrying cash-flow impact on container-transport operators Australia-wide, with some having expensive transport equipment laying idle and laying off or standing down labour.

He said evidence had also emerged of freight forwarders and shippers postponing or delaying invoice payments to transport operators.

“This is heightening the current precarious cash-flow situation for many transporters.”

CTAA is lobbying Australia’s major container-stevedoring companies and Containerchain, the agent for the collection of notification fees, to seek an extension of payment terms to help soften the impact of COVID-19.

“CTAA has also urged the empty container depots and the stevedores not to be too quick to pull the trigger on access cancellation if transport operators are under genuine financial distress during these current dire container trade circumstances.”

Mr Chambers said if stakeholders in the Australian container-logistics industry do not pull together during this current crisis, the landside container transport landscape will be severely impacted, and long-term participants could be forced to exit the sector.

“Imports are in decline due to a lack of supply from China and this is starting to be felt by consumers,” VTA CEO Peter Anderson said in a statement.

“Even though a product might not be manufactured or assembled in China, delays are being caused by components made in China not being as readily available.

“We should all get used to waiting longer for manufactured goods or seek alternatives in the short term.”

Mr Anderson said exports from Australia were also being impacted because Chinese factories and industry were not operating at full capacity, and had limited need for some raw materials from Australia.

“This is creating insecurity among Australian exporters who can no longer be certain about their trade volumes with China.

“There are consequences for transport operators at every mode and level of the supply chain, because the overall import-export freight task will decline until Chinese factories and industry resume operating at normal capacity.

“The pressures on local businesses will increase as volumes diminish.”