Brazilian beef: All the advantages, but none the luckier

Eric J. Brooks, eFeedLink, 08/07/2015
Even with rival exporters flat on their back, competitors banned from a large market and its currency falling, Brazil’s beef sector just can’t get a lucky break, writes Eric J. Brooks in this cross-posting from Singapore based agriculture news service eFeedLink. Both on the domestic and trade fronts, it is turning into a disappointing year for Brazil’s beef sector.

With US and Australian cattle numbers half a decade away from recovering and India supplying the market’s lower end, amid East Asian beef demand booming, Brazil is the only mid to upmarket beef supplier capable of expanding output rapidly. Moreover, with US, EU, Australian and New Zealand beef all banned from Russia, Brazil is better placed than either Argentina or Paraguay to take advantage of the situation. 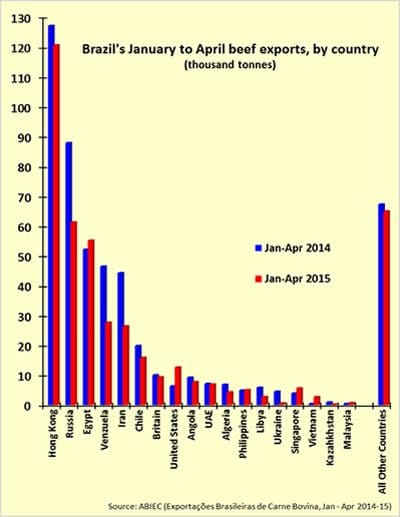 Over the longer term, with its nearly limitless reserves of untapped arable land and water, Brazil is the only country capable of expanding its feed supplies by an amount sufficient to meet all foreseeable export demand. It is for this reason that in late 2014, Rabobank projected Brazilian beef exports to rise at a 7% annual rate from now through to 2024.

Furthermore, since 2012, Brazil’s currency has fallen by over 40% against the US dollar and a third against the Australian and Canadian dollars, thereby giving its beef a cost break versus its export competitors. With so much going for it, the USDA forecasted 2015 exports to rise by 5%, from 2014’s 1.91 million tonnes to 2.01 million tonnes this year, after increasing 3.2%, from 1.85 million tonnes in 2013. But increasingly, exports look likely to rise by less than 4% and stay under 2 million tonnes. How can Brazil defy such strong odds in its own favour?

A predictable, H2 2014 surge in exports of beef and pork to Russia was cut short by the ruble’s massive currency devaluation, which slashed that country’s capacity to import meat. The Eurasia Economic Commission, which collects statistics on former Soviet bloc states, reports that in 2014 Brazil exported 307,000 tonnes of beef to Russia, Belarus and Kazakhstan. While they may account for the largest chunk of exports (16.1%), these countries only purchased 0.9% more Brazilian beef by volume than the previous year.

Because beef is the most expensive of major meat lines, plunging Russian personal incomes also meant that they frequently substituted cheaper exports of Brazilian chicken to Russia (which doubled to 121,000 tonnes) and pork (which rose 44.2%, to 187,800 tonnes) in place of beef –and other ex-Soviet Union states could not counterbalance Russia’s downturn.

With Russian beef imports falling 275,000 tonnes, due to their smaller populations, combined Belarus and Kazakh beef imports increased by approximately 5,000 tonnes over the same two years. Hence, market share gains made at the expense of US and EU exporters in Russia are being counterbalanced by a steep drop in Russian aggregate beef demand and the substitution of cheaper protein lines.

It must also be noted that the oil price crash which tanked Russia’s economy also impacted the beef consumption of other oil producing states. This in turn led to falling beef export volumes falling in in a wide number of oil producing countries including Iran, Iraq, Venezuela, Angola, the UAE and Libya.

Even so, by the second quarter of this year, Russia was recovering from its late year economic crisis faster than expected, which is why one reason the USDA still projected a 5% increase in 2015 beef exports.

Unfortunately for Brazil, in early June, Rosselkhoznadzor, the Russian veterinary authority determined that red meat supplied by three leading Brazilian exporters including JBS, Marfrig and Frigol contained excessive levels of antibiotics, E. Coli and Listeria bacteria. It immediately limited the quantity of beef these companies could export to Russia. It also announced that two meat plants owned by JBS, three of Marfrig’s plants and three plants from smaller suppliers were completely banned from exporting beef to Russia.

The Brazilian beef sector’s initial response to these non-tariff barriers was sanguine and confident. ABIEC, Brazil’s beef exporter association noted that with their large network of slaughtering and processing facilities, large suppliers could divert cattle to meat processing plants not affected by Rosselkhoznadzor’s ban.

In retrospect, Russia must have overheard ABIEC president Antonio Camardelli bragging to a Reuters reporter that, “There is no commercial problem of any kind… If I can’t export here, I’ll export from there. Our capacity is very large.” –Ten days later, in the second week of June, Russia imposed similar beef export controls on BRF (a.k.a. Brasil Foods) and nine other meat exporters.

It also banned meat from several other plants while stepping up laboratory-based meat inspections on all other suppliers. The intensified inspections are clearly designed to slow down rate at which even allowed beef enters Russia, and could be used to create additional excuses to further restrict beef imports. Needless to say, with Russia accounting for a significant portion of Brazilian beef exports, this will have a chilling impact on its 2015 trade performance. These measures took the industry by surprise. Francisco Jardim, Brazil’s agricultural protection secretary claimed that there with no scientific basis for these bans, they “Reinforce the feeling that there are other motives for the Russian decision, beyond technical factors.” 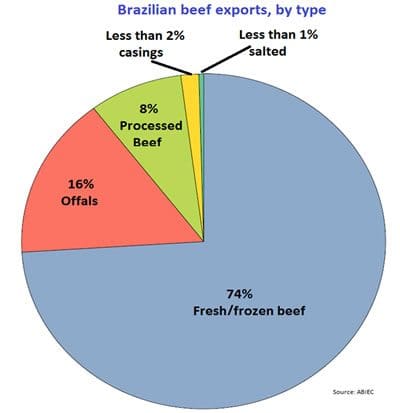 The veterinary commission’s excuse for antibiotic and bacterial contamination notwithstanding, the real reason for these export restrictions appears to be political. Eugen Gerden, a Russian industry analyst stated the real reason behind Russia’s new restrictions on Brazilian beef was connected to a new US$150 million program for encouraging domestic production in place of imports.

It is no coincidence that these restrictions on Brazilian beef exports were introduced just weeks after production subsidies were given to Russia cattle farms. According to Gerden, “imported channels will be gradually reduced, which will greatly contribute to the implementation of import substitution.” –In other words, Brazilian beef will face a succession of non-tariff barriers designed to, one way or another, block its entry into Russia. With Russia having become Brazilian beef’s largest, fastest growing export frontier, this is a long-term problem of sorts.

Granted, in other parts of the world, Brazil’s export prospects are visibly brightening. China, which has become the second largest beef importer and is expected to overtake Japan as the top, recently abolished a three year ban on Brazilian beef.  Imposed in 2012 after a Brazilian cow came down with BSE, approximately 26 Brazilian plants had already been approved for export to China at the time of this article’s publication.

This however, will not impact the industry over the short term: Beef exports to China can only resume after a sanitary protocol is negotiated and this is still at least several months away. Hence, China’s demand for red meat will only materially augment Brazil’s beef trade performance from 2016 onwards.

China’s import liberalization follows that of Iraq and South Africa, which also recently allowed Brazilian beef into their country following the 2012 BSE scare. Saudi Arabia and Japan are also expected to lift their BSE-induced bans on Brazilian beef exports later this year.

In Southeast Asia’s rapidly growing meat market, negotiations for market access to Thailand, Myanmar, Indonesia and Taiwan are expected to result in market access being gained into some of the above countries by the end of this year. It is hoped that during President Dilma Roussef’s late June visit to Washington, frozen beef exports to the US may also be approved.

With East Asia getting hungry for red meat and Brazil the only major producer with a large expansion capacity, Rabobank expects Brazil’s beef exports to increase at a 7% annual rate and double from a USDA estimated 1.85 million tonnes in 2014 to approximately 3.73 million tonnes in 2023.

The problem is that such measures will only benefit the industry years in the future. For now, January to April beef exports amounted to 429,800 tonnes, 15.3% less than the 507,000 tonnes exported in the first four months of 2014, as a trucker’s strike prevented shipments from reaching port even before Russia’s restrictions soured the yearly trade outlook. While the re-entry of its beef into fast growing Asian markets will lift second half exports, we expect it to fall short of its 2015 USDA forecast of 5% export growth.

At this time, the disappointing trade performance is compounded by poor beef demand at home. With economic conditions worsening for a third consecutive year, falling per capita consumption and population growth are balancing each other out, keeping consumption flat at 7.9 million tonnes for a third consecutive year. Here too, is an irony, as until the recent slowdown, Brazil’s economy –and meat consumption –ranked among the world’s fastest growing.