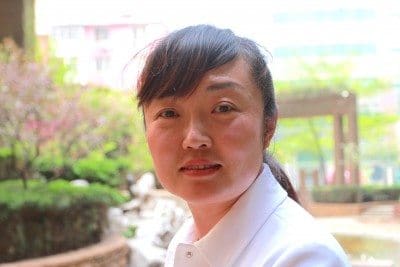 Australian beef is highly regarded in China for its natural qualities and healthy image, but despite that competitive advantage it is facing increasing competition in the lower priced, frozen beef commodity end of the market.

As recently as three years ago one of China’s largest beef importers, Goldrich International, imported 100pc of its frozen beef from Australia.

However, since that time the Chinese Government has opened its frozen beef market to more suppliers, most notably Brazil, and the impact on that end of the trade has been dramatic.

Managing director Grace Gao explained to Beef Central that the company is very proud to deal with Australia and believes Australian beef is the best quality beef available from any country.

However, Australian beef is more expensive, and in the frozen beef trade, Brazil has “nice volume, quality is good, and they can offer beef at a cheaper price”.

Depending on the cut, Ms Gao said Brazilian beef ranges from 10-20pc cheaper to 30pc cheaper for some special items.

With competition intensifying in the high volume, lower priced frozen beef commodity end of the market – which includes large volumes of cheap beef and Indian buffalo meat smuggled in via the illegal “grey trade” – the way forward for Australian beef into China clearly lies in supplying the higher-priced chilled beef market.

There is some talk that New Zealand may be closer to signing an agreement to supply chilled beef to China. It would have to go through an inspection process first and there has been no formal announcement to that effect yet.

Ms Gao told us that there is very big and growing demand for chilled beef in China.

“The habit for Chinese is not to buy frozen cuts, we like fresh meat,” she explained.

“Normally people will buy fresh meat from the (wet) market directly or from the supermarket, mentally they think frozen meat is not as good as fresh.

“Chinese people are educated to understand this, Australian beef is welcomed here.

“I think consumers would like to pay more for Australian beef, it is natural, it is healthy, it is from the natural grassland, this is the common knowledge of Australian beef.”

Asked if she would like to see more Australian plants approved to supply chilled beef to China, Ms Gao said: “of course, absolutely”.

“We do believe if there are more abattoirs of chilled beef approved by China it will help us to market beef in China.

“It is more competition. If more are approved the price will go down to help us.

“At the moment the price is quite expensive.”

Ms Gao said the rise in the Australian dollar in the past two months had made Australian beef about 5 percent more expensive.

Up to 300 containers per month 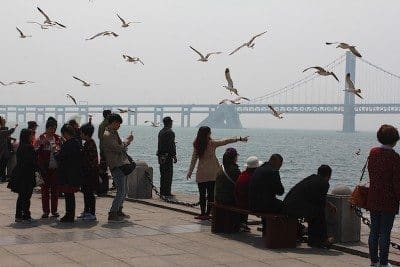 The picturesque peninsula city of Dalian is a popular destination for Chinese tourists.

Goldrich International is based in the attractive peninsula city of Dalian across the Yellow Sea from Beijing. It is a picturesque port city and popular tourist destination aptly known as “the pearl of north China”.

The company is owned by the Gao family, and headed by general manager Grace, the daughter of the company’s founders.

Goldrich International began importing lamb from New Zealand 17 years ago, and then expanded into importing beef by-products and then beef cuts from Australia.

Since that time China has approved imports from more countries. Australia remains the only country that can supply chilled beef at present, but importers such as Goldrich now have access to frozen beef from seven different countries: Australia, Brazil, Argentina, Uruguay, New Zealand, Canada, Costa Rica and Mongolia.

The majority of imported beef is grassfed. The strong competition for grainfed beef from other importing markets such as Japan and Korea meant that grainfed prices were often very high, Ms Gao said.

The beef imported by Goldrich is sold in northern China through three main channels:

Local abattoirs: Frozen quarter beef imported from Australia (Australia is also the only country approved to supply frozen quarter beef and/or full carcases) is sold to several large local slaughterhouses, which cannot get a stable supply of livestock due to China’s declining cattle numbers. The beef is processed into individual cuts for sale into Chinese markets or retail trade.

Wholesale market: Imported frozen beef cuts from all sources, the largest of the three channels.

Ms Gao said she buys several different cuts of beef. However, the long cuts such as rump, striploin and cube roll (rib-eye) were harder to import because of price, she explained: “They are the most difficult items for us to market here. The price gap from Australia compared with others is quite big as Australia has other better markets – the US, Europe – they could sell all of the striploin or cube roll there and get a better price. We hope we can buy because of quality, but the price, too expensive.”

Asked how she believed the pending growth of the live cattle import trade might affect beef supply and price in China, Ms Gao saw the trade as a positive.

“All of the abattoirs here in China would be happy to buy livestock directly from Australia, more than to buy the cuts or the carcase, as sometimes the technical boning plan is different, your cuts are different from what we want.

“This is also the reason why the cuts from other countries can’t get the same price from cattle slaughtered here by Chinese local abattoirs.”

“I think the promotion of Australia beef in China has been very good,” she said.

“They (MLA) held many functions, invited the importers, the local hotel chains, and some restaurant owners and chefs to teach them how to use the cuts.

“Sometimes, chefs in hotels didn’t know the cuts, how to use, cooking times, but after this kind of education they understand and can cook the new cuts, and they also see that it will sometimes save the costs of their restaurant owner.”

A common message for women in China from television, media and websites was that “if you are having beef you keep fit”.

Chinese consumers were aware that cattle were grown on natural grasslands, while the perception was that pork and chicken were often raised with additives or chemical materials and were grown very rapidly which concerned Chinese parents.

“Young parents wont like their babies to have KFC, with young chickens growing up very fast, less than 40 days,” she said.

“The parents would like their baby to have the red meat. The knowledge here is that red meat is better than white meat.

“Today pork is still the top one but the whole volume is not growing as fast as it is for beef and lamb.”

Ms Gao said the weakening economy in China was impacting on current import volumes, but she predicted that beef imports would continue to grow strongly in the long term, given the increasing preference of young Chinese consumers for western style diets.

“The younger generation here in China, some of them had the overseas study, and spent their early 20s overseas experiencing western style food,” she said.

“Even though they come back and return to this country, they still want to have the western style food, and this kind of demand is growing very fast now.

“This is not only for the children with overseas experience but also for the young children who stay here.”