Some of the Speckle Park F1 steers in lairage before slaughter.

As brought to Beef Central readers in this earlier story, Nolan Meats in January worked with Brisbane’s famous 1000-seat Breakfast Creek Hotel to showcase Blonde d’Aquitaine beef on the menu for a month.

Speckle Park cattle are still very much in development stage in Australia, so when the opportunity to buyer a large line of Speckle x Angus F1 feeder steers came up in December, Nolans saw another menu showcase opening.

This time, the processor is working with another of Brisbane’s large casual steak dining venues, the Bracken Ridge Tavern.

The steers bought by Nolans are some of the first progeny, on any real scale, to come out of that program. 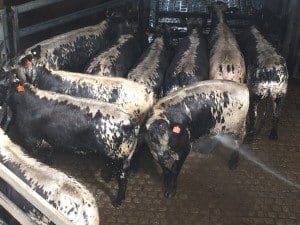 Speckle Park steers in the washdown bay prior to slaughter. Click on image for a larger view.

The steers were aged 13-15 months at purchase, averaging 322kg when inducted at the company’s Wide Bay feedlot. Given their light entry weights due to the season, they were fed for 116 days to produce high quality grainfed MSA cuts, packed under tight meat quality tolerances under the Nolans Private Selection brand.

The entire output of sweet cuts and other items will be fed into the Bracken Ridge Tavern program, where they are featuring as a well-publicised menu special.

“May has been all about beef in Queensland, and this opportunity is shaping up as a unique dining experience for Aussies wanting to try some Speckle Park beef,” Nolan Meats co-principal Terry Nolan said. “As a premium product it is creating a lot of interest for both consumers and beef producers.”

Speckle Park cattle have only been seen in Australia since 2007, but have quickly gained a reputation for high meat quality performance. Minnamurra F1 entries in the recent Beef Spectacular carcase competition in Wagga filled the first three placings in the carcase performance division, against almost 100 entries representing a wide spectrum of breeds.

Mr Nolan said he was impressed with the feeders’ performance in the feedyard, despite an extremely hot summer, with nil mortalities or health issues.

“This was a pretty special run of MSA cattle,” he said.

Carcases were tenderstretched and MSA-graded, with consistent marbling scores of 1-2 across the mob, despite their very young age. Fat cover averaged 7.4mm at the P8 site, while eye muscle areas averaged an acceptable 76sq cm. Meat colours all fell within Nolan’s tight 1b-2 range, with 97pc of the bodies grading in Nolan’s top MSA grouping.

“Dennis Power the manager at Minnamurra should be rightly proud of the genetic pool he is assembling,” he said.

The dominant coat colour gene carried by the Speckle Park-sired calves is clearly evident in the photos accompanying this article, which to the eye look more like purebred cattle than F1s.

“We’ve found the characteristic coat marking is remarkably dominant, ever in Angus crossbreds, where the black coat has the reputation for dominance. At least 90 percent of the calves carry the distinctive markings,” manager Dennis Power said.

Bracken Ridge’s Michael White said the uniqueness of the meat offer was special enough to treat the Brisbane public to a ‘boutique, short-term offering.’

“We have the added bonus of being able to build a real provenance story around it, given that the beef can be sourced back to one breeder, one grazing property and one feedlot,” he said.

“They’ve come through the same system, ensuring that each and every dining experience will be an absolute delight.”

Click here to find out more about the Bracken Ridge Tavern.