The campaign ad launched late yesterday, and features a satirical ‘Lambalytica’ algorithm which is designed to disrupt people’s mobile devices to bring them together face-to-face.

MLA said the integrated campaign utilises the ‘Share the Lamb’ brand platform and sets out to remind a tech-obsessed nation, distracted by their phones, screens and social media, to seek out real-life connections and unite over delicious Aussie Lamb.

From a couple who spend more time looking at their phones than each other, to a teenage gamer glued to the TV, ‘Lambalytica’ taps into the phones of unsuspecting Aussies and unites them over an epic Lamb barbie, MLA said.

The campaign continues MLA’s popular tradition of using humour in its lamb ads, but the launch on the last day of the Australia Day weekend, ostensibly to avoid clashing with media bushfire coverage, has met some industry criticism.

“MLA talked to us only in the few days prior to the campaign that it had been delayed and that they were concerned about the unfolding (bushfire) crises and releasing an ad campaign during a crises.

“We were advised last week that things were going to be delayed,” he said.

“We understand the reasoning behind it, but SPA feels that Australia Day and the lamb campaign go hand-in-hand and it’s essential that that continues.

“But on an ongoing basis, the summer campaign must start well before Australia Day so it always encompasses that,” Mr Crisp said.

“We think that it is vital on an ongoing basis.

“We need Australia Day and lamb to be associated together, so on a policy front that’s what we want to see every year,” he said.

“We see that as an essential link and Australians expect that, and why would you want to give up that fantastic association between Australia Day and lamb?”

The SPA would be talking with the retail sector about the campaign’s timing on lamb sales, he said.

“It’s something we have to know for future years because it has to be part of our and MLA’s decision making.”

When it was suggested that the decision to delay the ad’s media scheduling would have been made weeks ago, Mr Crisp said SPA was not involved in MLA’s operational decisions.

Mr Crisp did not believe that MLA’s plan to delay the launch of its usual mid-January pre-Australia Day campaign was made to avoid becoming embroiled in the Australia Day-Invasion Day debate.

“I absolutely sure it wouldn’t have had any bearing on it at all and they would have discussed that with us if it was a policy around that sort of thing.”

“There is a huge expectation and anticipation for that campaign every year – among consumers and farmers – because it is humorous and relevant to the day; celebrating Australia Day.

“It’s almost a cornerstone of Australia Day these days.”

Mr Vallance said expressed disdain that the campaign might have been delayed out of political correctness.

“We’re all over PC, that is so last century.

“It (the campaign) is Australian, it takes the piss – if it is going to fall victim to political correctness then it is a bloody sad day for Australia.”

Mr Vallance also rejected that the campaign should have been delayed because of the bushfires.

“People in these times need a bit of humour, that’s crap.

“If you are going to run with that argument, we shouldn’t have had it because there was a drought.”

He said this year’s campaign had “missed the mark” to promote lamb when people were holidaying outdoors and socialising on Australia Day.

“Of course they have missed the mark, what are we going to go to now; the 28th of February or something every four years, do it every leap year?

Mr Vallance said the best way for drought-affected and fire-affected lamb producers to recover is via good prices and product acceptance, helped by the ad campaign.

Western Victorian lamb producer Georgina Gubbins said if the MLA lamb promotion is to be called a summer campaign, it should have started in December.

“I will be very interested to know what the sales figures are.”

“I think we should have some sort of celebration of lamb.” 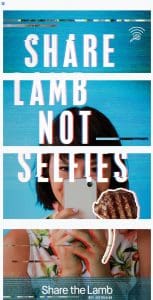 The satirical ‘Lambalytica’ ad taps into the phones of unsuspecting Aussies and unites them over an epic lamb barbie.

MLA’s domestic market manager Graeme Yardy said while there has never been a set day when our summer campaign launches, this year it was launched over the Australia Day long weekend.

“Each year, the Summer Lamb campaign celebrates unity and coming together with lamb, and this year is no different.

“However, in marketing, timing is everything,” he said.

“Given the extraordinary and tragic events facing many Australians from the widespread bushfires to start the year, including many lamb producers, the priority and focus has rightly been on the emergency situation affecting so many, before revealing this year’s marketing campaign.

“We are confident the campaign gives Australians another reason to buy Aussie lamb and support producers, now more than ever.”

Mr Yardy said traditionally MLA sees an increase in sales over the period of its marketing campaigns, which is ultimately positive news for lamb producers.

“We would expect similar results this year.

“For example, last year we saw a 12 percent lift in sales over the five weeks of the Summer Lamb campaign.”

Mr Yardy said MLA liaises closely with relevant peak industry councils on the strategic direction of its marketing investments as part of an ongoing planning, consultation and reporting process, with MLA responsible for final creative development and media execution.

In an interview given to ABC Radio’s Country Hour, Mr Yardy said the new campaign was a chance to make more sales and extend the lamb-selling season beyond one day or a weekend.

His reasons for MLA not having a pre-Australia Day campaign included “media availability … to get the most eyeballs on the ad,” to maximise return on investment for levy payers, and not compete with other events in the news cycle.

“We’ve had bushfires affecting lamb producers across the country and we want to be respectful of that as well,” but he added “there is probably no better time to support lamb producers get on with recovery.”

When asked if MLA was trying to avoid any controversy around the Australia Day date, Mr Yardy said previous campaigns had been about celebrating Australia Day.

“We’ve always tried to find something that was, not necessarily controversial, but provocative, that’s pretty much the way we do the ads … this year is it not about that.

“We want to find something that is topical that has been on people’s minds and will get people talking … that’s not debate we are interested in this year.”

He said the conversation around the Australia Day date “is really irrelevant for us this year.”

In a media release, Mr Yardy said the campaign is focussed on reminding consumers of the great opportunities to enjoy high quality lamb with family and friends this summer.

“The integrated campaign has been designed to support continued strong sales for lamb and ultimately provide strong returns for Australian lamb producers.”

The ad aired on free-to-air TV and Foxtel last night and the campaign will be pushed out across digital, social media and radio. The broader campaign will include content across national media partners Southern Cross Austereo (SCA) and Taste.com.au who will support the campaign across multiple channels, encouraging Aussies to get together and cook some tasty Lamb.