IN THE face of rapidly rising wholesale prices for beef, successful mid-sized retailers like NSW’s Harris Farm Markets are working hard this winter to build awareness and customer support for versatile and relatively inexpensive secondary cuts. 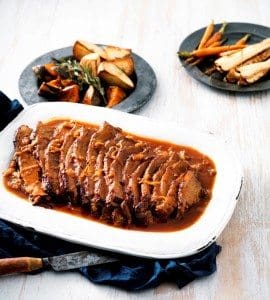 Slow-cooked beef brisket is one of the secondary cuts being promoted by NSW retailer, Harris Farms Market

“If you’ve never said ‘chuck another bavette on the barbie’, you might be soon, because Harris Farm Markets aims to change perceptions about secondary meat cuts by launching a selection of unusual items not widely sold in Australian supermarkets,” last week’s promotional launch said.

The company suggested there were three good reasons to add ‘Curious Cuts’ to the shopping basket:

Click the image below to view a short video of Harris Farms’ ‘Curious Cuts’ campaign.

“The introduction of Curious Cuts will help strengthen the local meat industry by encouraging the consumption of the whole beast on-shore, increasing its value while reducing the amount of production resources wasted,” he said.

Harris Farm Markets meat buyer Antony Williams said with wholesale beef prices having risen by more than 30 percent in the last six months, re-valuing secondary cuts was a ‘no-brainer’ as they would save shoppers money – and when cooked well, were just as tasty as premium cuts.

Last year, Harris Farm Markets launched ‘Imperfect Picks’ to start a conversation about food waste in the fruit and vegetable industry, and said it was now seeking to continue that conversation with the goal of improving the sustainability of the meat industry, through the introduction and popularisation of Curious Cuts.

“It’s our responsibility as a food supplier to start this movement.”

What’s on show under the ‘Curious Cuts’ campaign 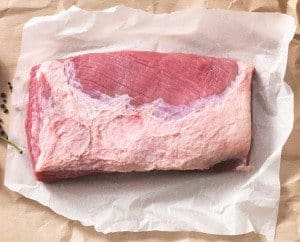 Beef brisket: Beef brisket is a full-flavoured cut that lends itself to many international cuisine styles from Japanese to US barbeque. Beef brisket is a star of the US barbecue scene, particularly in the southern states, where rubs and marinades add regional flavours before the brisket is ‘smoked’ slowly over wood or charcoal. Like most red meat cuts, brisket should be rested before serving. It is commonly cut into squares to serve, when consistent presentation is required. (Click on each image for a larger view). 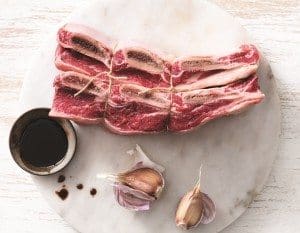 Beef chuck rib: Traditionally popular in countries like Korea and Japan, beef chuck ribs are increasing in popularity all over the globe. The larger scale and fat content makes chuck ribs a near foolproof cut that delivers tender results every time. For best results, marinate short ribs with a wet or dry rub before barbequing, or alternatively braise the ribs for meat that literally falls off the bone. 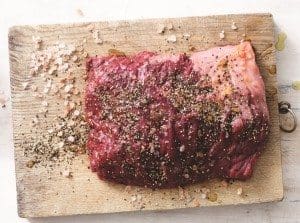 Beef bavette: The bavette (more commonly known as skirt) is an extremely versatile cut of meat; long and flat with coarse grain running across the entire muscle. This means the meat is perfect for marinating, yet firm enough that it won’t collapse during the process and subsequent cooking. Bavette also reacts well to a good naked flame where it is cooked fast – just be sure to cut across the grain. 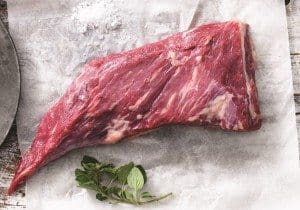 Beef Tri-tip: The tri-tip has nearly always been sold in butcher shops, however it has been sold still connected to the other rump muscles. The tri-tip is located at the bottom of the rump. Not only does it have a rich flavour, but also tends to be lower in fat than most other cuts. The tri-tip is extremely versatile and can be cooked sliced or whole. Because it is lean, be careful not to overcook it – medium is as far as you should go.

Established by David and Cathy Harris as a single store 44 years ago, the business continues to be family-owned and operated.  It employs 1000 permanent and part-time staff, and claims to serve 11 million customers each year. Headquartered at Sydney’s Flemington Markets, the company claims to be Australia’s largest individual (non-corporate) retailer of fruit and veg.

Click here to view more about Harris Farms and its Curious Cuts campaign.