A recent partnership between Meat & Livestock Australia (MLA) and national café chain, The Coffee Club, has resulted in Australian beef taking centre stage in a reinvention of the Australian classic, the steak sandwich. 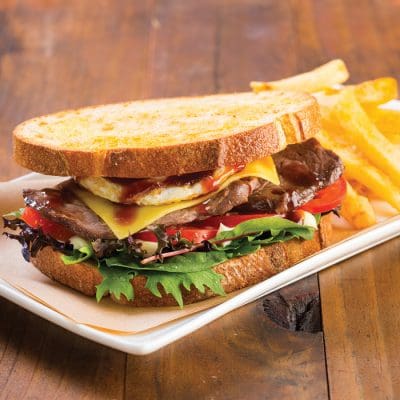 The Coffee Club launched three new steak sandwiches in nearly 300 restaurants across the country the week after Easter, with promotion including MLA’s domestic marketing branding ‘Australian Beef the Greatest’.

The partnership began in late 2017 with MLA working with The Coffee Club’s parent company, Minor International (which operates casual dining brands globally) to hero Australian red meat on the menu.

MLA also worked with The Coffee Club on its existing steak sandwich – revamping the beef cut used (opting for a 100-day grain fed rump steak which suited the kitchen equipment), replaced the bread with toasted sourdough and improved the flavour profile.

The 100 day grain fed steak will be a permanent addition to all steak dishes at The Coffee Club.

“While red meat is often seen as a dinner meal, MLA and The Coffee Club worked together to position beef as a lunchtime favourite,” Mr Burke sai

“The process was about developing a partnership between MLA and The Coffee Club to develop a tailored solution that met their commercial requirements.”

Minor Group Culinary Manager Kenneth Bryce said the wealth of experience and knowledge brought by MLA to the partnership, particularly around different cuts, was invaluable.

“This knowledge helped us explain to suppliers what our business required to create products that were suitable in our kitchens and exceed the expectations of all stakeholders,” My Bryce said.

“The Coffee Club’s most recent promotion celebrates the brand’s Australian heritage through showcasing Aussie farmers and their produce.

“We recognise the importance of supporting local farmers and providing the freshest, quality ingredients for our customers.”

Mr Burke said the Australian foodservice sector generated $45 billion in 2016, accounting for 50 million meals per week making it crucial to the ongoing success of the red meat and livestock industry.

“Foodservice operators have a strong influence on consumer meal decisions, and MLA works throughout the sector to support new product development and menu innovation and to also educate chefs and staff about Australian red meat,” Mr Burke said.