A DETERIORATING A$ value helped lift imported beef prices into the US in local current terms last week.

The improvement was heavily diluted when currency is taken out of the equation, however, with last week’s price in US$ terms barely US2c/lb higher than the week before, at 179.5c/lb.

Market participants continue to worry about price prospects in late (northern hemisphere) spring and summer, but they are somewhat confident about demand in the spring and are willing to book some product for March and early April, Steiner Consulting says in its latest US imported beef report issued yesterday.

But global macro-economic conditions are deteriorating, and this presents a key risk for imported beef prices, especially in the summer and fall of 2016, Steiner warns.

This week’s report says there was generally good US end-user interest in imported grinding beef, but limited offerings from overseas packers.

Australian slaughter is expected to return to more normal levels after three short weeks due to holidays. Weekly slaughter in Australia between Dec 19 and January 8 averaged 62,000 head, compared to around 152,000 head in the October-early December period. Kills returning to closer to 150,000 head per week by February would bolster grinding beef availability for the US market, Steiner said.

New Zealand had been offering bull meat very aggressively in the last few weeks, but that would likely come to a seasonal end in February, this week’s report said.

“Cow slaughter in NZ so far this marketing year has been near year-ago levels but we continue to hear of expanding dry conditions. This could become a factor in February and March and bears watching.”

“For now, market participants in the US are looking to fill some short-term needs as the spot market appears to be quite current. The modest price increase we have seen in the last week or so also represents some short covering. Interest for March and April slots remains somewhat tepid,” Steiner said.

Weaker A$ offers some relief

The decline in the value of the A$ has helped offset the effect of lower US prices. Australian packers are paid in US$ for their meat and those US$ are now worth more in A$ terms.

This week’s price for frozen 90CL imported beef of around US180c is about 27pc lower than a year ago.

“One has to go back to 2011 to find prices near current levels,” Steiner said. “There has been a significant correction in grinding beef prices in the US (including imported) due to expanding supplies and sharply lower prices for competing meats.”

That is about 14pc less than a year ago, but still around 14pc more than what it was during the same time in 2014.

“Prices for grinding beef in the US are surely down, but they are still some of the highest of the past decade,” Steiner said. One of the potential market risks on the horizon is another global financial crisis, given recent stock market trends and gloomy economic outlook out of China.

Two months ago a return to the 2007 GFC scenario looked most unlikely, but now, more economists were willing to contemplate the possibility, Steiner said.

“There are a number of troubling signs, and the collapse in energy prices is only part of that. China economic activity has slowed down considerably and no one really has a clue as to how much more it will decline if the debt bubble there continues to deflate.”

“Brazil is in deep recession as are a number of other developing economies. Emerging markets took on a lot of debt during the good times, and now are struggling to pay it back,” the Steiner report said.

“Their situation grows more precarious by the day as evidenced in rising bond spreads. All of these are important factors for imported beef.” 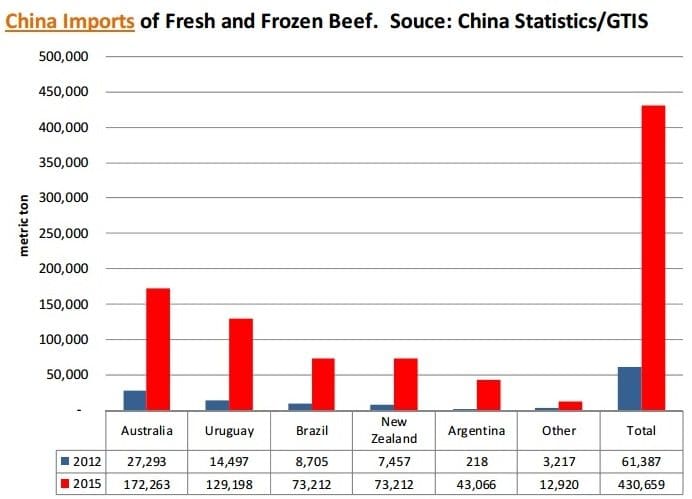 China has emerged as a major importer of beef, something that was not the case prior to 2010 (at least through official channels). Official Chinese import statistics reflected in this graph show imports of fresh/frozen beef in 2015 estimated at a little over 430,000t, compared to just 61,387t in 2012.

In 2008 during the last GFC, Chinese beef imports were almost non- existent.

“Even if the Chinese economy slows down their beef imports will not return to the levels we saw three years ago due to changes in consumer demand,” Steiner said.

“Still, a financial crisis in Asia and an economic slump in China could quickly make the US a market of last resort. In 2008, major beef suppliers turned to the US when Russia started to cancel orders, and we could see a similar situation if Chinese buyers do the same thing.”

“At this point talk of a financial crisis remains speculative, but it is a risk that is more palpable today than two months ago,” Steiner said.