BRAZIL will gain more access to the Indonesian beef market following an announcement this week that a further 11 Brazilian beef processing plants have been approved to commence exports. Brazilian agriculture minister Carlos Favaro made the announcement on Wednesday.

Processing giants Marfrig Global Foods and Minerva are among the Brazilian companies now authorised to export beef to Indonesia, the ministry’s statement said.

The development follows a Brazilian trade mission to Indonesia in September including representatives of the ministry of agriculture and the state-owned Brazilian Agricultural Research Corporation (Embrapa).

Indonesia, the world’s fourth most populous country, is suffering an outbreak of Foot and Mouth Disease and Lumpy Skin Disease, and according to Fernando Zelner, Brazil’s deputy secretary of commerce and international relations with the ministry of agriculture, Indonesia was experiencing “demand not being met effectively by Australia, the country’s biggest supplier.”

The Indonesian imported beef market originally opened for Brazilian meat in 2020, but according to Mr Zelner, Indonesians had “only now seen price and sustainability” in supply out of Brazil.

“An agreement has been sealed since the beginning of the year, and the Indonesians have already sent a delegation to Brazil,” he said. 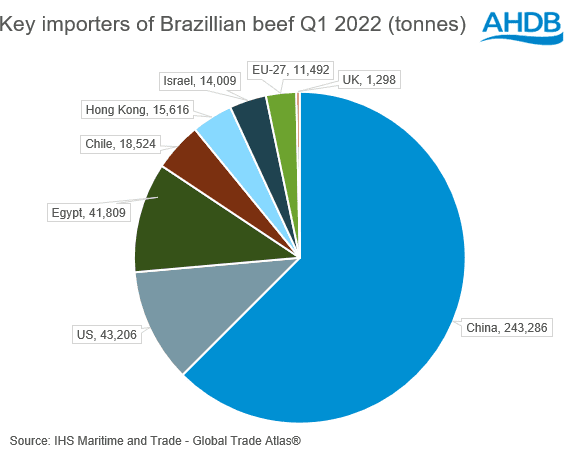 During 2022, Indonesia did not rank among Brazil’s top ten beef export customers, as this pie chart for the first quarter last year shows.

While up significantly from a year ago, Brazil still accounts for less than three percent of Indonesia’s total imported beef volume. Indonesia finished the 2022 year with 39,324t of Australian beef, mostly frozen. That was down about 5800t or 13pc on the volumes seen back in 2021. However Indonesia ranks as a significant offal export customer for Australia.