Comment: Why I don’t trust Chinese data on the pig herd rebuild

One of the biggest drivers of world meat pricing in the past couple of years has been the impact caused by African Swine Fever on China’s pig herd. Here, Thomas Elder Markets analyst Andrew Whitelaw reflects on the extent of the pig herd recovery in China, and whether local reports about progress are reliable

A Chinese herd rebuild is negative for meat pricing. Has it happened?

An analyst role is to interrogate data and combine it with experience to develop ideas and solutions. It is also essential to question the data. Is it reliable? Is it marrying-up with other datasets or just own experience?

Let’s look at an example we can all relate to. The BOM has told us that it has rained overnight based on data modelling. This may be correct, however you haven’t heard a drop of rain on the roof during the night, and the rain gauge when checked is empty. The data might tell you one thing, but experience tells you another.

So what about the Chinese pig herd?

One of the biggest drivers of meat pricing in the past couple of years has been the impact caused by African Swine Fever (ASF). The outbreak caused the loss of a large proportion of all pigs within the nation.

The protein gap caused by the loss is abut 25 million tonnes during 2020. To fill the pork gap, the Chinese had to import proteins of various kinds in increasing volumes, from sheepmeat to chicken. However, the reality is that there is only a finite volume of meat available for export worldwide and a gap of 17 million tonnes emerged.

So the deficit of protein caused by the outbreak of ASF in China (& others) has caused a knock-on effect on meat values worldwide as China gobbles up supplies.

What goes up, must come down. Demand from China has caused a substantial increase in pricing levels due to a lack of local supply. Therefore, the Chinese swine herd is vital to Australian beef producers, as when it corrects demand for imported protein will drop. 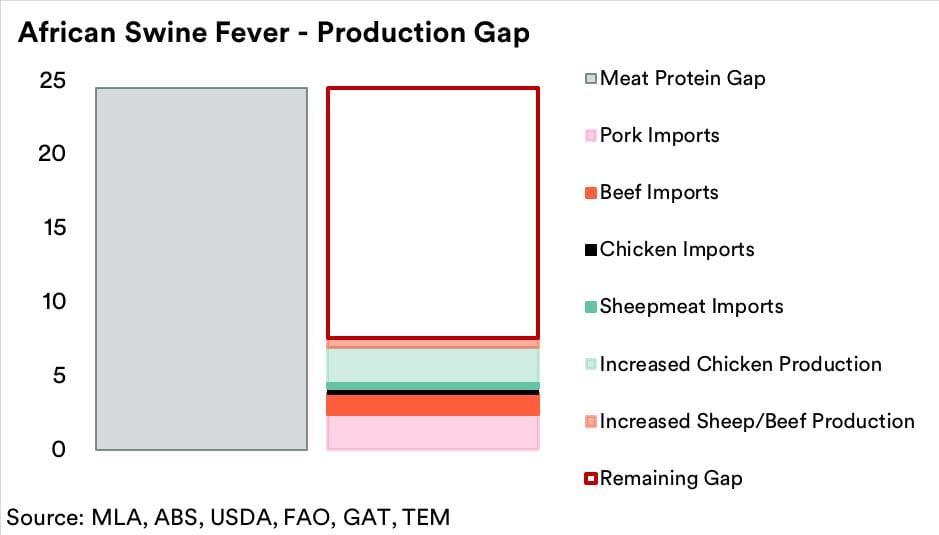 So where is China up to?

We expect that the rebuild will take a little longer, and closer to current government levels towards the end of 2021. Why do we think that the Chinese government is being optimistic?

The reasons, we believe are fourfold.

ASF led to dramatic increases in Chinese imports of proteins. These imports ramped up during the latter half of 2019 into 2020.

However, the reality is that imports of meat have remained at very high levels. In fact, the most recent data (December 2020) shows the second highest import level for all meats.

High import volumes do not point towards a significant increase in pork rebuild to close to pre-ASF levels. If the supply of pork was up, then imports of such volume would not be necessary.

When imports start declining rapidly, then that will point towards an effective rebuild. 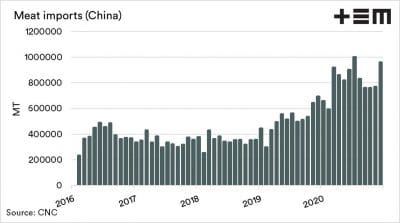 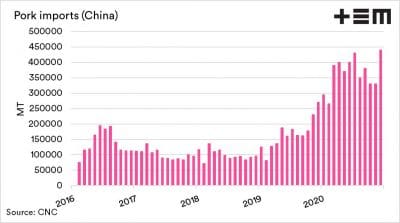 If a price is high, then supply is not keeping up with demand. When the price is low, that is an indicator of supply exceeding demand.

In recent weeks the price of pork in China has been declining, but this may in part be due to the release of frozen pork from state reserves ahead of the Chinese new year. At present, though pork prices are 140pc higher than the same week during 2019.

Some analysts may believe that the higher prices result from higher demand that was growing before ASF. It is far more likely that the higher values are a result of supply not meeting demand.

When pork prices drop considerably, and consistently, then that is a harbinger of an effective herd rebuild. 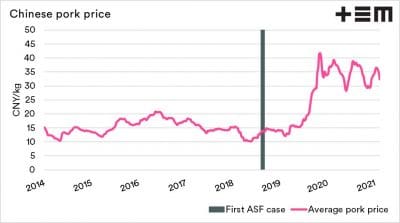 In a notice posted on the Chinese Ministry of Agriculture website back in September (see here), the Chinese government has itself highlighted that there are issues around gathering statistics on livestock.

The above issues don’t bode well for accurate datasets. Suppose the Chinese Ministry of Agriculture holds concerns. Why should we treat the data as gospel, especially when other indicators, such as imports and prices, point to a low supply environment?

There is more to the Chinese pig herd rebuild than just the number of pigs available. Quality is also an element to be taken into account.

The genetics have taken a hit due to the large cull. This has resulted in smaller litter sizes and less productive pigs.

In recent weeks the weight of pigs slaughtered has declined from lower production and farmers selling early, at much lower levels.

While ASF is a major continuing issue, other diseases are rearing their heads, such as Foot and Mouth Disease. While some may take the data from the Chinese government as gospel, we do not. Through analysing various datasets, there are signs that not all is as it seems with Chinese data.

The pig herd will eventually be rebuilt, that is a given. However, the speed of rebuild based on Chinese data is optimistic.

Whilever the swineherd remains constrained in China, it is a positive for our meat pricing.