WHILE the world remains gripped by coronavirus headlines the ‘other’ major virus that has recently emanated from China continues to create a massive void in world protein supply. 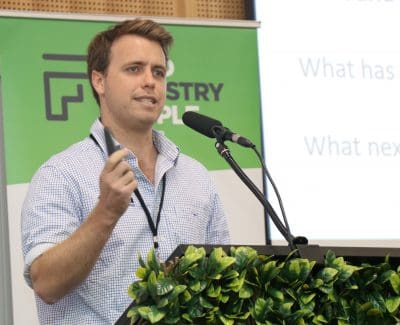 The fallout from the African Swine Fever epidemic that has swept through China’s pig population has fuelled massive short term export opportunities for meat exporters of all shapes and sizes.

Most Beef Central readers will be well aware of the disruptions African Swine Fever has caused to global meat market dynamics, but for those that don’t Mr Tolmie provided a compelling overview of just how significant the impact has been.

The central message was that you could not have chosen a bigger protein in a bigger country for a disease to impact, which in turn has caused major repercussions around the world.

63 percent of protein consumed in China is pork, amounting to 56 million tonnes per year.

“It has often been touted that this is the biggest threat to commercial livestock in our generation and it is hard to argue with that,” Mr Tolmie said.

The massive destruction of pigs caused by ASF itself and culling to try to contain the disease has resulted in a massive protein deficit in China estimated to be in the order of 20 to 25 million tonnes this year.

The expectation is that it may take until 2021 before we start seeing the massive pork shortfall in China to start shrinking again, he said.

Consider that Australia’s entire annual beef production totals just 2 million tonnes and it helps to illustrate how large the 20-25mt deficit left by ASF in China’s protein supply is.

The result has been that China is seeking protein from just about anywhere it can find it.

“We’re calling it the China vortex because they’re just sucking in product from anywhere they can around the market,” he said.

“There is no where that can actually fill the protein gap, China is searching as far and wide as it can to get protein back into its market.

“60 percent of what they consume is pork, it is really important for the Chinese Government to stay on top of this and ensure there is a certain level of supply of protein, and putting a cap on price.”

Beef imports from an increasing array of sources have surged in the past 12 months.

Back in 2015, prior to the ASF outbreak six beef-exporting countries were approved to supply beef to China, but now there are 28.

The deficit has forced prices for all proteins higher, with pork prices increasing most significantly.

That has also created potentially important longer term opportunities for beef and sheepmeat.

“When pork increases (in price) so significantly all of a sudden beef and sheepmeat do not look quite as expensive as they used to,” he said.

“There is a real opportunity as people who cannot consume pork start thinking about other proteins.

As China expands its reliance on a growing range of countries to source protein, many exporting countries are doing the complete opposite and increasing their reliance on China as a single market.

For example China (including Hong Kong) now accounts for more than 50 percent of Brazil’s beef exports, 76pc of Argentina’s, and 48pc of New Zealand’s exports.

For China it currently represents a more balanced 24pc of beef exports.

“For all of these countries there are big opportunities but there are risks involved as well.”

Australia’s reputation as a provider of safe and natural product meant it was well positioned to maintain its premium market share into the future.