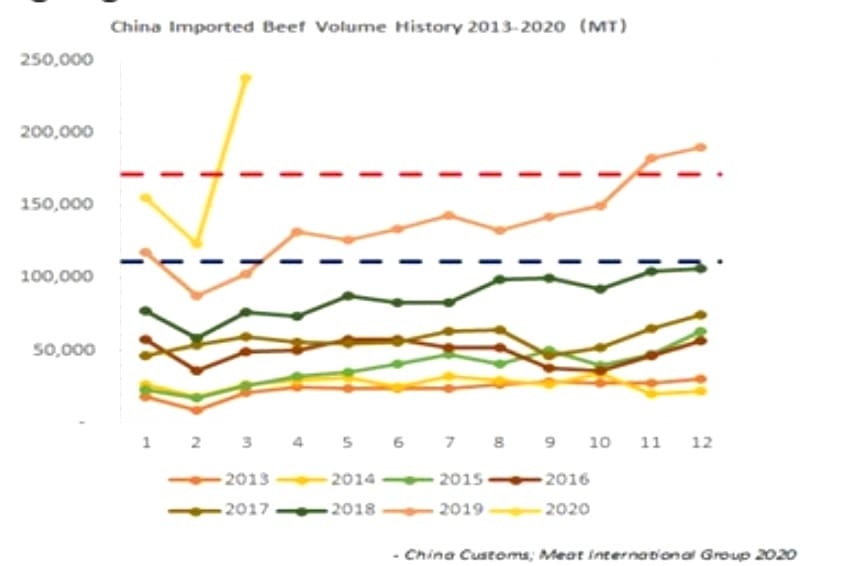 IMPORTED beef arrivals in China during March reached a record 238,000 tonnes, in a further sign that business is getting back to normal after the country’s COVID-19 challenges.

The majority of product being shipped last month was from orders originally placed in the October-December period last year, MIG suggested.

“Due to the swinging price for beef in the fourth quarter last year, massive orders then were stranded in ports for price re-negotiation or delayed their shipping date, which resulted in the huge arrivals last month,” MIG’s Gerrard Liu told Beef Central.

The first quarter (Jan-Mar) of 2020 has seen beef imports to China from all suppliers total 518,000t, surging 64.9pc over the same period a year earlier.

Meanwhile the sluggish catering consumption around the globe caused by the COVID pandemic has contributed to a surplus of global beef production today, likely to suppress global beef prices, MIG suggests.

“Chinese importers can’t be too careful in stocking up, and should be wary of the risk of excessive stocks in storage, should prices fall,” it said. “Keeping high turnover rate in beef is recommended.”

The statistic for Australia is at odds with the Department of Agriculture’s own data for March exports to China, which recorded volume at 18,300t, up 10pc on the previous month.

The discrepancy can be partly explained by the three-week shipping ‘lag’ between export shipments recorded in Australia, and import volumes recorded in China.

The other, bigger factor, Meat International Group suggests, is that a portion of the large Australian import figure recorded in China last month is due to shipments that could not arrive a month earlier due to blockages at Chinese ports, and a lack of power connections for refrigerated containers – causing shipments to be diverted to other ports like Singapore and Korea, only to be forwarded to China last month, once the port issues started to clear.

“The situation in Chinese ports has been much smoother than what was seen a month earlier,” Mr Liu said.

“However there is still very high stock levels in cold storage near ports. Cold stores in main ports including Shanghai, Tian Jin, Shenzhen are almost full,” he said.

While more Chinese are now back at work, the rate of attendance in food service businesses was still not high, currently only 20-50pc, Mr Liu said, due to the lack of consumer confidence and the requirements of prevention and control and current restrictions.

“In China, more than 80 percent of beef is consumed in restaurants, so the restoration of the food service and catering industry is critical to the future demand for beef,” he said.

“We have been keeping a close eye on the beef market price,” he said. “Prices for most beef items have improved around 15pc from one month ago. After a period of rising, pricing is now in a stable period, because of weak demand.

Meanwhile, a company originally established for live cattle export operations to China has been active recently, buying cattle for service kills and export in boxed beef form to customers in China. 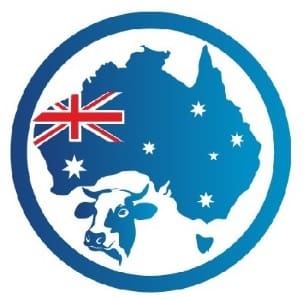 While the still-emerging China live export slaughter cattle trade remains SACC’s main priority, the company has been involved in small-scale, ‘opportunistic’ boxed beef exports to China for the past 12 months, the company told Beef Central.

Managing director Ashley James confirmed that it had been buying saleyards cows in Queensland recently, for an upcoming boxed beef shipment.

“We started doing a bit of boxed beef trading into China through SACC over 12 months ago,” Mr James said.

“It’s a niche market that we have introduced, and given that we already do a lot of livestock business in northern Australia, if it can help our northern business and northern producers by buying these cattle for processing here, we thought, why not? We had been trading a bit of meat into China for a while, so it was only a small step to do a custom kill at a few different China-accredited abattoirs to service our customers.”

Volumes were not particularly significant, he said ranging from three to twenty chilled containers per consignment.

“We’re not going to retire off it, but it’s another arm to our business, during difficult times,” Mr James said.

The program has ranged from basic cow-beef, through to longfed Wagyu F1s that SACC has had custom-fed and processed for specific export orders, depending on what meat business the company’s Shanghai office is able to secure.

“It’s about sourcing what Chinese customers want, at any given time,” Mr James said. “A couple of companies that we deal with in the live trade also have boxed meat business as well, so it makes sense.”

“We’re trying to get a regular cow-beef order organised. If we can get that in place we will continue, otherwise it will be more ad-hoc,” Mr James said.

“Our Shanghai sales team goes out into the market and sees what’s wanted, and if we can do something to fill a demand spot, we’ll do it. It’s not our core business, but if we’re able to incorporate our meat business with what we do in northern Australia in live export, we’re happy to have a go at it.”

One of the challenges recently had been in securing chilled storage in Australia, to accumulate enough product for a shipment, he said.

‘It’s one thing getting a service kill done, but we’ve found it’s been more difficult securing chilled storage here. It’s one reason why the program has not grown much.”

SACC is currently negotiating on a couple of China live export slaughter cattle shipments, following a period of dormancy in live trade since before COVID-19 struck. The company was doing a slaughter cattle shipment to China every six weeks or so out of Fremantle up to December, but there had been no shipments since, as the market went into Chinese New Year/COVID shutdown.

Depending on which ship is used, typical SACC slaughter cattle consignments to China work out at between 2000 to 3000 head.