AUSTRALIA on Friday triggered a Safeguard market protection mechanism in the Korean export market, causing an immediate tariff increase from 29.4 percent to 40pc for Australian beef for the remainder of the calendar year.

Trade officials have been monitoring the export statistics for Australian beef into Korea closely, and the protection triggering, while unfortunate, comes as no great surprise. 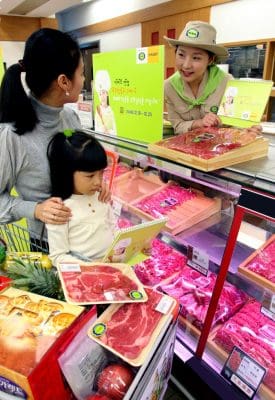 Under the terms of the Korea Australia Free Trade Agreement, a safeguard figure (designed to protect the domestic Korean beef industry against sudden and dramatic rises in imports) of 164,046 tonnes applies in the 2017 trading year, triggering the 10.6pc tariff rise for the rest of the calendar year for Australian beef.

The situation was made worse by a carryover of 2016 product, which is included against the 2017 safeguard volume figure. The export volume figures are calculated on a Korea customs cleared volume basis.

One estimate suggested that close to 10,000t of Australian beef is currently on the water to Korea, and is likely to be entered also at 29.3pc, but this will be deducted from next year’s quota allocation of 167,327t.

The KAFTA safeguard was previously triggered in mid-October 2016, with a total of almost 18,000t in excess of the then 160,829t amount being counted against the 2017 safeguard volume.

The safeguard applies to all chilled and frozen beef exports over the 15-year KAFTA tariff phase-out period. If the safeguard volumes are exceeded, Korea has the discretion of applying a safeguard tariff for the remainder of the relevant calendar year.

MLA via the Australian Embassy in Seoul has sought discretion over the application of the safeguard, designed to leverage favourable treatment of impacted volumes if possible.

The safeguard market protection mechanism was calculated in 2014 using the average of 2007-2009 Australian beef import tonnages and adding 10pc. The safeguard volumes increase by a compound of 2pc each year over the 15 year FTA implementation period.

Independent analyst Simon Quilty suggests the impact of the Korean safeguard being triggered is likely to be minimal, with several Australian exporters believing that strong demand in Korea will see importers willing to pay the higher duty – particularly on higher value items – to ensure that products are entered and cleared before Christmas.

This might see a slowdown in volume shipped over the next six weeks, Mr Quilty suggests, as importers become more selective. Some are likely to focus on selected high-demand cuts in Korea like shortribs and chuck rolls, along with other key chilled items.

“The volume of beef on which higher duties are paid for the balance of the year could be far less than the 21,000t originally estimated, as the market becomes selective in their needs,” he said.

Worth noting was that the impact is expected to only last for six weeks and by early December Korean shipments will be entered directly into the following quota year at a lower duty of 26.6pc for 2018.

“What is a clear message from triggering quota two years in a row is that demand in Korea is in good shape and that augurs well for 2018,” Mr Quilty said.

“But given that this is the second year in a row of this occurring, it has industry participants wondering if Australia will continue to trigger Korea’s safeguard each year for the next 10 years until 2028.”

“Triggering the Korean safeguard could become the norm due to the reoccurring excess beef on the water at the time of triggering, and the carryover that is deducted off the following year’s allocation. It’s creating this ongoing pattern of quota catch-up, should demand for Australian beef remain strong into Korea.”

What is the impact on Australia’s beef industry?

There were two schools of thought on the impact of higher tariffs, with several key exporters believing Korean importers will absorb the costs with little or no impact on Australian pricing, Mr Quilty said. The other is that Australian exporters will bear this cost – but either way the impact will be short-lived with only six weeks of shipments incurring this higher duty.

South Korea is Australia’s third largest beef market taking 14pc of all beef exports with a value of $1.4 billion it is a very important market for the Australian beef industry. Some beef items are almost exclusively exported to this destination. The country takes 76pc of all short rib exports from Australia. Two other key items exported to South Korea are chuck meat and chuck roll, accounting for 48pc and 55pc of Australia’s total global exports of these items.

“These items alone make up close to 20pc of the yield of most steers cuts produced in Australia and with the increase in duty the returns on these items would be impacted if the cost of the duty is passed back to Australia,” Mr Quilty said.

It is estimated that on a $1300 steer (460kg liveweight), the increased duty would result in a fall in steer value of about $30 per head. Should the duty be passed back to Australian exporters in its entirety, the estimated cost for the Australian industry would be $21 million for the six weeks of higher duty.

Where else can Australia ship these items?

Australia has the option of shipping several of the items mentioned above into Japan and China, but with the banning of six Australian plants by China and the quietness of the Japan market might make that difficult, Mr Quilty said.

“I believe many processors might continue to sell into Korea and accept the lower price due to the cost of the increased duty. Items like intercostals might for a limited period be able to be placed in Taiwan, but for the sake of not oversupplying many of these other markets, export processors might take the short-term cost on the chin and avoid adding to the sluggish nature of certain alternate markets with cheaper beef.”

What impact will this have on our competitors?

Australia and the US dominate the Korean market with NZ and Canada also present but in much smaller quantities.

Currently the US under the KORUS free trade agreement came into effect in 2012 and has a 15 year elimination schedule has a 5.3pc tariff advantage over Australia’s FTA with Korea.

“There is no doubt that the increased duty could see Korean importers look to buy beef products from these other countries that would be at a lower duty – in particular the US given the large US beef production that has been occurring in recent months,” Mr Quilty said.

The impact on grinding meat exports is likely to be minimal, as these items can be easily diversified, and Japan and the US will take all these items in volume, he said.