EXACTLY 50 years ago today, the Australian beef industry embarked on an export project that would change the face of the industry forever.

The nation’s first commercial shipment of chilled beef was consigned on 29 March, 1970 to customers in Japan, in what was arguably the biggest single step the beef industry has taken in moving from its traditional ‘commodity-driven’ focus to a ‘quality-driven’ approach.

Prior to that date, all commercial Australian beef and sheepmeat exports were in frozen form, doing absolutely nothing for product quality.

But two key technology developments paved the way for change.

The first was the development of Cryovac vacuum-packaging technology. The second was the launch of containerised sea shipment, allowing chilled cartons to be loaded and shipped in an orderly fashion, instead of simply being placed into slings, and stacked in bulk in a ship’s freezer holds.

Worth celebrating, also, is the fact that Australia was at least a decade ahead of the United States in moving into chilled exports.

Last year, some 309,000 tonnes of Australian beef was exported in chilled form, representing more than 25pc of all exports for 2019. In value terms, chilled exports were worth close to three times as much as frozen, on a $/kg basis. Japan now takes around 150,000 tonnes of chilled beef per year.

The first small trial chilled cryovaced beef shipments were made in 1969 through the Australian Meat board (AMB, the predecessor to AMLC and today’s MLA), World on a Plate recounts.

The following year, on 29 March 1970, the first full container as part of a commercial shipment was made by Thomas Borthwick, using product from the company’s Brooklyn plant in Victoria.

This was also one of the first container shipments of any commodity to Japan from Australia.

The container, carrying 590 cartons, left Melbourne on 29 March on the Hakozaki Maru, bound for importer C.Itoh & Co in Kobe. After reaching the port of Osaka on 26 April, the container was transferred to Kobe where it was unpacked on 29 April – a total of 31 days.  Brian Linacre from WR Grace recalls the existing bag sealing technology at the time, using wire clips, meant all the openings for the bags had to point upwards, so they didn’t leak. The problem was eventually overcome with the move to today’s heat-sealing solution for vacuum bags.

After arrival, a special display and sampling was held on 1 May 1970, attended by representatives of the trade in Japan.  Brian Linacre travelled to Kobe to oversee the unloading.  All parties reported on the good out-turn of the product and the superior eating quality, World on a Plate recalls.

Retired former Victoria meat industry executive John Urquhart has vivid memories of the first chilled beef shipments to Japan, and supplies the photos of the novel wooden cartons it was shipped in. published here.

He still uses leftover wooden cartons from the early trade to store his tools in at home (see image below). More of Mr Urquhart’s recollections of the early days of chilled trade below. Credited in Steve Martyn’s book, World on a Plate, as being the driving commercial force in the early stages of the new opportunity in Japan was John Palfreyman, then marketing manager of Thomas Borthwick & Sons in Australia.

In terms of the Japanese market, frozen beef from Australian grassfed cattle were satisfying a demand in the low class market only, particularly for canned meats, curries and distribution through low price retail outlets.

Borthwicks and Palfreyman believed there was an opportunity to supply beef that the Japanese would perceive as high quality, relative to what they had previously seen from Australia.  Clearly there were price advantages if Borthwick’s could sell Australian primal cuts into the newly-identified high quality market segments.

John Palfreyman had been influenced by the writings of Max Brunk, a Professor of Marketing at Cornell University in the United States.  Brunk had written on the value-added concept of meat marketing and Palfreyman believed the same concept could be applied to the Japanese market.  Part of the concept included correct packaging, and from this debate the concept of the now famous Borthwicks wooden pine boxes arose.

Argentina had already put trial chilled primals into the United Kingdom in cardboard cartons transported in the bottom of the hulls of conventional vessels. The out-turn had mostly been poor, with broken cartons and often lack of temperature control, with some product having frozen. The idea of adding value by using wooden pine boxes/crates in combination with the better temperature control in the new containerised vessels became a key part of the Borthwicks strategy.

Wooden boxes were already in use for the distribution of vacuum-packed cheese, fish and other perishable commodities. The boxes would have to stand up to rough handling and remain undamaged with temperature changes and condensation which might leave them moist during transport, a major problem with the Argentine shipments.

The product supplied in the first chilled shipments to Japan was a natural fall full-set packed as primals in a wooden box, World on a Plate recounts. The original wooden boxes had a cardboard lid with its own printed message about the contents.

Underneath the lid was a large card which set out in Japanese characters factual information about the chilled product including shelf-life and that it had not been frozen.

It also pointed out that the product would assume better colour after removal from the vacuum packaging, and exposure to air (known as bloom).

Some Japanese retailers valued the wooden boxes for their timber; others as fuel for their fires and some as reliable evidence to customers (once the product was well-known in the market) of Borthwicks’ superior quality.

The wooden boxes however were too expensive to maintain and were not always kind to the product. By about 1977 they were replaced with today’s familiar reinforced cardboard boxes, but the initial image generated by the wooden boxes and the superior quality of the presentation set the early market premium. The reputation has lasted to this day.

Competition soon followed with shipments from other Australian early-adopter meat exporters, including Teys Bros, Angliss and Swift (the distant forebear of today’s JBS). 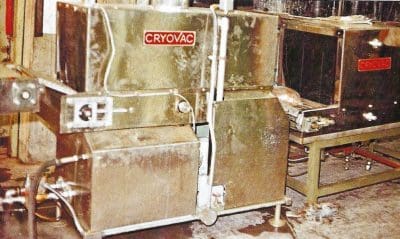 While Borthwicks developed the trade, it was refined with the help of scientists including the legendary Barry Johnson, working out of CSIRO’s Cannon Hill meat precinct, the research and development team at packaging supplier WR Grace and others. There were many early problems, especially discolouration and undesirable odours but the trade continued to evolve and grow.

To help overcome the continuity of supply challenge given seasonal changes in Australia, it was decided by Borthwicks to source some of its growing Japanese chilled market from its North Queensland processing plant at Bowen. Richie Goldup was sales and production manager at Bowen at the time, and was responsible for the first shipment in containers out of Queensland in 1971.

Given the reputation of the original shipments from Victoria, the first Queensland shipments were discounted to gain market acceptance.

Seventy-seven year old John Urquhart, who supplied the photos accompanying this article, started as a 17-year-old management trainee with Borthwicks in 1960. His father Alec was the livestock buyer for Borthwicks at Portland for 37 years. One of Alec’s trainee buyers was Queensland lotfeeder and former ALFA president, Don Bridgeford.

John started at Borthwicks head office in Melbourne writing invoices, before working through most parts of the business (except livestock buying) finally joining the meat marketing/sales desk in 1969.

He was one of the team at Brooklyn involved in the first chilled shipment 50 years ago, and has clear memories of the events to this day.

“We probably did not appreciate at the time just how significant vacuum packing technology would become, and its ability to preserve beef in better quality,” he said.

“The arrival of vacuum packaging was one of the developments that helped the stars align, to allow chilled exports to work,” he said. “The other factor was clearly containerisation.” 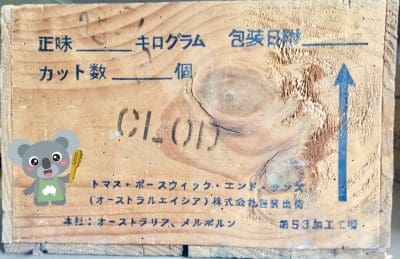 “At that time, cardboard carton technology was not very advanced, and cartons would go floppy if they got damp. Secondly, wooden boxes gave an impression of quality, which supported the product. Packaging has always been so important to the Japanese people, and the wooden boxes provided the impression we were hoping to deliver.”

Timber boxes lasted until about 1977, when cardboard carton performance improved, and were cheaper to produce.

He recalls that half of the first 12-tonne chilled consignment went to importer C. Itoh & Co’s wholesale retail customer, Kowatomi Shotan, a member of a ‘breakaway’ group of progressive Japanese retailer butchers keen to trade in imported beef. The other half went to members of the much more conservative Tokyo Butchers’ Association, who were less receptive.

“It was competing more or less directly with the popular Japanese domestic dairy steer beef,” he said.

Through the Royal Agricultural Society of Victoria, Borthwicks for a number of years held a Japanese Chilled Beef hoof and hook competition at Brooklyn, to try to educate cattle producers about the need for quality and consistency, and the specifications required for the new market.

“There was little feedback at all from the customers for a few weeks after the first shipment arrived, but all of a sudden they realised that chilled imported beef was a completely new and different product from what they had seen before (frozen), and by June or July, all hell broke loose, as the phones started to ring with more orders,” he said.

“During the back half of 1970, Australian chilled beef imports increased quite rapidly.”

An early breakthrough happened when one of Japan’s powerful consumer cooperative groups (represented by housewives), formally approved the sale of Australian chilled beef in Japanese supermarkets.

“That was like a Papal blessing,” Mr Urquhart said.

Along the way, a lot of education was required to help the Japanese understand the performance of beef sold in chilled form, and how to handle it – especially things like the odour that comes from a vacuum-pack bag of meat, when it is first opened, and the improvement in colour, as it is exposed to the air, after opening.

While still working for Borthwicks, Mr Urquhart moved to Japan to represent the company for 18 months from 1974-75, before joining the Australian Meat & Livestock Corporation from early 1979 to 1985 as Japan region manager, working with John Schumacher. He replaced Ken Wilson, AMLC’s original Japan market representative.

“The first chilled shipment 50 years ago shipment on the Hakozaki Maru V6 was a pivot point that has changed the whole red meat industry – literally from top to bottom – or conception to consumption,” Mr Urquhart said.

“Within a year, the ramifications of the Japanese chilled beef market were felt in every link of the Australian beef supply chain – from genetic development, breeding, finishing, processing, shipping, trading and, finally, distribution and retailing within Japan. The foundation was set for every link in the chain industry to develop and embrace a ‘market-oriented mentality’.”

“Whilst there were hiccups along the way, the journey was a team effort,” he said.