Australia’s beef access to Europe is in danger of being “bloodied in the crossfire” of an EU-US trade war, cattle producer and beef exporter Josie Angus told the Meat & Livestock Australia global markets forum in Canberra on Tuesday.

The 3500 Australian cattle producers who have invested in meeting the standards of the European Union Cattle Accreditation Scheme (EUCAS) are waiting to learn if the EU will shut them out of a large portion of its imported grainfed beef market, in response to US demands for exclusive access to the majority of the quota. 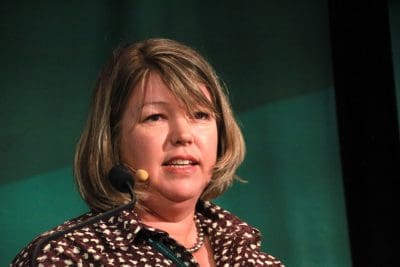 Josie and her husband Blair and four children run 35,000 cattle on properties spanning 162,000 hectares of Central and Northern Queensland. They export beef through their vertically integrated beef marketing company Signature Beef to restaurant, food service and wholesale customers in over 30 countries.

The Angus family was one of the very first to register for the European Union Cattle Accreditation Scheme (EUCAS).

Europe is the world’s second largest beef market with the largest number of high income households in the world, and Australia has the most onerous accreditation system of any beef supplier to its market, Josie said.

She said their own business has invested “a huge amount of time, effort and money” developing valued customers to the EU, and the market has become one of their most important.

Collectively the producers and beef businesses represented in the room at Tuesday’s MLA global market forum would have invested hundreds of millions of dollars moving their product from a commodity to branded beef supply chains.

She said it was time Australia’s trade policy kept up with the level of investment and innovation the Australian beef industry had made.

Her own research of Australia’s recent trade history with Europe suggested Australia had ‘upheld its end of the bargain’ in multiple trade agreements with the EU, had opened its doors, provided tariff and quota free access to itsmarket and had “played by the rules”.

Australia had also voluntarily restricted access for its own sheepmeat into Europe – to the point it now has just one tenth of the access New Zealand enjoys – in return for Europe promising that its subsidised product would not compete against Australian product in our Asian markets.

“There has been little improvement in access and in fact we’re threatened with losing a major part of our EU beef access, and the EU are rapidly expanding their reach in Asian markets, currently signing many FTAs in our region,” Josie said.

Australia currently had a trade deficit with the EU of $30 billion, and a deficit on agricultural goods of $1 billion.

Each year while Australians ate 3250 grams per capita of European red meat (which includes pork), Europeans were nibbling through just 65 grams of Australian beef and sheepmeat.

Europe was an agricultural powerhouse producing over 32 million tonnes of red meat per annum. European meat exports to Australia (principally pork) accounts for 6.5 percent of Australia’s domestic red meat market, while the beef and sheepmeat Australia supplies to Europe represents 0.14 percent of its domestic market.

EU and US agreement ‘will not be discriminatory’

Josie said the memorandum of understanding between the US and EU on trade was very explicit in stating that the 481 grainfed beef quota “will not be discriminatory on a country of origin basis”. 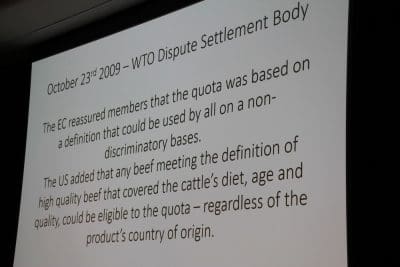 The EU and the US had also previously given multiple assurances at the WTO that this quota would remain non-discriminatory on a country of origin basis, she said.

While she had heard arguments that Australia could get a great Free Trade Agreement deal with the EU if it did not oppose the US receiving a bigger share of the EU beef quota, she warned that EU 481 quota negotiations should remain completely separate to FTA negotiations.

“Giving one of our key competitors a free shot at substantial preferential treatment in the market for no matter how long, to me, looks like market suicide,” she said.

“An FTA for Australia is a once in a lifetime opportunity. We need our government to be bold.

“We shouldn’t muddy the water on such an important negotiation with some kind of trade off on 481.”

She said an FTA that is bold and ambitious for agriculture will take time. It will likely face staunch opposition from farmers in the EU who have enjoyed incredible levels of market protection in the past.

Australia was known for its world leading commitment to animal welfare, food safety and environmental sustainability and the quality and integrity of its product. 3500 Australian producers have invested to meet the standards EU requires.

By contrast, only a very small number of US producers are currently eligible to supply the EU, but may still be gifted preferential allocation of quota on a discriminatory basis while 3500 Australian producers were “left out in the wilderness”.

“The opportunity cost of the lost trading opportunities that have been endured by those EUCAS producers alone is incalculable,” Josie said.

“To deny those farmers the opportunity to supply this market, with all respect I feel is morally and politically bereft.”

She said Australian producers were pleading with hope that all counties involved play by the rules.

In the meantime, European beef and red meat is increasing its foothold in Asian markets.

In the past four years Ireland had increased its exports to the Philippines by 911 percent per annum, while UK exports to Hong Kong had grown by an equivalent amount.

She said an important message was that European farmers had nothing to fear from Australian meat in Europe.

“There is no mountain of cheap beef in Australia, nor will there ever be,” she said.

“Globally we represent just 2pc of the herd and just 3pc of beef production.

“We have the world’s highest cost of slaughter, and our regulatory settings for labour, for food safety, for the environment, coupled with our extremely low levels of Government support, mean we will never be a threat on price.

“It is beholden on all of us in the room to ensure the Australian Government do not take their foot off the pedal in achieving this.”