THE imported beef market landscape in China is changing dramatically, with Australia facing competition from a rapidly growing number of approved beef suppliers from across the world.

In the space of six years, China has transformed from a minor buyer of beef to a global importing powerhouse – second only to the US imported beef market in 2017, but likely to become the largest global importer this year.

Judging by the current volume of imported beef trade, China’s total beef imports (excluding trade into Hong Kong) in 2018 are expected to exceed one million tonnes for the first time, up by more than 320,000t or 48pc compared with last year’s figure of 680,000t. 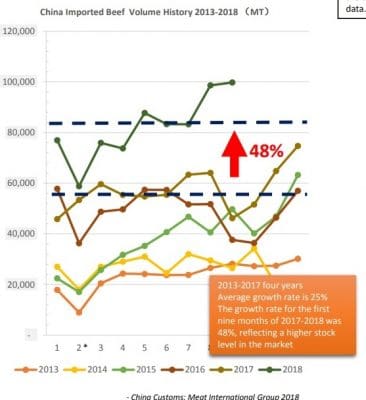 In September, China imported 99,752t of beef from all supplier countries, the highest monthly volume in history, worth an estimated US$462 million.

“This figure has now exceeded the reasonable natural demand potential of the Chinese market, but the lack of meat protein caused by African Swine Fever’s impact on domestic pork production may support higher volume and price,” MIG’s recent report said.

Based in previously yearly cycles, volume in the final three months of the year (October-December) will likely be higher again than September volumes.

“The performance of beef consumption in the Chinese market in the coming months will determine the profit and loss of major importers this year,” the report said.

Imported beef prices had started the year averaging around US$4.90/kg CIF, before falling to US$4.30/kg in May, but had since recovered to around $4.60/kg in September.

Although the Chinese currency, the RMB continued to depreciate, the exchange rate of South American countries depreciated even faster in the last quarter, helping fuel demand for beef out of Brazil and Argentina.

Among China’s major imported beef suppliers, Brazil is now the dominant player, accounting for 39pc of trade volume in August (see graph) and 40pc in September. Next largest was Argentina with 24pc/14pc, followed by Australia (14pc/20pc), Uruguay (12pc/10pc) and New Zealand (5pc/11pc). 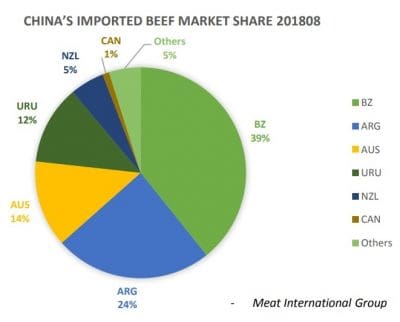 While Australia’s overall market share in China has declined as the imported beef market has grown, and more supplier countries become eligible, Australia has still experienced a sharp increase in volume of low and high value cuts shipped to the market.

Australian manufacturing exports to China doubled in the first nine months of 2018, while premium chilled and grainfed shipments increased by a similar percentage.

Import volumes from the US reached just 450 tonnes before the elevating trade war between US and China saw tariffs on US beef rise in July from 12pc to 37pc. The additional 25pc tariff places US exporters at a disadvantage, compared to the 7.2pc duty that Australian beef imports are subject to under their free-trade agreement with China.

A bevy of other smaller beef exporting nations have also gained access to China over the past year or so, including South Africa, Costa Rica, Chile, Ireland, Belarus, the Ukraine and Italy, although combined volume so far this year has been less than 1200t, according to MIG’s figures. Other potential exporters, like Canada and Mexico, are making China access a priority.

Brazil’s exports to China in September reached almost 36,500t, a record monthly high, with exports to Hong Kong at 28,600t.

Brazil’s overall export volume to all markets for 2018 year to September had reached 1.19 million tonnes, and were likely to record a full year volume increase of at least 10pc.

“The main reason for this growth is still China, which purchased 517,000 tons of Brazilian products in the first nine months of this year, through Hong Kong and China. As a result, China accounted for 43.3pc of Brazil’s export sales in 2018, compared with 36.9pc in 2017,” MIG said.

China is now the single largest export market for beef from Brazil, Argentina and Uruguay, and a major buyer of product from New Zealand (second) and Australia (fourth). South American suppliers have made the transition in the last three years as their traditional markets, such as Russia, the Middle East and Venezuela, have presented troubles in one form or another.

The top 20 Chinese importers accounted for 51pc of total monthly imports at present, MIG said, but the increase in the proportion of ‘self-operated’ importers indicated that the market was optimistic about future market conditions and consumption.

“A large number of importers would like to hold stocks,” it said.

Volume for some popular imported beef items, such as shin/shank, reflected the lack of supply in the spot market, which was affected by the Chinese government’s recent clamp-down on the ‘grey-trade’ smuggling channel, MIG said.

Shin/shank remained the top import item in September, the futures price declines, and the domestic spot price continues to climb, resulting in a profit margin for the single product.

Despite trade wars and some signs of the economy slowing, China has had a significant impact on the global beef market. The expansion of beef imports reflects demand from a growing class of urban consumers that can afford it and the economy’s transition from being investment to consumption-led.

Where could it end?

In a recent China market report, MLA said while China was expected to continue to expand as a beef customer, it was unlikely that the pace of growth recorded in 2018 could be sustained, from a supply or demand perspective.

“There are also other forces possibly at play this year. A government crackdown on shadow bank financing may be leaving some domestic processors short of credit, leading to additional import requirements,” MLA’s report said.

“Meanwhile, the surge in trade has also coincided with the emergence and spread of African Swine Fever cases across the country (see recent reports by analyst, Simon Quilty), potentially leading some to cover protein shortfalls – current or anticipated – with beef, as well as imported pork and poultry.”

As at 23 October, 35 cases of ASF had been reported across China, with the virus moving south-west into Yunnan and Hunan provinces.

While Chinese beef imports had consistently grown since 2012, there were a range of inherent risks in the market, MLA said.

Firstly, across all proteins, imports accounted for a minor component of consumption (7.8pc for beef according to 2017 FAO data).

“Just as small falls in local production can see a surge in demand for imports, a small recovery can have the opposite effect,” MLA’s report said.

Lastly, the Chinese economy has slowed in recent quarters, compounded but an escalating trade war with the US that shows no sign of resolution.

In the September quarter, real GDP grew by just 6.5pc year-on-year – the lowest level since the Global Financial Crisis of 2007.

“Given exports to China have ridden the wave of a growing middle class, a slowdown or reversal could see the imported beef market cool-off or even contract,” the report said.