Machine learning helps to validate the species, provenance and cut of meat samples

THE analytical power of machine learning models is helping to validate the species, provenance and cut of meat.

Despite the inclusion of analytical testing within meat production systems around the world, meat fraud still happens. The horsemeat infiltration of the European beef supply chain in 2013 is an example (click here to view earlier story).

The roo in the stew

Australia’s most infamous case of substitution took place in 1981, when kangaroo meat was substituted for beef in an export consignment to the US. The events profoundly damaged the industry’s reputation at the time, and Australia narrowly avoided losing its beef export license to the US.

The main culprits were charged with forgery, exporting a prohibited product, false trade description, conspiracy, perjury, theft by deception and selling pet meat for human consumption. Several men received up to four and a half years’ jail. The events were captured in a popular satirical song of the era, “Who put the roo in the stew?”

A recent 20-year analysis, which examined more than 400 incidences of beef fraud around the world, found that counterfeiting meat species or substituting one cut for another (within the same species) were the most common type of meat fraud. 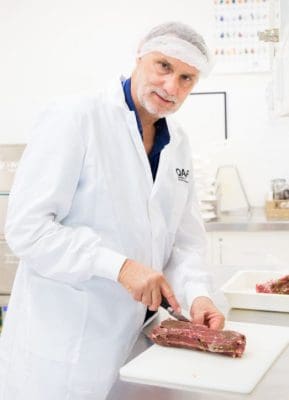 This kind of counterfeiting – with its food safety and consumer swindling implications – is being tackled by Queensland Alliance for Agricultural and Food Innovation Professors Louwrens Hoffman and Daniel Cozzolino.

“And high-value products, such as meat, are especially susceptible to food fraud.”

As QAAFI’s chair of meat science, Professor Hoffman is concerned by limitations in the testing technology currently used within meat production systems to detect deliberate fraud or accidental substitution.

Consequently, he has been examining newer technology for its potential to overcome current limitations and says a step-change in testing capability is possible.

“The cut, the species and even the provenance of meat – down to the region of origin and feedlot – can now be rapidly determined using imaging technology that is easy and non-destructive to use,” he said.

Professor Hoffman said the needs of industry can be best met by using light-based (spectroscopic) technology to provide data about a meat sample. The analysis of this data is done with advanced machine learning algorithms that QAAFI is helping to develop.

He said that light is especially useful for analytical purposes because of a quirk of physics. Atoms (or more specifically, electrons in atoms) can absorb and emit light. As a result, every atom, molecule and compound in the universe produces a unique ‘spectrum’ of reflected light. This acts as a signature that can be used to forensically identify any compound.

Prof Hoffman is recommending the use of commercially available devices that emit light in the near-infrared (NIR) range.

Handheld NIRs project light onto a meat sample and collect the reflected light – called the ‘signature’.

The caveat with this approach is that the spectral signatures that can identity meat cuts, species and provenance have to be decoded beforehand. This is where additional R&D is needed. Meat is a biochemically complex compound. By necessity, the imaging-based identifiers of meat traits are equally complex and surpass the ability of human senses to detect.

In the past, the problem would have hit an impasse because of this. Instead, Prof Hoffman turned to machine learning algorithms to solve what amounts to an enormous, statistical, jigsaw puzzle.

“To develop the analytical software, we matched the spectral signatures of meat products of known species, cut, provenance or other variable of interest,” he said. “That data is used to train machine learning algorithms to detect what distinguishes the different samples from a complex set of spectral clues.”

This training process for machine learning could be expanded in the future as industry needs evolve. This could come to include, for example, insects as they start entering the food and feed supply chains, something that Professors Hoffman and Cozzolino also work on from a food-safety perspective.

Prof Hoffman has also been involved in field testing the handheld NIR technology, including in South Africa where it proved highly effective.

“We could rapidly differentiate between South African game species, the muscle type and whether the meat was fresh or frozen,” he said.

Accuracies for African species differentiation ranged from 89.8 to 93.2 percent and included ostrich, zebra and springbok game meat. Given that South Africa currently has no game meat quality standards or standardised meat cuts, this kind of technological advance opens up new opportunities to cheaply and effectively provide consumer protection.

Prof Hoffman pointed out that the technology is only as good as the back-end analytical software. That is where industry should collaboratively focus its attention in terms of R&D investment to effectively stamp-out meat fraud, he said.

“Once the machine learning models are operational, the system is fast, cheap, reliable and accurate,” Prof Hoffman said.