A few facts about fake meat

“Imitation is the sincerest form of flattery” and that is how fake meat should be viewed, not as a threat to beef producers, but a sincere endorsement of the extreme desirability of beef, the prince of meats.

What a great idea to allow vegetarians, vegans, Hindus and others who can’t eat beef for one reason or another to enjoy the delicious taste of beef without having to actually eat the real thing.

Having fake meat on the menu doesn’t take away from those who like beef, it just adds a whole new group of customers to the enthusiastic crowd who are lucky enough to be able to enjoy real beef. Impossible burgers are certified Kosher and Halal (but not organic) so a restaurant can provide this group of customers with a burger meal that satisfies their religious requirements without needing to have an entirely separate meat supply chain within their limited kitchen space. See below the burger section of the menu from the very smart Saxon and Parole restaurant in Bowery, New York where they advise that the Impossible burger option can also be prepared in a form to satisfy vegans. When I visited recently with my family, my son-in-law had the standard Saxon burger and I had the Impossible burger. The second photo below shows two slices of burger patty with the larger piece on top the real beef version while the one below is plant based. Both patties were delicious and I could not tell the difference between the taste of the two. 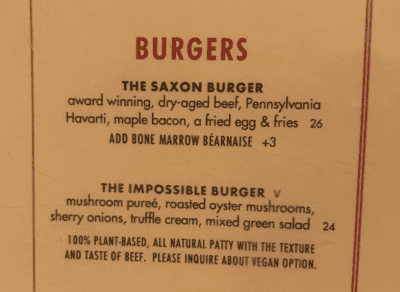 The burger section of the Saxon and Parole restaurant, Bowery, New York. The real beef patty section is at the top with the plant based version below. I assume the plant-based patty is thinner because the wholesale price is more expensive.

The two major brands of plant based beef in the US, Impossible Foods and Beyond Meat use a wide range of different ingredients to create their products even though they both end up tasting just like beef. The list of products used by each company are available on their web sites although they both state that they are always ready to modify their recipe if they think they can improve on it.

Leghemoglobin is short for legume hemoglobin or heme which is a protein found in the roots of leguminous plants (in this case soya beans) which Impossible Foods believes gives their product a uniquely meaty flavour and the appearance of blood in the meat.

The nutritional comparison below shows the surprisingly similar analysis of beef and the three of the major plant based meat patties. 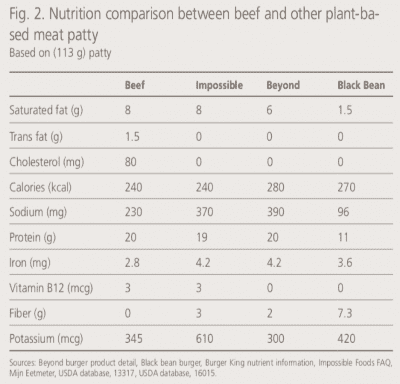 In the more mature markets of the western world a greater proportion of consumers are opting for less or no meat in their diet with rising numbers of flexitarians, vegetarians and vegans. A flexitarian is a vegetarian who occasionally eats meat and fish. By contrast, the growing populations with increasing prosperity in the developing countries throughout Africa and Asia are increasing their consumption of meat. They have been forced to be flexitarians for their entire existence because they were poor but now that their incomes are finally rising they are choosing to eat more meat and fish because they like it. The richer they get the more beef they eat; the well documented Chinese consumption statistics confirm this potent trend (see Beef Central 27th September : Chinese beef imports from Australia increased by 65% year-to-date July).

The UN predicts that during the next decade 1 billion more people will enter the middle class. The danger is not that plant based products will lead to reduced demand for real beef but that there will not be enough of either form of meat to feed a world with a lot more people who can and will want to eat increasing quantities beef, regardless of what it might be made from. Yes, the number of products produced by biomimicry are having a meteoric rise in the west but as shown by the table below from Nielsen, 2018 annual beef sales were $25 billion while annual sales of plant based beef were about $160 million.  The spectacular growth of plant based food is only a very recent phenomenon with Beyond Meat founded in 2009 and Impossible Foods in 2011. Since then more than $17 billion has been invested across the industry with some of the world’s biggest food companies involved including Tyson, Conagra, Kellogg and Kraft/Heinz.

Table below : Animal-based and Plant-based product Retail Sales in 2018. 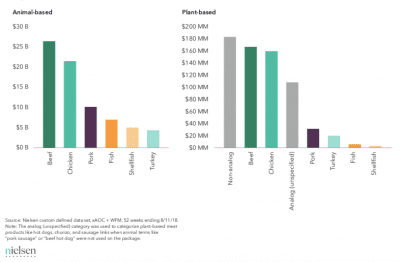 Cell based meat is produced when real beef muscle cells are used to culture larger quantities of real cells in a factory. While this technology has been proven to work, the process is still extremely expensive and unlikely to become a commercial reality for some considerable time.

The naming issue is currently the subject of new legislation in some US states but it doesn’t appear to have the same concern or venom as other similar debates possibly because of the back-handed complement inherent in producing fake meat for vegetarians and vegans as well as the fact that the product is always clearly identified as plant-based. In US supermarkets the plant-based product is situated within the normal beef display areas. Beyond meat mince and sausages are displayed along with the real beef in this New York supermarket.

The only fake meat aspect which I strongly disagree with is some of their industry’s outrageous environmental and public health claims that imply beef production is evil while the environmental footprint of plant-based meat is as light as a fairy’s.

The table below has been created from information collected from the manufacturers’ web sites.

The major ingredients for the two popular burgers include peas, canola, coconuts, soy beans and sunflowers.

Were these crops not grown on large areas of land which were previously covered with forest? Did they not use tractors, large trucks and other heavy machinery, diesel, fertilizer and herbicides? Were any of these products grown using GMO technologies? Did the construction and ongoing energy supplies for all of their factories and supply chains have no impact on the planet? Were the very large number of other essential ingredients found under a maidens pillow?

The plant-based beef is good, they don’t need to sprout this nonsense to support it.

Beef eaters may well try fake meat just as I have, simply for the experience, but they will return to beef because they love it and because plant based beef is more expensive than the real thing.

Snooty French champagne producers fight to protect the name of their product at all costs but beef producers don’t need to lose any sleep over fake meat.

On the contrary, they can feel justifiably proud that entrepreneurs across the world are spending billions of dollars to copy their magnificent product so that people who can’t or won’t eat real beef can enjoy its wonderful texture and flavor just like the rest of us.

And even then there still won’t be enough to go around.