Why buy at the top of the market? DESPITE rising interest rates and tightening economic conditions, big rural property deals continue to be done at record price levels. What do these buyers know that the rest of us don’t?

It is a question that might seem to require a complicated answer, but for one leading landholder who has invested in the vicinity of $300 million in rural property purchases in the past year, the answer is surprisingly simple. 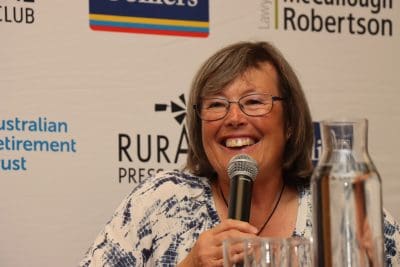 At a Rural Press Club of Queensland lunch in Brisbane last week Peter Hughes from Hughes Pastoral Company was asked by moderator and rural journalist Sue Neales (right) why his family is continuing to make major property purchases at a time when the market is close to what many might see as peak value.

“It is an interesting question,” Mr Hughes replied.

“The problem with buying when they’re down is that you usually only get the second rate ones.

“If you want to buy some good ones they only come on the market in the good times.” 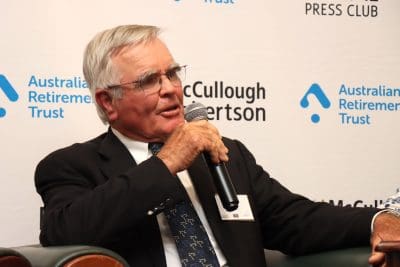 Mr Hughes said 13 years as a director of Stanbroke Pastoral Company, when he spent a fair bit of time travelling around the company’s properties, had provided a great training ground.

After a run of difficult times for the cattle industry, he said you “almost had to pinch yourself” at the opportunities that had been created in the last couple of years with a strong cattle market and low interest rates.

“I think you see an opportunity in those times, and that is when the good properties come on the market,” he said.

“… And I think, if the opportunity is there, you have got to grab it with both hands.

“If you over analyse things you wouldn’t be game to do it. Just do it and trust your ability that when things go bad, you will work out a way. That is my philosophy.”

Is it also about building scale, Sue Neales asked, or is it just that “they are good properties and you can’t resist them?”

“That is for sure, they are good properties and they’re hard to resist,” Mr Hughes replied.

“But it is scale. Scale is very important, in the way we do things anyway.

“Cattle and horses do really when they have got plenty of room.

“And the lower the rainfall, usually, the richer the country is. It is absolutely true.

“Large animals do very well in the dry environment. As long as you are somewhere you can get a flood, then the country gets wet, what grows there is tremendously good in those dry climates.

“And, then you have got scale.”

Properties that were “harder to buy were also usually much easier to sell”, he added. 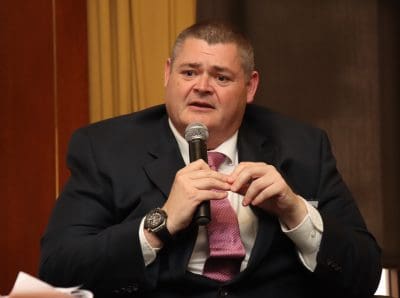 Rural property specialist Danny Thomas from LAWD said many buyers had taken the opportunities provided by the market in recent years to invest in scale to ‘future proof’ their businesses.

“Those that acted early have been able to get themselves in a situation where they’re less exposed, if not exposed at all, to these current rapid increases in interest rates,” he said.

“They have taken long term debt positions, they have been well advised and have done great work to secure the properties they have.”

Recent changes in the cost of debt were front of mind for people at the moment, with some domestic buyers “taking a breath”.

But he noted that institutional buyers were also “rolling back in” as the decline in the value of $A made Australian property more attractive.

Natural capital money was also a “sleeper in the market” and likely to be a source of further demand, evidenced by the recent purchase of Maryfield and Limbunya in the NT.

“I think you are going to continue to see some outperformance in that market,” Mr Thomas said.

Asked how high he thinks rural property values can go, Mr Thomas said his view had moderated slightly since he last offered a public opinion at the Ekka in August, when “I was still fairly positive about the trajectory of values”.

“Looking at the amount of buyers that were there against the amount of vendors,  last year we could have sold every property that we advertised six or 10 times.

“This year at the start of the year we probably could have sold it two or three times.

“You only need one, but it is nice to have a bit of competition to push people along.

While the cost of debt was having an influence on levels of demand, that influence had been lessened by the strength of the climate outlook and ongoing commodity prices.

Away from the larger scale end of the market, Brendan Egan from QRIDA said there were signs of some hesitation evident in the market for smaller family sized properties due to macro factors such as interest rates and inflation. 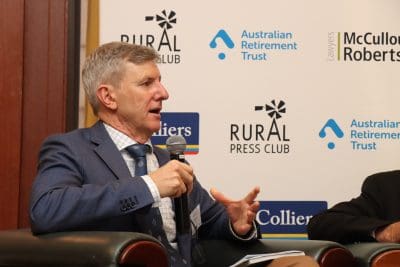 “The smaller property owners are taking a bit of a pause, just sitting back waiting to see what further is going to happen with interest rates.

“We have had five rises since May, the cash rate now is 2.35pc, and a few percent above that is what people will be paying.”

A doubling of the cost of property improvements in recent years was also having an impact.

“I guess for the smaller operators, the family farms, and even the new entrants, it is getting quite challenging to get into the market given rural property values.”